Rombauer Pulls Off Upset in Preakness 146 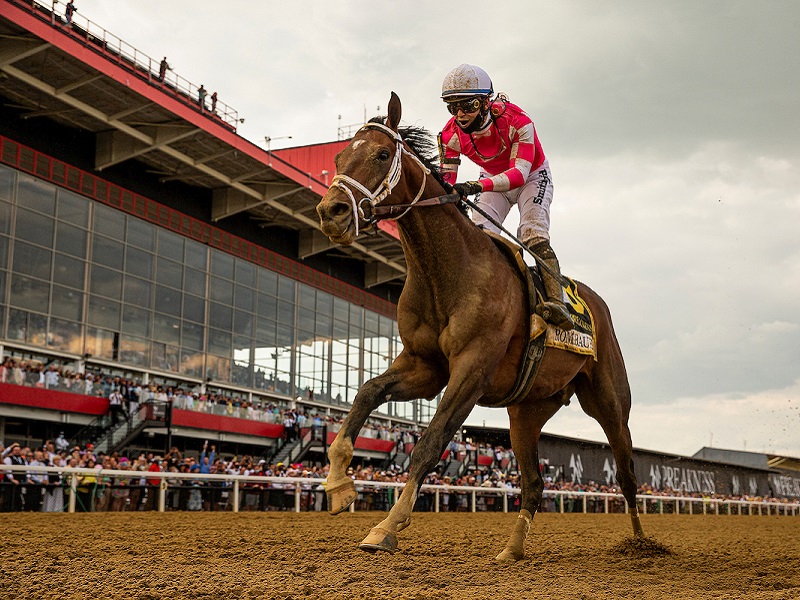 The $1 million Preakness Stakes, renewed under sunny skies and temperatures in the 70s, highlighted a 14-race program with 10 stakes, six graded, worth $2.25 million.

Zedan Racing Stables’ Medina Spirit, who led throughout the Kentucky Derby (G1) at Churchill Downs two weeks ago, faded to third after setting the pace in Saturday’s Middle Jewel of the Triple Crown.

Rombauer ($25.60), who was withheld from the Kentucky Derby by his owners in favor of waiting for the Preakness, provided trainer Michael McCarthy with his first success in the Triple Crown series with his very first starter.

Rombauer, who scored a 3 1/2-length decision over Midnight Bourbon while running the 1 3/16-mile distance in 1:53.62, had earned a fees-paid berth into the Preakness by winning the Feb 13 El Camino Real Derby at Golden Gate Fields, a ‘Win & In’ event.

Ridden by Flavien Prat, Rombauer raced between horses in sixth-place in the 10-horse field that was led by Medina Spirit along the front stretch and around the first turn. The pacesetting 2-1 favorite, who set fractions of 23.77 and 46.93 seconds for the first half-mile, was closely shadowed to his outside by Midnight Bourbon along the backstretch and into the far turn. Medina Spirit and Midnight Bourbon showed the way into the stretch as Rombauer began to launch a strong bid on the final turn. Midnight Bourbon edged past the pacesetter in mid-stretch, but Rombauer loomed boldly on the far outside and continued on to register a decisive victory.

McCarthy, a former longtime assistant to Todd Pletcher, was enthusiastically congratulated by his former boss, the Hall of Fame trainer-elect who saddled Unbridled Honor in a quest to saddle his first Preakness winner.

Although they bypassed the Kentucky Derby, the Fradkins, who bred the Preakness winner, and McCarthy indicated their intentions to run Rombauer in the June 5 Belmont Stakes (G1), the 1 1/2-mile third jewel of the Triple Crown at Belmont Park.

Winning Trainer Michael McCarthy (Rombauer): (NBC Telecast) “I’m so proud of this horse, everybody involved. It means a lot to be here and participate on a day like this. I’m happy for the Fradkins [owners John and Diane Fradkin]. It just goes to show you that small players in the game can be successful, as well. Hats off to everybody. I wish my family could be here. Fantastic.”

“That’s been him all along. I reached over my shoulder and said to somebody, ‘You know what? He’s a little bit closer today but it looks like he’s traveling well. At the three-and-a-half furlong pole I saw some horses around him moving and not really going anywhere. Coming to the quarter pole, I started to get a little excited. The two horses in front of him were traveling well. At the eighth pole, I’ve said it before, it was like an out-of-body experience.”

First congratulations came from former boss Todd Pletcher – “Everything we do sort of channels what we did when I worked there. I kind of always try to refer to something he would do. Strange to believe that I’ve won something he hasn’t. I’m sure that won’t last for long. It means the world to me.”

“It’s great. I wish my family was here.”

On talking to Pletcher and Hall of Fame trainer D. Wayne Lukas before race – “You’ve got one icon and one living legend. I didn’t want to leave there flat-footed so I had to surprise them.”

Winning Jockey Flavien Prat (Rombauer): (NBC Telecast) “It does feel different. Oh, what a feeling. I’m so thankful to [trainer] Michael [McCarthy] and all his team. I want to thank the groom and the pony girl, because he was quite on his toes before the race and I thought they did a great job.”

“To be honest, when I left France it was to do better than what I was doing in France. I didn’t know the magnitude of these races. I knew a lot about the Breeders’ Cup but the Triple Crown I didn’t know much about it. I realize how important it is. There’s so much history behind these races. To win one is amazing. To win the Preakness, it’s even better.”

Trainer Steve Asmussen (Midnight Bourbon; 2nd): “Irad gave him a dream trip. When he went under the wire the first time, I was thinking, ‘Man, I wish the Derby would have looked like that.’ But he ran hard; he really did. You want to win them all and stuff. And with their [Winchell Thoroughbreds’ program], we’ll get here. But I thought he ran extremely well. He showed up and he ran his race. Congratulations to the winner. But he took it to Medina Spirit. I think he showed some true ability, and he’s a very good horse that’s getting better.”

Jockey Irad Ortiz Jr. (Midnight Bourbon; 2nd): “ He broke sharp and I didn't have to use him. We were sitting second, running easy, nice and relaxed without chasing. I felt like I had a good shot to win. It was perfect. He changed leads and did everything right. Off the turn, I asked him for run and he took off. ‘If they gonna beat me today, somebody really gonna have to come running.’ And that was Flavien [Prat], flying on the outside. My horse ran great, he just got beat.”.

Jimmy Barnes, assistant to trainer Bob Baffert (Medina Spirit; 3rd and Concert Tour, 9th): “It looked like [Medina Spirit’s Jockey] Johnny [Velazquez] got him into the spot where he wanted to be. That horse was right on him the whole way and never really gave him a break. It’s tough going back in two weeks off of that race. A little disappointed, but we go on from here.

“I still need to talk with [Concert Tour’s jockey] Mike [Smith] a little bit. He said he was out of horse turning for home at around the three-eighths pole.”

Jockey John Velazquez (Medina Spirit; 3rd): “I knew he was going to be pressed today and I was hoping he wasn’t going to overdo it but he did. By the quarter pole, the other horse put his head in front but he kept fighting. He didn’t stop he just got beat. He kept running he still finished third. Most horses at the quarter-pole like when they get passed they just give up and he kept running. You gotta give it to him.”

Jockey Mike Smith (Concert Tour, 9th): “As far as Concert Tour goes, I am at a loss for words. He didn’t seem to participate at all down the backside. He just wasn’t going anywhere and when I put my hands down he just backed right off, it was very strange.”

Trainer Robertino Diodoro (Keepmeinmind; 4th): “He ran well. He ran his race. No excuse. He was running at the end. We’re happy. Don’t want to be happy with fourth. You always want to win. He ran well, though.”

Jockey David Cohen (Keepmeinmind; 4th): “We got the setup we were hoping for. My horse really turned off and relaxed well. I started making a move, saved ground and tipped out. Just like the Derby, he was the only horse running and closing at the end. He galloped out well and not tired. When it comes time for the Belmont, I don't think he will have any problem getting the distance.”

Trainer Chad Brown (Crowded Trade; 5th and Risk Taking, 8th): “Neither one of them ran well. It was disappointing. They just didn’t fire at all. They ran very poorly. I’m disappointed. It is what it is. We’ll just have to bring them home and regroup with them."

Jockey Javier Castellano (Crowded Trade; 5th): “We had a good trip and broke well out of the gate. I put him in a good spot and saved ground on the first turn. On the backside he just couldn’t keep up with the pace.”

Jockey Jose Ortiz (Risk Taking, 8th): “I broke good and wanted to go forward on the first turn. I tried to put him as close as I could. I tried to give him a break on the backside, but when we hit the far turn, I knew it was over.”

Trainer Todd Pletcher (Unbridled Honor; 6th): “The one thing we were hoping we could do, we knew we would be a little bit further back early on. But we were hoping we could get some position down on the rail. It seemed like it was a better part of the track. But, he closed with mild interest. He just got too far back on a track you really can't do that on.”

(Pletcher on former assistant Michael McCarthy): “I’m very, very happy for him. He deserved it. Very happy. Like I said earlier – all those guys that were part of the team – so I was rooting for him if we couldn't do it.”

Jockey Luis Saez (Unbridled Honor; 6th): “It was a good trip, he broke pretty nice but he didn’t like the dirt in his face. He kind of kept going back and back and at the half mile pole I was riding him and he gave me a little kick but it wasn’t much. The winner and the other horses were already gone.”

Trainer Hideyuki Mori (France Go de Ina; 7th): [Through an interpreter] “He started pretty well but the position he ended up taking there was a bit of kickback and he hates kickback. He was fighting it. It's a little disappointing. We really hoped he would get a spot outside of horses where he wouldn't get any dirt kicked in his face and I think that would have helped him focus more on the race. He didn't show his full potential today."

Jockey Joel Rosario (France Go de Ina; 7th): “He ran good, better than last time. He was sitting good for a little while and then he got a little tired. This was a little different for him, he was looking around and checking everything out, he wasn’t sure. But you know he did fine.”

Jockey Ricardo Santana Jr. (Ram; 10th): “I wasn’t in a great spot. It was my first time riding him so I didn’t know much about him. He tried hard. Just got outrun.”