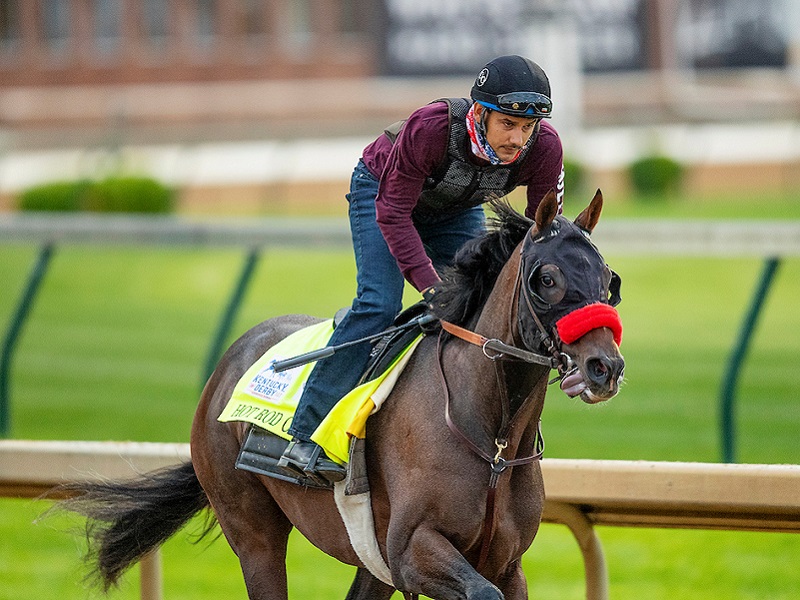 ARCADIA, Calif. (May 28, 2021) — Idle since a close third in the Kentucky Derby on May 1, Doug O’Neill’s Hot Rod Charlie drilled five furlongs before Friday’s first race at Santa Anita in 1:00.48, his final prep for the Grade I Belmont Stakes at a mile and one half a week from Saturday, June 5.

With Flavien Prat aboard, Hot Rod Charlie, who was accompanied by O’Neill’s Hall of Fame gelding Lava Man and workmate Liam’s Pride, came on Santa Anita’s main track via the quarter mile chute at 12:14 p.m. PT, jogged by the Grandstand and was then set down for his work at the five furlong pole with Liam’s Pride positioned about two lengths in front of him as a target.

With Prat sitting still, Hot Rod Charlie rattled off splits of 24.06 and 48.32 while gaining the advantage an eighth of a mile from the wire.  With Prat remaining motionless, Hot Rod Charlie galloped out six furlongs in 1:13.62.

“Very happy with his breeze today,” said O’Neill.  “Flavien was happy with the way he did it and that makes me happy.  He had a good strong gallop going into this work and now he’s got a strong work and gallop-out going into the race.

“We just want to stay injury-free and we’re pumped up and optimistic about a week from tomorrow.  This horse is getting more and more confident and he’s starting to separate himself from the others.  He’ll leave Saturday morning at about 3 a.m., along with Lava Man, who’s going to take him to the post for the Belmont.”

A winner of the Grade II Louisiana Derby two starts back on March 20, Hot Rod Charlie, who broke his maiden at Santa Anita going a flat mile in his fourth start on Oct. 2, was third, beaten a neck three starts back by eventual Kentucky Derby winner Medina Spirit in the Grade III Robert B. Lewis Stakes here on Jan. 30.

Owned by Roadrunner Racing, Boat Racing, LLC, Strauss Bros Racing and Gainesway Thoroughbreds, Ltd, Hot Rod Charlie, who is a Kentucky-bred colt by Oxbow, out of the Indian Charlie mare Indian Miss, is 8-2-1-3, has earnings of $1,305,700.

Prat, who won the Grade I Preakness Stakes on May 15 aboard the Santa Anita-based Rombauer, made the decision to stick with Hot Rod Charlie, who skipped the Preakness, for racing’s third and final jewel.