World Approval on to Breeders' Cup After Woodbine Mile Win 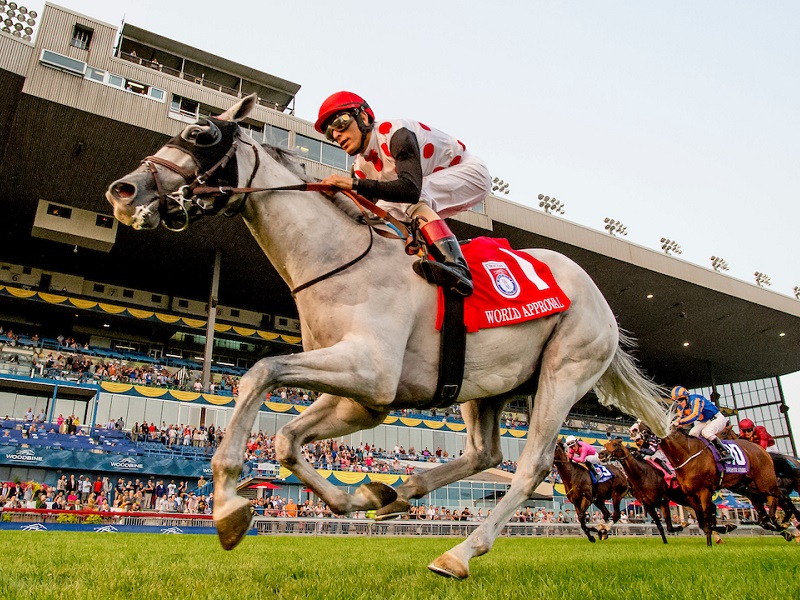 Success in the $800,000 Ricoh Woodbine Mile earned World Approval a guaranteed berth in the Breeders’ Cup Mile, a one-mile turf race for three-year-olds and upward which will be run at Del Mar on November 4.

And trainer Mark Casse, who missed his Woodbine Mile win for the second straight year and was contacted by phone at Keeneland, is eager to take up the Breeders’ Cup officials on their offer on behalf of owner/breeder Charlotte Weber.

“As long as he's healthy, we are going to the Breeders' Cup,” said Casse. “Am I confident we can win? I don't think I would change places with anybody.”

World Approval rode the rail while close or on the front end throughout the Woodbine Mile and pulled away in early stretch with a knockout 2 ½ length tally under John Velazquez.

"He was going so well the whole way around,” said Velazquez, who was extending his record number of Woodbine Mile winners to five.

“I was just hoping when he switched down the lane and I asked him that he would respond. That's exactly what he did. As soon as he switched, I let him know, he took off. He was ready.

"I wasn't sure who the speed horse was going to be and I see he's always been pretty close to the pace, not on the lead, but pretty close,” said Velazquez, who was riding World Approval for the first time.

“He broke well today, no one seemed to want the lead, I just kind of left him there and he held on very well."

Breaking from the inside post, World Approval was sitting just a head off pacemaker Dragon Bay through honest fractions of :23.77 and :46.45.

Deauville was close up in third and moved into second as World Approval hit the front through six furlongs in 1:10.31.

The backfield was in motion turning for home as Lancaster Bomber, Long On Value, Mondialiste and Arod launched their rallies, but World Approval had found another gear by then and the 2017 Woodbine Mile was history.

Lancaster Bomber, one of five European invaders for the Woodbine Mile and looking to become the first three-year-old to win the race, was the first to arrive and finished second as the 4.55-1 third choice, a half-length before 9.60-1 Long On Value.

One of two runners in the field for trainer Aidan O’Brien, Lancaster Bomber was ridden by Wayne Lordan.

“I thought the race was run really steady for my horse,” said Lordan. “He quickened well and got to the line well. He ran a good race. He finished out good.

“Maybe a stronger pace might have helped, but he ran a good, solid race.”

Long On Value, shipping from New York for conditioner Bill Mott, did not have the smoothest of sailing for jockey Joel Rosario, but edged Mondialiste by a nose for third money.

“I just didn’t have any luck to get out,” said Rosario. “In the end, I never got through and had to point towards the outside and he lost a little momentum. He ran a very impressive race.”

Mondialiste, based in England and the winner of the 2015 Woodbine Mile, had to settle for fourth money this time at odds of $13.65-1.

A half-length back Arod recorded a second fifth-place finish in the Woodbine Mile and was followed by another half-length by fellow European shipper Dutch Connection.

Conquest Panthera, a second Casse entrant, was coming off a win in the Grade 2 Play the King, the main local prep for the race, but finished seventh after racing forwardly to the final furlong.

With Casse absent, assistant trainers David Adams and Kathryn Sullivan did the honours on Saturday.

"It's always sweet to win big races, but it means more at Woodbine," said Casse.

"We had horses running all over the place and Mrs. Weber said she was going so I said, 'Well, can you handle it?' and she said she could. I was at command central in Keeneland buying horses and we had them running everywhere so it was last minute and I just decided not to come. She said she was going. We're trying to buy the next Woodbine Mile winner."

"I couldn't be more thrilled, more excited for the farm, for Woodbine,” said Charlotte Weber, mistress of the Live Oak operation. "I've been waiting to win here and be here so this is it."

"Johnny did a beautiful job, he saved ground, the horse seemed to be happy where he was and he just stayed there and took the race away. I am thrilled."