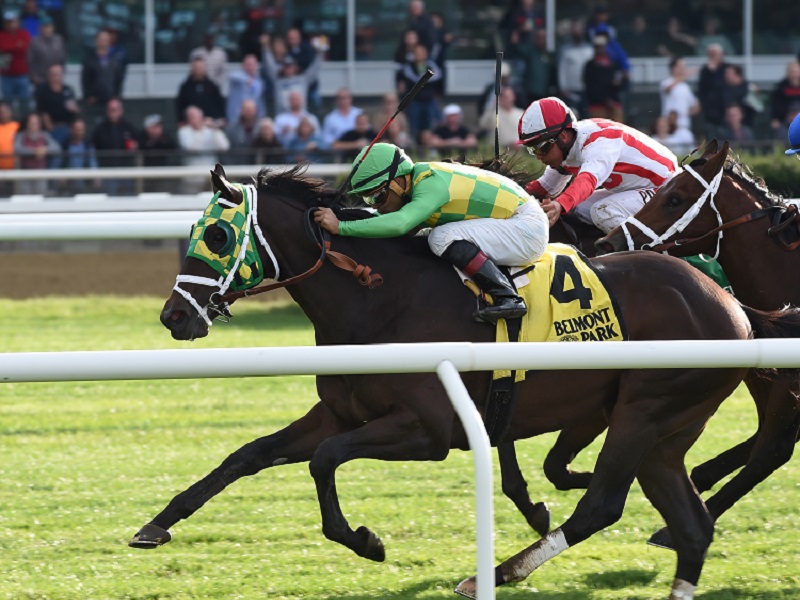 ELMONT, N.Y. - Making only his third career start and wearing blinkers for the first time, Donegal Racing's Seabhac rallied late to break his maiden, winning the Grade 3, $200,000 Pilgrim on Saturday at Belmont Park.

Breaking from post 4 with Luis Saez aboard, the pair stalked from second position as Looking Ready led the field of eight through fractions of 24.61 seconds for the opening quarter-mile, with the half in 49.51.

At the quarter-pole, stablemate Maraud began to make a run toward the leader shifting from the two-path to the rail while 6-5 post-time favorite Voting Control began to make his way from the back of the pack.

Grabbing the lead at the eighth-pole, Seabhac held off Maraud and a late charging Voting Control to secure the victory by a half-length.

"It was just a good trip," said Saez. "It was pretty exciting. He broke pretty good. He was right there, and when I asked him at the three-eighths, he just took off. When he came into the stretch he was running. I can't wait to ride him next time.

Finishing second by a half-length in his debut at Saratoga Race Course on August 5, Seabhac followed up with a fourth-place finish in the Grade 3 With Anticipation before finally putting things together today, winning trainer Todd Pletcher said.

"I think blinkers and experience; a combination of those things helped," said Pletcher." "He ran good races both times at Saratoga. He just encountered a little bit of traffic, especially in his first start. He seems like a talented colt who is still figuring it out."

"We were hoping he would break a little more alert and put himself in a good spot. If you watch the replay of the [Grade 3] With Anticipation, he got stopped pretty hard at the quarter pole and it was kind of an impossible spot to rally from, but he still closed well. Johnny [Velazquez, rider on Seabhac's first two starts] just said if we use blinkers, he should have a little more confidence, and he was right."