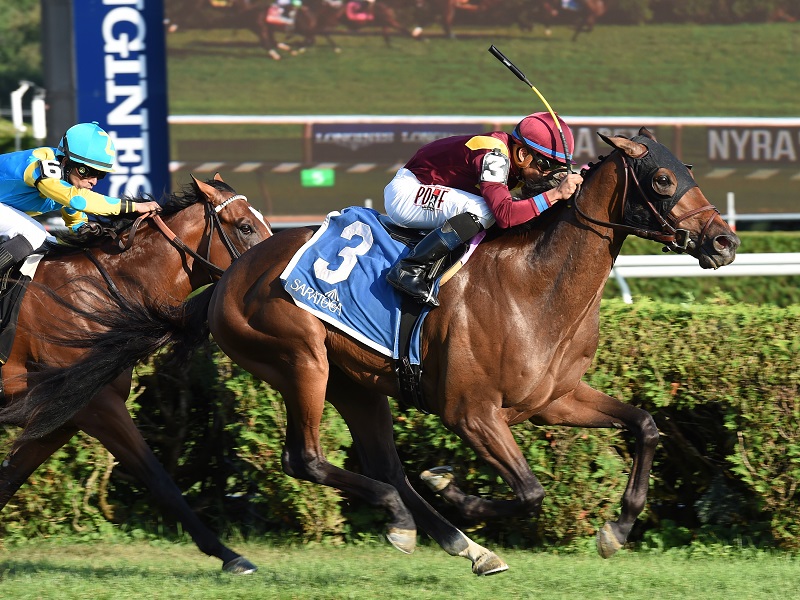 SARATOGA SPRINGS, N.Y. - Robert LaPenta's Catholic Boy overcame a bump at the start and traffic in the final turn, before finding space in the stretch and pulling away from a talented field of 2-year-old turf runners to win the Grade 3, $150,000 With Anticipation by one length on Wednesday at Saratoga Race Course.

After bumping with Catholic Boy at the start, Earth dueled with Trumpi to lead the field of 12 through fractions of 23.19 seconds for the quarter, 47.02 for the half. Catholic Boy sat nearly five lengths back along the rail through the backstretch and into the turn, before hitting traffic entering the stretch. Seeing an opening to the outside, jockey Manny Franco coaxed Catholic Boy into space before chasing down Irish Territory at the wire, completing the 1 1/16 miles on the Mellon turf in 1:40.94.

"I just followed instructions," Franco said. "I just tried to break and get position, and that's what we did. It worked out good. I had a lot of horse under me and I was trying to find my way out. I had to wait a little longer than I wanted, but the hole opened up, and I had a lot of horse left and we won."

The win was the second for the More Than Ready colt in two tries, following a two-length maiden win at 7 ½ furlongs at Gulfstream Park on July 20. Trainer Jonathan Thomas said he wasn't surprised his colt handled the added distance and two turns.

"He's screaming for distance. We had [options to run in] the seven-furlong race at Kentucky Downs and the mile race at Del Mar, but with Mr. LaPenta being a New Yorker, and this is my second home, being able to come up here and get the trip-of-ground we needed was important.

"I'm impressed with him knowing he didn't get the cleanest trip and he negotiated some pockets and holes and overcame it. Obviously, the goal would be to get to the Breeders' Cup from here with possible start in the [Grade 3] Pilgrim [at Belmont Park on September 30] in between, but we'll see."