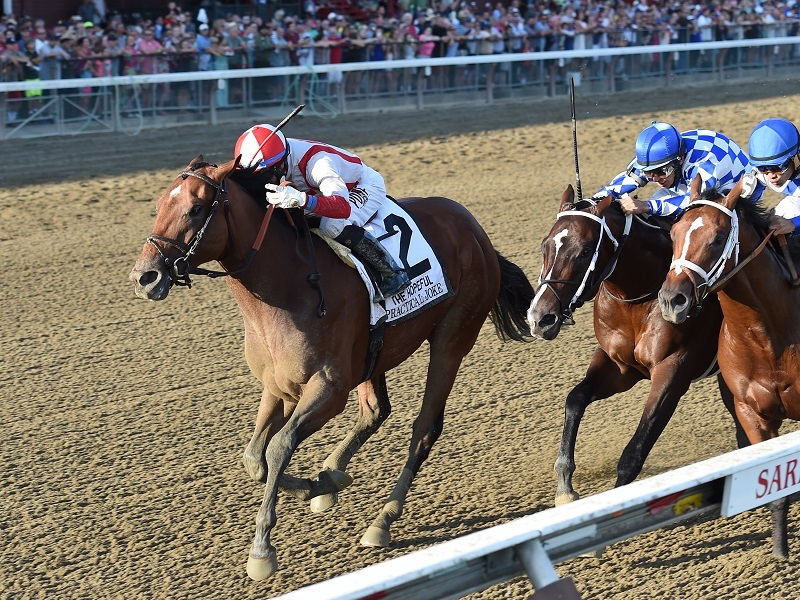 Breaking from the rail as the 2-1 favorite with Joel Rosario aboard, Practical Joke settled early in seventh position along the rail as Takaful led the field of nine through fractions of 22.36 seconds for the opening quarter-mile with the half going in 45.05.

Picking off runners one by one heading to the quarter-pole, Practical Joke was swung out to the two-path engaging the leader. Set down in a full drive, Practical Joke passed Takaful at the sixteenth-pole and went on to secure the victory by 1 ¼ lengths.

He completed the sprint in 1:21.96. The Allen Jerkens, formerly known as the King's Bishop, was Practical Joke's first try at seven furlongs since winning the 2016 Grade 1 Hopeful at the Spa as a 2-year-old.

"His best races are around one turn and he always tries hard," said Rosario. He's a very good horse. He showed that today. I had a great trip. I was just watching for traffic and waiting for the right time to make my move moving forward. Around the turn he just started picking up horses like the great horses he is. I was able to ride him with a lot of confidence the whole time."

The Into Mischief colt returned $6 for a $2 win wager as picking up his second graded stakes victory in his last three starts, following a two-length victory in the Grade 3 Dwyer on July 8. With a 5-2-2 record from 10 career starts, the Allen Jerkens win boosted Practical Joke's career earnings to $1,695,800.

"To cut back all the way to seven-eighths after a tough race in the Haskell, I'm so proud of this horse," said winning trainer Chad Brown. "He's so versatile. It was his third race in seven weeks. He's our iron horse."

"The rail draw can be tricky going seven-eighths. I was a little worried about it when it came out. With Joel, we talked about it yesterday in my office. He said, 'I'm not worried about it. I think there's enough speed and we'll get spread out a little bit and have a little separation on the backside.' He commented the horse has been breaking well from the gate and he wasn't really worried about it, and he was right.

Now with a perfect 4-for-4 in one-turn races, Brown said he would next consider a start in the Breeders' Cup Dirt Mile.

"Looking at the Breeders' Cup Dirt Mile, it's a tricky race because it's around two turns. He's undefeated on one turn, but the mile distance seems perfect for him, so if I had to guess right now, that's where we'll end up," added Brown. "I'll talk to the owners about it, enjoy this and of course observe the horse."