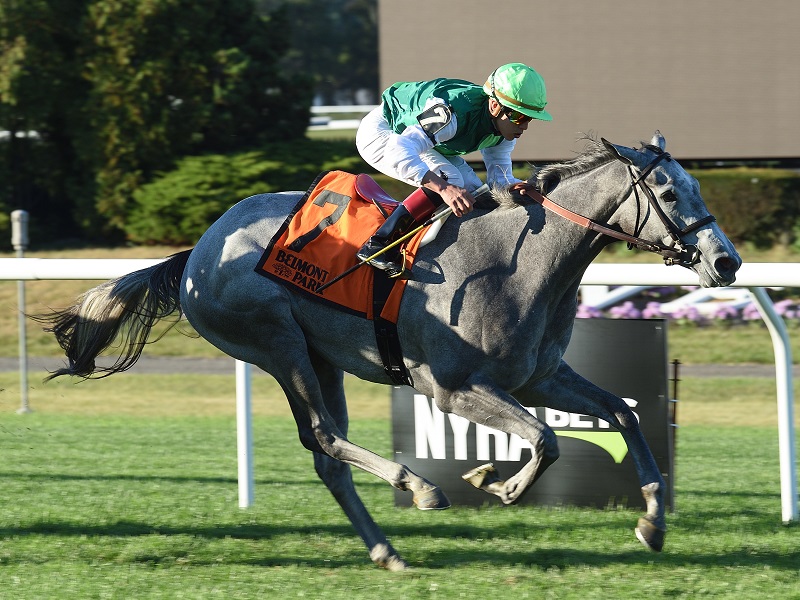 ELMONT, N.Y. - A new contender for the Breeders' Cup Juvenile Fillies Turf has emerged in Stephanie Seymour Brant's Significant Form, who took command during the stretch drive to win the Grade 3, $200,000 Miss Grillo by a length in 1:42.29 for 1 1/16 miles on the inner turf.

Significant Form, the lightest raced filly in the field of nine, was making only her second career start after appearing to break her maiden in her debut at Saratoga. After it was determined by the stewards that she closed off a foe after clipping heels at the seven-eighths mark, the daughter by Creative Cause was disqualified and placed seventh. Her effort that day, and subsequent works that followed allowed her trainer Chad Brown to forwardly place her against other 2-year-olds whose form showed more seasoning.

"In her first start, it was an unfortunate situation where she was disqualified, but we understand the decision and the situation," Brown said. "She's trained forwardly in the mornings since that race and today she got a good trip and really showed great ability. I was really impressed with how she fought back late in the stretch when the 8 horse [Best Performance] challenged her. This win is really encouraging going forward and heading into the Breeders' Cup [Juvenile Turf Fillies on November 3 at Del Mar]."

On paper, the race lacked a true pacesetter, but upon the early going Luis Saez sent Life Time Citizen from the rail to set the early fractions of 24.60 seconds for a quarter-mile, and a half-mile in 49.23 while Southampton Way, making her debut on grass after three successful trips since her debut, followed in close pursuit.

Significant Form, under Irad Ortiz, Jr. sat quietly in third with Codrington close to her flank followed by Orbolution, who was given an outside trip in fifth. Once the field headed into the stretch, Significant Form in a good spot after remaining in the three and four path, took advantage of the soft fractions and was put to a drive under Ortiz while Orbolution and Best Performance, never worse than second through four starts, applied pressure to her outside.

In deep stretch the trio made their way to the wire, but Significant Form had enough to hold off Best Performance by 1 ¼ lengths as it was another 2 ¼ lengths back to Orbolution while Bramble Queen came on for fourth.

"She broke good and we were really close," Ortiz said. "We weren't going too fast. We ran a little slow, so I wanted to just hold my position. I was good where I was. I knew when I'd asked her, she'd be there for me.

"She's comfortable," he added. "Going a mile and a sixteenth as a 2-year-old first time out [maiden win on August 27], it's hard. She has a lot of talent and she did it. Coming back today, I knew she'd be better because she already had [the distance]."

Significant Form became the sixth Miss Grillo winner for Chad Brown, and second in a row since he captured the 2016 edition with New Money Honey. Brown saddled 2014 winner Lady Eli, his first back to back victory in the race after he won with Watsdachances the year prior. His first win came in 2008 with Maram.