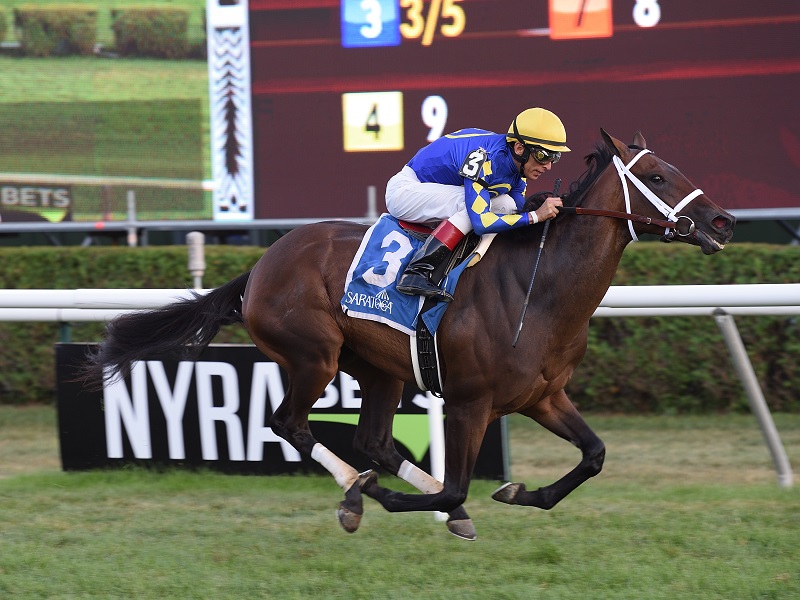 SARATOGA SPRINGS, N.Y. - StarLadies Racing's Orbolution lived up to her 3-5 odds riding the rail and romping to a 4 ¾ lengths victory over a field of seven in the 13th running of the $100,000 P.G. Johnson for 2-year-old fillies.

After a good break, Orbolution sat right behind leaders Mentality and Oldfashioned Style as they lead the field through modest fractions of 24.08 seconds for the quarter-mile and 49.79 for the half. Hall of Fame jockey John Velazquez kept Orbolution along the rail through the backstretch and the final turn before urging his filly past Mentality through a small space along the rail before easily drawing clear of the field to complete the 1 1/16 miles on the inner turf in a time of 1:43.18.

"I was really confident. Right when I got to the first turn I saw the horses getting out pretty bad in front of me and I was like 'Let me go right behind [Mentality]' and I'm assuming she's going to take a little longer now that I caught the horse," Velazquez said.

"Once we got to the three-eighths pole and she was still having a hard time out there, and when that other horse [Mentality] got to her outside she got let go a little bit. Normally that happens, when you get let go they try to get out again and sure enough when she let go a little bit she got out there quickly and she took it right away. Her acceleration was incredible, she took her spot there [on the rail] and went away very quickly, very nice."

This was the second straight win for the Orb filly, out of the Grade 3-placed mare My Rachel by Horse Chestnut, following a 2 ½-length maiden victory at 1 1/16 miles on July 23 at Saratoga. The victory brings the Todd Pletcher trainee's career earnings to $125,800.

"I trained the mare, My Rachel, and she was nice on the turf, so we weren't surprised that she ended up on the turf," Pletcher said. "She was training pretty well on the dirt and she was precocious. She was ready to go early. Once we got the opportunity to put her on the grass, it allowed her to show what she's capable of.

"It's pretty impressive for a young filly. It wasn't a big hole that she shot through. She has a great turn-of-foot. Tactically, she's ratable, so it was a good position to be in. She seems to be doing so well at the moment. She's thriving and I think she's gained weight since her last race. She just seems to be physically developing. We'll play it by ear, she [gaining] a lot of experience so far."