Elate Explodes Down the Stretch to Win G1 Beldame 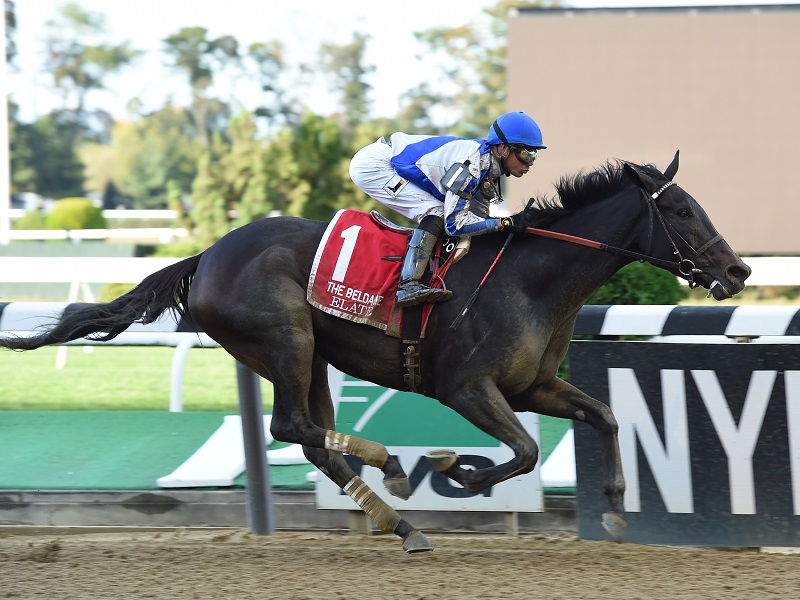 ELMONT, N.Y. - There may be no better time for Elate to advance atop the scene among the best fillies and mares in the country, and her winning effort in the Grade 1, $400,000 Beldame proved she belongs after exploding through the stretch to win by 8 ¼ lengths while under wraps by jockey Jose Ortiz in 1:50.21 for the 1 1/8 miles around the Belmont Park main track.

The 3-year-old filly by Medaglia d' Oro was given her usual patient trip under Ortiz while sitting along the inside behind Money'soncharlotte, shipping in from Monmouth in search of her fifth straight victory, and longshot Bishop's Pond. It was the former who took the early lead in an opening quarter of 23.36 seconds, but the latter then put her head in front with a half-length separating the two with a half-mile timed in 47.08. Elate continued to rate in third, and with three quarters run in 1:12.10, it was then time to see what Elate, the public's betting choice at 1-5 would bring to the fight.

Ortiz gave a few anxious moments as both he and his filly were narrowly bottled behind the front running pair, but as Bishop's Pond took to the rail, and Money'soncharlotte was to her outside, Ortiz and Elate split both, and suddenly they were through and in front, while Ortiz took a look back, and let his filly stride away with ease to the wire giving Hall of Fame trainer Bill Mott a sigh of relief.

"I have a lot of confidence in the horse and the rider," Mott said. "Sometimes you're stuck down in there, and you get stuffed, but the length of the stretch, to do it, and you could tell he was sitting there loaded, you don't know what's going to happen, but I didn't lose any confidence."

For Ortiz, all he needed was a little room, as his filly who he was riding for the seventh time had plenty still left for the stretch drive.

"When he [Irad Ortiz, Jr.] hit her [Bishop's Pond] left handed and she came over a little bit, that's when I squeezed [through].," Ortiz said. "But when she put her head in, she was all the way. She just blew by them. I was very confident on the turn, I knew I had them. I had a lot of horse just nowhere to go, but a lot of horse. I could have come out at the sixteenth pole and we would have been away. I had a lot of horse."

The Beldame was Elate's fourth career victory, and second Grade 1 after she won the Alabama by 5 ¼ lengths at Saratoga Race Course which followed her narrow defeat to prospective champion filly Abel Tasman in the Grade 1 Coaching Club American Oaks.

The filly Mott described post Beldame as a once-steady grinder who lacked explosiveness, now has matured into a strong contender, and will most likely ship to California for a start in the Breeders' Cup Juvenile Fillies at Del Mar after conferring with owners Adele Dilschneider and Claiborne Farm.

"I was quite impressed with the acceleration she showed today when she did get through. I think that part of her has improved as the year's gone on. She's learning how to use her speed. We've had a good year. Anything we do from here on out is icing on the cake."

Money'soncharlotte finished as the runner-up, while Eskenformoney closed well from mid pack to finish third.