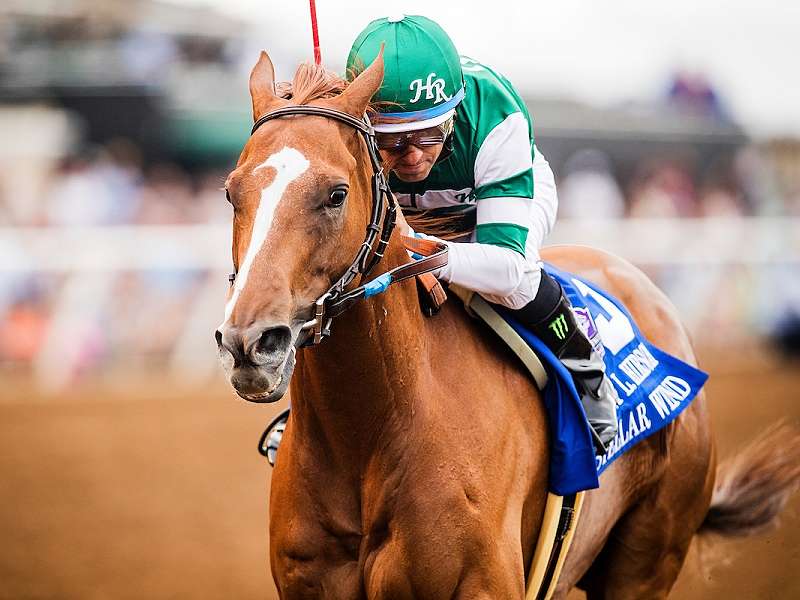 Making it three wins and no losses against Vale Dori, Stellar Wind stalked her front-running foe from shortly after the break under jockey Victor Espinoza, edged to the lead in the upper stretch and continued on strongly to win by a neck, the same margin she won by in the Beholder Mile at Santa Anita in early June.

Faithfully ran well to be third, a length and one-half behind the first two mares and two and one-quarter lengths in front of Motown Lady. Autumn Flower was fifth and last. Withdrawn from the original field was Shenandoah Queen.

Stellar Wind, a daughter of Curlin trained by John Sadler, went postward as the 1-2 favorite and paid $3, $2.10 and $2.10. It was her tenth victory in 15 career outings and first money of $180,000 increased her lifetime earnings to $2,233,200. Also, it was her second straight win in the Hirsch, having upset Beholder in the event last summer.

The Clement L. Hirsch Stakes is a “Win and You’re In” qualifying race for the $2 million Breeders’ Cup Distaff, set for Friday, Nov. 3 at Del Mar. Thus, Stellar Wind earned an automatic berth in the BC race in which she was second to Stopchargingmaria in 2015 and fourth behind Beholder and Songbird in 2016. She was an Eclipse Award winner as champion three-year-old filly of 2015.

Runner-up Vale Dori, again valiant in defeat under Mike Smith, went to the gate at 2-1 and returned $2.60 and $2.10, while Faithfully, Vale Dori’s stablemate from the barn of trainer Bob Baffert, paid $2.40 to show.

Miss Sunset, sent postward at 4-5, shook off 5-2 second choice Dreamy Gal entering the stretch and drew off to an easy victory. Queen Bee to You, a 15-1 longshot, rallied well to shade Dreamy Gal for second, with All of a Sudden fourth in the field of eight fillies.

Miss Sunset, owned by Klein and Lebherz and trained by Jeff Bonde, earned a prize of $85,500 with her fifth win in nine starts. The Into Mischief filly returned $3.60 to her backers Sunday.

The stakes win was the second of the meet for rider Espinoza and his third in this race, including a score with the same horse last year. He now has 92 stakes wins at Del Mar, eighth-best among all riders.

The stakes win was the second of the meet for trainer Sadler and his fourth in this race, including a score with the same horse last year. He now has 57 stakes wins at Del Mar, sixth-best of all time.

Stellar Wind is owned by the Hronis Brothers – Kosta and Pete – of Delano, CA.

VICTOR ESPINOZA (Stellar Wind, winner) – “Once she broke (well), I felt the race was all over. I have so much confidence in her, I knew she’d win. And she showed me to be right again. I had that other horse (Vale Dori) measured. I knew I could win. It was a good race; side by side down the stretch. But I was going to be the winner. I had to win it for John (trainer Sadler). It was his birthday. And my horse had plenty left; she still had plenty in the tank.”

RAFAEL BEJARANO (Faithfully, third) – “No excuses. Those two in front of us are good.”

KENT DESORMEAUX (Motown Lady, fourth) – “She was very keen early to go. But then at the end she stayed on. I think there may be better to come with her.”

JOHN SADLER (Stellar Wind, winner) – “Just what I wanted for my birthday. She ran really well. I was nervous because of the way favorites have fared here. But she’s a good mare, she came through and she stuck her nose out at the end like she usually does. It looked like it was going to set up pretty much like the last race; Vale Dori is the speed. We know we can’t sit off her too far, you’ve got to hook into her and wear her down. No plans (for a next start) now. We’ll start looking tomorrow. But for now, we’re really happy.”