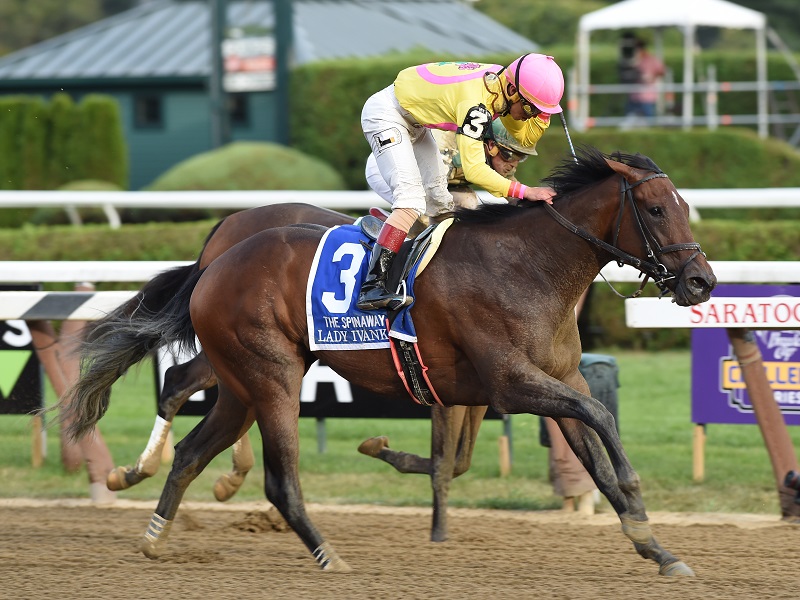 SARATOGA SPRINGS, N.Y. - Lady Ivanka ran down Maya Malibu in deep stretch and fended off her rival by three-quarters of a length to capture the 126th running of the Grade 1, $350,000 Spinaway for 2-year-old fillies on Saturday at Saratoga Race Course.

Twin Creeks Racing Stables' Pure Silver and Klaravich Stables' Separationofpowers dueled for the lead, with the former leading the five-horse field through a quarter-mile in 22.36 seconds and the latter taking command to go a half-mile in 45.30.

Under jockey Irad Ortiz, Jr., Lady Ivanka stalked before going four-wide out of the turn to overtake the pacesetters. Hall of Famer Javier Castellano piloted Maya Malibu to the lead from the inside and maintained the advantage until Lady Ivanka surged ahead in the final jumps, completing the seven-furlong sprint in 1:24.97.

"I got a perfect trip. I broke out of there and just sat there and waited," said Ortiz, who won his second consecutive Spinaway after leading Pretty City Dancer to a dead-heat victory in 2016. "We were clear on the turn and when I asked her she was there for me. She was ready. Rudy [Rodriguez] did a good job with her. Her last race was impressive and she did it in a good way. Now, here we are in a Grade 1 and she did it."

Lady Ivanka won her debut for trainer Rudy Rodriguez on August 9, posting an eight-length score at 5 ½ furlongs at the Spa. The Tiz Wonderful filly handled the step up in class three weeks later, going off at 5-1 and paying $12.40 on a $2 win wager. She more than tripled her career earnings to $199,800.

"It was a tough test but we got it done," said Rodriguez, who also won the 2014 Spinaway with Condo Commando. "I was not confident at all [turning for home] because I saw that the other horse was coming on the inside, and Javier is one of the best riders in the country; they opened the rail for him and I was concerned. I was hoping that he would wait a little longer, but I'm not on top here, so I thought if he waited a little longer maybe we could wait for whatever they were going to do, but it worked out.

"I think she's very good, she's got a very good mind," he added. "She can see, like you see, she's just sitting there behind horses, she's been doing that in the morning all the time, so I think she can stretch out."

Separationofpowers, the 3-5 favorite for trainer Chad Brown, finished third in her stakes debut. The daughter of Candy Ride had won her debut by 11 ¾ lengths on July 30.

"The post killed her. It was a bad draw and she got hounded the whole way," Brown said. "She did all the dirty work there and I'm proud of her she worked hard, but it's just not a good situation to be drawn inside of a real fast horse like Pure Silver and set it up for another horse [Lady Ivanka]."

Pure Silver and Obvious Two completed the order of finish.