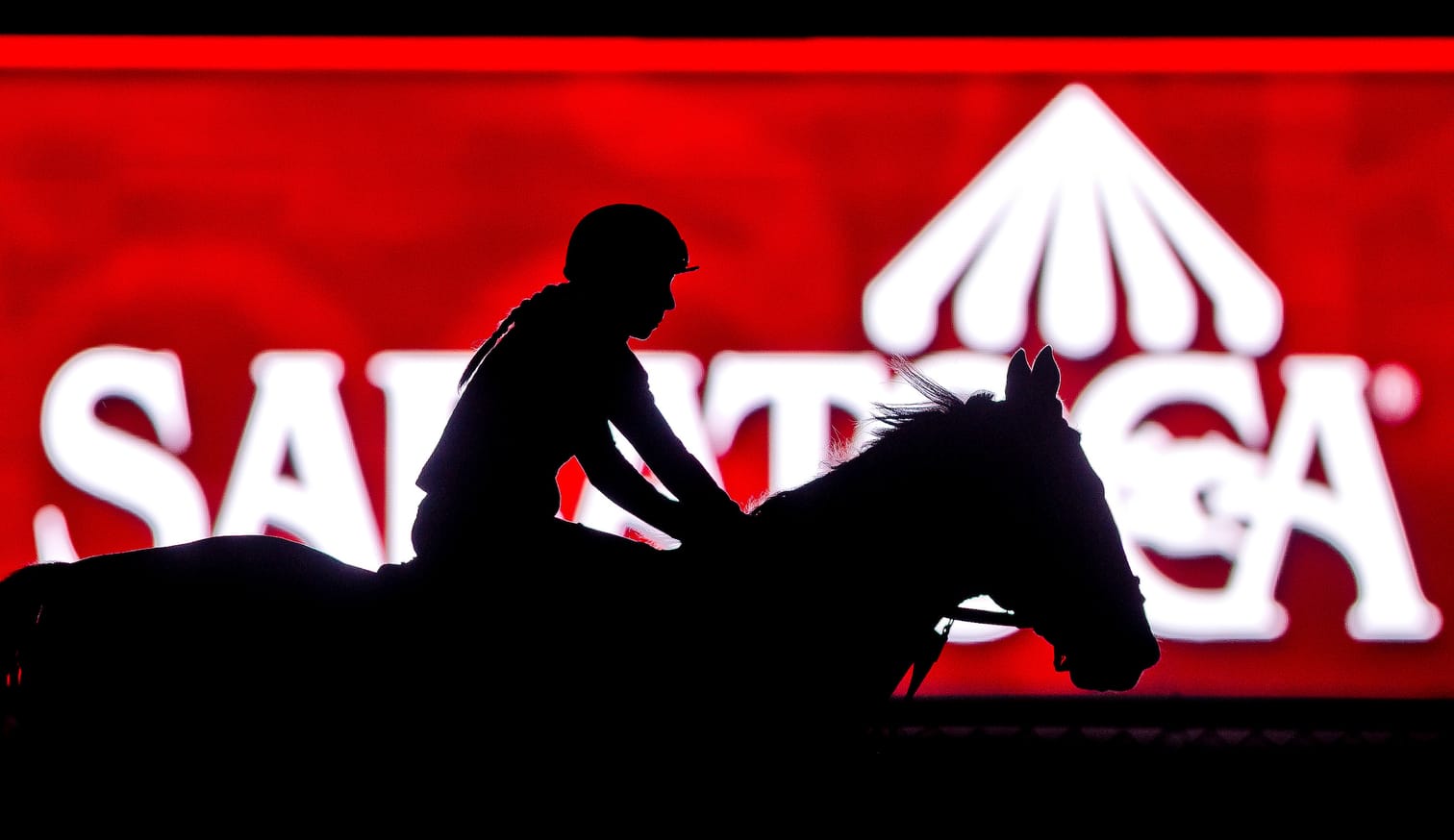 It’s that time of the year. The car’s packed—shirts, shorts, sandals and golf clubs. Travers week. In my book second only to Thanksgiving weekend. My pal and I are headed north on our yearly Spa sojourn for what seems like the 20th time in the last 20 years. Can’t recall, the exact number. Wife tells me it’s only been 17. She’s almost always right. What do I know? Each year my buddy and I scan the names of previous Travers winners playing the ‘remember that one’ game until we cry ‘uncle’ around Unshaded in 2000. Close enough.

Winston Churchill once noted, “There’s something about the outside of a horse that is good for the inside of a man.” He’s right. And, if you mix in a few early morning rounds of golf, good food, several bottles of wine, and a gallon or so of spring water, by the time the weekend’s over, you’ll have completely revitalized individual.

Know what else is good for the inside of a man? Cashing tickets. Unfortunately, on that note, numerous Spa excursions haven’t been all rainbows and potato chips—the latter invented in Saratoga Springs in 1853, allegedly. More than once yours truly has shuffled from beneath red and white awnings toward the parking lot to the sound of Billy Joel’s New York State of Mind with blood on his shoes; absolutely gutted by a weekend’s worth of past-performance misinterpretations. In such cases, it takes until the car reaches 87 South before discussions regarding next season’s Spa trip begin. In other words, not very long at all.

Below is one man’s horse-by-horse analysis of the Gr. 1 Travers field. Hopefully, on the way out of the track Saturday, we’ll agree that in addition to the outside of a horse, ‘there’s something about cashing a Travers ticket that’s also good for the inside of a man.’

Analysis and selections are made before scratches and changes and are for a ‘fast’ track.

This son of Tiznow averted certain disaster when he nearly fell in the Gr. 1 Haskell stretch following interference by Hot Rod Charlie and jockey Flavien Prat. To this colt’s credit, he managed to avoid completely going down, but he did lose jockey Paco Lopez in the severe stumble. Obviously, whatever scrapes he may have incurred in the incident were minor because trainer Steve Asmussen, a cautious sort, has him entered right back here in the Travers. Asmussen’s regular rider Ricardo Santana is up Saturday and it’s interesting to note that the jock has never ridden this guy. Before the Gr. 1 Haskell, where unmolested he probably would have finished third to Mandaloun and Hot Rod Charlie, he was second in the Gr. 1 Preakness Stakes behind Rombaur and sixth in the Gr. 1 Kentucky Derby. Second in the Gr. 2 Louisiana Derby, third in the Gr. 2 Risen Star and winner of the Gr. 3 Lecomte, he’s a ‘there or thereabouts’ sophomore performer who likes to set or force the early pace. Another in-the-money finish seems most likely.

It’s sort of a good news/bad news situation when your horse is 4-5 morning-line odds to win the Grade 1 Travers, a race billed as the Mid-Summer Derby, at a track known as the ‘Graveyard of Champions.’ Winner of the Gr. 2 Jim Dandy last out, the nation’s top-ranked sophomore returns to the Spa after scoring by a mere half-length over #3 Keepmeinmind. He’s now won 7 out of 8 and over $3.5 million. The only blemish on his record came in the Kentucky Derby when fourth, beaten one length, after a wide trip. He’s not flashy, so he doesn’t seem to attract the level of affection he probably deserves. He was voted the 2-Year-Old Champion of last season, so there’s that, but his workmanlike victories haven’t inspired fanaticism among supporters. That said, he wins, and he’ll be a short price to do so again in the Travers. He’s been successful while racing close to the early pace and also in mid-pack, so it doesn’t seem to matter to him or to the Spa’s current leading jockey Luis Saez where they are until turning for home. This inside post position could be a minor concern but it’s a small field so one assumes Saez can work out a trip around foes at some point. Essential Quality attempts to become the first Jim Dandy/Travers parlay winner in 9 years.

We’ve been chasing this one since the Gr. 1 Kentucky Derby, where he finished a closing, well beaten seventh, whipped more than 8 lengths at 49-1. We used him extensively in the Gr. 1 Preakness where he managed a distant fourth at 14-1. Slow breaks were part of the problem in both of those efforts when he was left with way too much to do. Blinkers were re-added and he raced first-time Lasix in the Gr. 3 Ohio Derby to just miss when third, beaten one-half length at 7-2 odds. Last out, with a rider change to Joel Rosario, he finished second to Travers favorite #2 Essential Quality by a mere one-half length. Could it finally be time for this Gr. 2 winner at 2 to win a Gr. 1 at 3? We think he’s got a legit chance at a place known as the ‘Graveyard of Champions.’ The one-mile and one-quarter distance certainly is up his alley and jockey Rosario got to know him last time. Look for a huge effort from this long overdue runner.

In his fourth maiden start this son of Union Rags relished one mile and one-eighth at Aqueduct and romped by more than 5 lengths. Ambitiously next pitched in the Gr. 2 Wood Memorial by trainer Todd Pletcher, this colt was nailed by stablemate Bourbonic on the wire. Dynamic One didn’t fire in the Gr. 1 Kentucky Derby and was rested until the Spa. Last out, on July 30, he proved best in the restricted Curlin Stakes over #5 Miles D. In that victory he earned an outstanding Beyer Speed Figure that fits in here. It’s clear he loves the Spa surface and can handle a distance. Trainer Pletcher is great at developing these types of runners. While he would be a surprise on the ‘win’ end, an in the money finish isn’t out of the question.

With just 3 lifetime starts this son of Curlin is spotting foes significant experience. Miles D broke maiden two back and then rallied for second, nearly 2 lengths behind #4 Dynamic One, in the restricted Curlin. This is a significant step up in class and he’ll need to move forward a bit in the Beyer Speed Figure department. The colt also loses the services of Joel Rosario but has a capable replacement in top SoCal jock Prat. This guy has ability, no doubt, but he may be being rushed a bit in here.

Winner of the Gr. 3 Ohio Derby by one half-length over #7 King Fury and #3 Keepmeinmind, Masqueparade was third behind #2 Essential Quality and #3 Keepmeinmind in the Gr. 2 Jim Dandy. He took 4 races to break maiden and did so via disqualification. Since then he romped by more than 11 in an allowance race at Churchill and took the Gr. 3 Ohio Derby. His last 2 wins came as a result of sweeping moves at one mile and one-eighth. He’s a son of Upstart and was purchased for $180k as a yearling. He was favored last out at around 5/2 but will be a bigger price in this deeper field.

This late-running son of Curlin has faced graded stakes foes in 6 of his last 7 races, so he’s seen some of the best of his generation. His biggest claim to fame is an 18-1 upset of the Gr. 3 Lexington in April. He also was second to #6 Masqueparade in the Gr. 3 Ohio Derby. He’s been outrun by #2 Essential Quality and #3 Keepmeinmind twice each. It should be noted that he finished a head in front of #3 Keepmeinmind in the Gr. 3 Ohio Derby. Horseplayers can toss this guy’s last start in the Saratoga Derby Invitational on grass because trainer McPeek’s horses had been in quarantine and unable to run elsewhere. This colt would appreciate a hot early pace to facilitate his closing charge.

#2 Essential Quality is the best of these on paper and deserves to be favored. However, funny things happen at Saratoga and this could be spot where horseplayers may want to take a shot at beating the public choice. #3 Keepmeinmind has been solid recently and the switch to Rosario should help matters. They just missed beating the favorite last out and at 6-1 this guy’s worth a shot. Other in-the-money chances belong to #1 Midnight Bourbon and #4 Dynamic One.