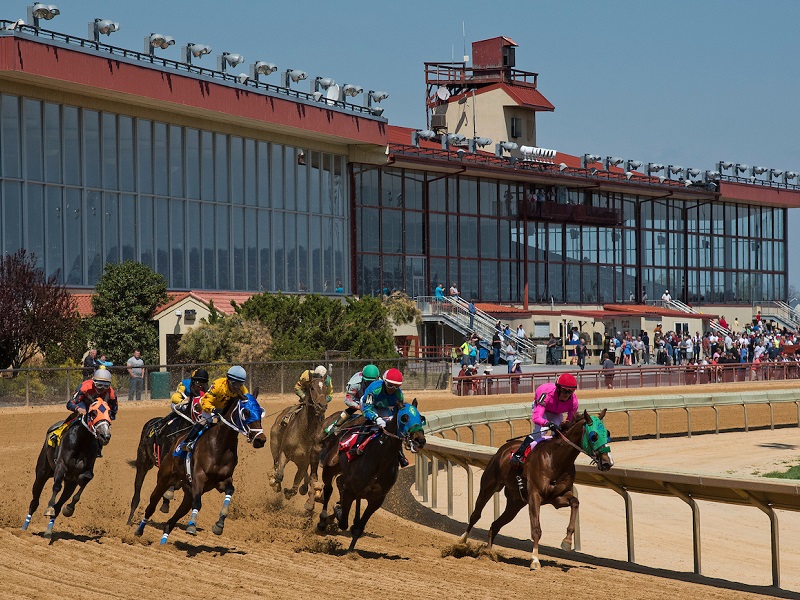 Wayne Potts' burgeoning career as a trainer began at Charles Town in 2004 when he was 24 years old. He returns home with LETMENO in the $150,000 Russell Road Stakes, a race he targeted for the 4-year-colt before he dropped an $80,000 claim slip at Saratoga last month. LETMENO didn't disappoint, surviving a long duel and edging clear late for a repeat victory at this distance. He was hounded every step in his prior start at Ellis Park, but dug in to win in 1:21.3 on a sloppy surface, 2/5 of a second off the track record. VERTICAL THREAT posted a triple-figure Beyer speed figure to cap a 3-year-old season with a runaway victory in the $200,000 Steel Valley Sprint Stakes at Miami Valley in Ohio, earning a Top 10 national ranking among all male sprinters by Horse Racing Nation's Chip Gehrke. He returned off an eight-month layoff in the Grade I Bing Crosby at Del Mar but didn't factor. He travels cross-country again for his first race around two turns on the heels of a blazing 5F workout in :59.

CARAMEL SWIRL shook a duel with the second favorite, 'responded well' when asked at the quarter pole and was geared down late in a 7F allowance victory at Saratoga on a day when every winner was 1-2 at the stretch call. Three rivals she defeated were allowance runners-up and three were MSW winners in their previous start. She draws the rail in this Grade III test around two turns on a Charles Town strip that has favored speed lately. She could be a solo play in the Pick 4, but use longshot FABRICATE as protection. She rallied for third in three tries at 7F around one turn, the most recent against Magic Quest (5/2-2-0, $125k), who came back to finish second in a $100,000 stakes race.

Caixa Eletronica ($2.60 in 2012) is the only favorite to win 'Classic' since it was upgraded to Grade II status nine runnings ago. ART COLLECTOR, a Grade II winner and unbeaten 3-3 at 1-1/8 miles, is the 5-2 morning-line choice this year. He won a restricted stakes at Saratoga in his first start for Hall of Fame trainer Bill Mott, pulling away on the front end while under a hand ride by Luis Saez, the leading jockey at Saratoga in 2021. WARRIOR'S CHARGE is the top pick in here. He has speed, starts from the rail and runs well fresh. He was squeezed at the break in the Grade II Stephen Foster at this distance but recovered with a 4-wide rally to finish second to multiple graded stakes winner and odds-on choice Maxfield (7-9, $1.45 million). NY TRAFFIC is graded stakes-placed at four tracks, covering four distances from one mile to 1-3/16 miles. He has speed, high-percentage connections and is 8-1 on the morning line, the average winning odds of the last nine Classic winners.

Jeff Runco, the all-time leading trainer at Charles Town, has a three-headed monster in the $75,000 Frank Gall Memorial for statebreds. NORTH ATLANTIC is a winning machine and a $647k earner. PENGUIN POWER, the beaten favorite in last year's Gall, won a WV-bred stakes by 14 lengths in his next start to improve to 13-17 at the time. MUAD'DIB is the new kid on the block with a perfect record in six starts, though untested in stakes company. But the seven runners trying to spoil the party for Runco are six-figure earners with a combined 47-144 record, so punch the 'ALL' button in the final leg. FANCY CONCHO got first run on North Atlantic and swept 4-wide to the lead on the final turn, only to get caught late. Both runners benefited from a torrid pace battle that involved HERO'S MAN, who somehow held third as the favorite and looms an upset possibility for a hot barn.