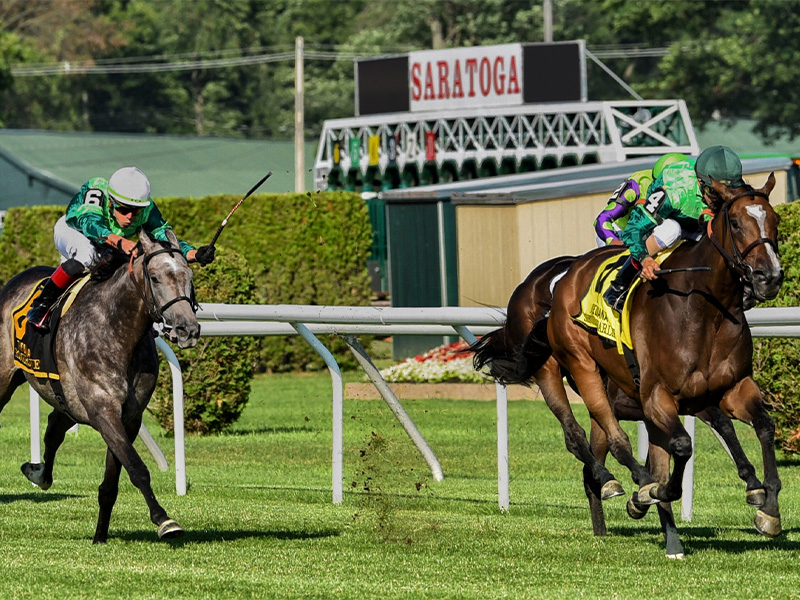 Forecast: Moonachie is listed at 4/5 on the morning line after plummeting in class to the $12,500 level despite showing good recent form in strong state-bred allowance company throughout the year. The Central Banker gelding must have problems, but if he has one good one left, he’ll beat this field. High Heater would seem on paper to be a viable alternative for those not trusting the heavy favorite. A reasonable runner-up last time out, the P. Walder-train colt has his own set of issues, having been a voided claim when second at this level last month. Rolling exotic players may choose to use the two listed above, spread deeper, or better yet pass the race.

Forecast: Charleston Strong shows up in a maiden claimer for the first time and should greatly appreciate the softer competition. Originally a $600,000 yearling purchase, the son of Flatter simply never panned out, but a repeat of his solid third place effort at Belmont Park sprinting on grass two runs back should be good enough to beat this field. Everesting, runner-up over this course and distance at this level earlier this month, has enough early speed to always be within range, has back numbers that make him competitive, and would seem to be the one to fear most.

Forecast: Analyze It was good enough to finish a close third in the Breeders’ Cup Mile-G1 in 2018 but now, at age six, the veteran grass specialist has lost a step or two thanks to various issues that has restricted his career to just 12 lifetime outings. First or second on eight occasions and a multiple graded stakes winner, the C. Brown-trained horse was a solid runner-in a similar allowance race at Belmont Park in early June and makes his first start since following a recent series off steady drills. In a race that should produce soft early splits, he should be on or near the lead throughout. Breaking the Rules, freshened since finishing unplaced in the Pegasus World Cup Turf-G1 in January, likes to settle early and produce a late run and if he can get decent fractions to run at the son of War Front will pose a serious threat in the final furlong. He shows a prior win over the Saratoga turf course, has a work tab that should have him fit enough, and goes for a barn that has strong stats with layoff runners. Both should be included in rolling exotic play; we’ll have a few extra tickets keying Analyze It on top.

Forecast: Bronx Bomber, in the money in each of his last four starts but winless in 2021, clearly is overdue for a win and has recent speed figures that make him the one to beat in this state-bred second-level allowance main track sprint. The Take Charge Indy gelding projects to settle in the second flight and then have dead aim and every chance from the quarter pole home. Too Early is just 2-for-15 in his career with nine seconds and thirds, so he, too isn’t exactly a win machine. However, he’s always liked the Saratoga main track, has the route-to-sprint angle that we like and is reunited with “win rider J. Ortiz. These are the two we’ll be using in our rolling exotics with a slight edge on top to Bronze Bomber.

Forecast: This appears to be a fairly decent maiden sprint for juveniles, with several well-regarded fillies scheduled to make their debuts. We’ll zero in on the two that we believe have trained the best. Distinctlypossible has been impressive enough to warrant inclusion in our Clocker’s “Primed and Ready” list and should come up a hot item at 5-1 on the morning line. The daughter of Curlin is comfortably drawn outside and based on her drills she should be quick enough to secure a good pace stalking trip and then go on with it when ready. Run for the Hills appears to have a ton of early zip and if she breaks cleanly from the rail seems certain to be on or near the lead throughout. The daughter of Runhappy is listed at 8-1 on the morning line but we’ll be surprised if she doesn’t go considerably lower. We’ll use both in our rolling exotics and then have a few extra tickets keying Distinctlypossible on top.

Forecast: Maiden juvenile compete over a distance of ground on grass in a race that should showcase three well-regarded fillies who have been quite impressive in workouts leading up to this race. Gun Boat, a daughter of War Front, has plenty of speed and may find herself on or near the lead throughout if she’s allowed to bowl along. She’s been best of several team drills while working without pressure and seems to be an eager and precocious sort for Shug. She’ll offer good wagering value at or near her morning line of 9/2. Vagaries was scratched out of an off-the-turf race on August 18 after showing plenty of ability in a series of grass drills for C. Brown. The outside draw is of only minor concern for the Irish-bred filly, who has a solid foundation of workouts to have her plenty fit. Pearl Earring has done all of her preparation at Fair Hill and has put together a work tab that looks fairly promising. The M. Stidham barn has solid stats with debut runners, and we suspect this Godolphin homebred has plenty of ability. She looks live at 8-1 on the morning line with J. Rosario taking the call.

Forecast: Here’s a messy starter’s allowance turf sprint that is wide open and extremely challenging. We’ll use four and hope to get by. Air Show is listed at 10-1 on the morning line and may be better than that. The son of Street Sense should enjoy a ground-saving trip from the rail in his first start following a $40,000 B. Bruce claim, switches to J. Rosario, and has speed figures that fit well at this level. He has an effective stalking style and should have every chance to produce a winning late kick. Montauk Daddy crushed a softer restricted claiming field in an off-the-turf dash last week and is wheeled back on short rest by R. Atras following that career top victory. His record on turf is spotty but he has a few races on the lawn that look okay, so if he can shake loose again he could be tough to catch right back. Stanhope, second off the claim for Rudy and remaining protected in a sign of confidence, turns back from a route, retains I. Ortiz, Jr., and should be prominent throughout. At 8-1 on the morning line he’s quite usable. Charlie Five O, a $35,000 M. Maker claim eight days ago, has rising numbers and plenty of early speed. It’ll be interesting to see if he can improve even more in his first try on grass.

Forecast: Undefeated Beau Liam made hard work of it when nosing out a first-level allowance field here last month at even money, but the number came up giant – stakes level for sure – so the son of Liam’s Map will be a heavy favorite once again while moving up a notch on the conditioned allowance class ladder. The S. Asmussen-trained colt is listed at 4/5 on the morning line and based on his speed figures looks every bit of that on pure form. Night Time might be worth including as a backup or a saver. The hard-hitting son of Majesticperfection earned a career top number when missing by a nose in a similar sprint early this month and projects to fold into an ideal stalking position and have his chance to fire his best shot. He’ll need another forward move to worry the favorite but if nothing else looks like a logical exacta partner.

Forecast: Ranger Fox was quite impressive breaking his maiden at Belmont Park last month. He was scratched August 6 but worked two days later and today the son of Nyquist moves up into restricted stakes competition in this inner turf miler for 3-year-olds. The J. Terranova-trained colt most likely will employ a stalking style in his first try around two turns and with numbers that have risen with each outing this promising sophomore looks ready to step forward with a major effort. Straw Into Gold was victimized somewhat by a wide trip and ran a bit better than the line will show when a close fifth in a first-level allowance state bred event over this course and distance last month. The son of Hard Spun seems likely to settle into a second flight position and then produce his best bid when the field straightens for home. He’s only had five starts (with two wins) and should have further improvement in him.

Forecast: The finale is another highly-challenging starter’s allowance affair in which nothing would surprise. Count Down, a $40,000 Rudy claim last month, stretches out, lands the rail, switches to I. Ortiz, Jr., and is certain to employ gate to wire tactics. He’s never won around two turns, though he’s performed well enough routing on a few occasion, so if he can produce a forward move for his new connections the son of More Than Ready might spring a surprise at 8-1 on the morning line. Made My Day and Chulainn, third and fifth, respectively, in a similar affair earlier this month, both ran well enough to be considered dangerous, while Girl Dad switches to L. Saez and may be the most dangerous of the deep threats.