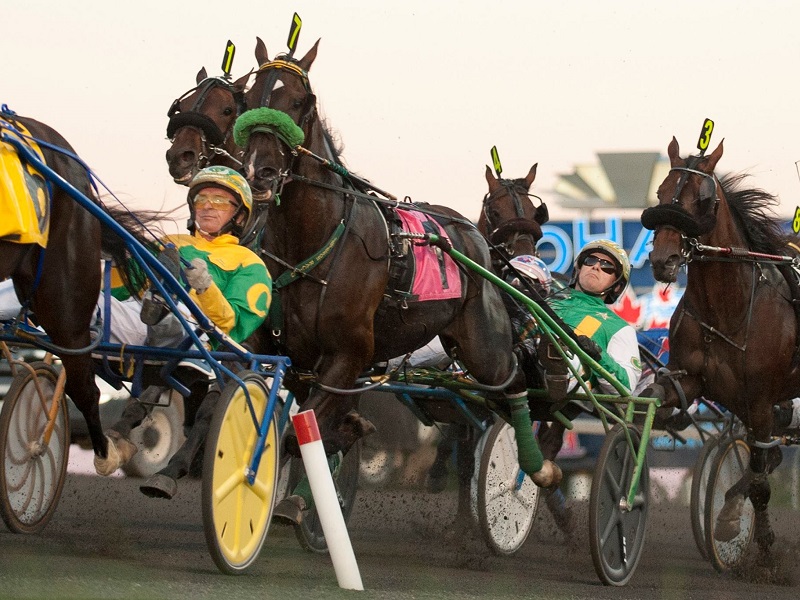 Here is the field for the 38th running of the Pepsi North America Cup. The richest harness race in North America, with a $1,000,000 purse, will take place on Saturday at Woodbine Mohawk Park.

Take advantage of the Xpressbet and 1/ST BET Money-Back Special on this race and get your cash back, up to $10, if the horse you bet to Win finishes 2nd or 3rd.

1 - JIMMY CONNOR B (15/1) - This is one of two entries from trainer Gregg McNair and this gelding will be driven by his son Doug. This 3-year-old out of Big Jim leads the field in starts with 16 and has hit the board 11 times with 4 wins. Comes off a 5th place finish in the Cup Elimination and has the smallest bankroll in the field with lifetime earnings of $88,605. After going winless as a freshman with only three starts, the arrow has pointed up in 2021.

2 - BETTTOR SUN (20/1) - Here is the other McNair trainee and will be handled by one of Mohawk's leading drivers James MacDonald who is fresh off an upset victory with Lindy The Great in last week's Maple Leaf Trot. This son of Sunshine Beach had a solid sophomore season banking over $273,000. Like his stablemate he comes off a 5th place finish in the Elimination race and on Saturday will be looking to notch the 4th win in 12 starts this year.

3 - PERFECT STING (2/1) - This son of Always B Miki was undefeated as a freshman in 10 starts and was named the Dan Patch winner as the 2-year-old male pacer of 2020. As a 3-year-old the Joe Holloway pupil has never missed the board in nine starts. This millionaire has taken four pictures in 2021 banking over $474,000. He has lost by less than one length in over half his starts and hasn't won a race with a large purse this season. This colt endured a hard-fought stretch battle with Whichwaytothebeach to win his Elimination and will be driven by regular pilot David Miller. Holloway will be trying to capture his second NA Cup after winning in 1992 with Safely Kept. Miller is a two-time winner, once with Betting Line in 2016, and then Fear The Dragon in 2017.

4 - BULLDOG HANOVER (9/5) - This is a very talented son of Shadow Play who comes into this race winning four straight for trainer John Darling and driver Jody Jamieson. After scoring in his elimination in a solid 1.49 the connections were able to pick their post position first ahead of Perfect Sting, and the rest of the field took part in an open draw. This winner in 6 of 8 starts this season and 10 of 14 overall, will be trying to give Darling his second Cup win. Jamieson will be shooting for his third NA Cup victory. The conditioner won with Gothic Dream in 1997 and his pilot was in the winner circle with Tell All in 2007 and Up The Credit in 2011.

5 - WHICHWAYTOTHEBEACH (9/2) - Trainer Brett Pelling sends out this son of Somebeachsomewhere, who has been in fine form and will be looking to notch his 8th win in 12 starts this year. Driven by Sylvain Filion the leading driver at Woodbine Mohawk Park, this gelding will be attempting to pad his lifetime earnings of $345,283. Filion will be looking for his first Cup victory while conditioner Pelling won with RocknRoll Hanover in 2005, The Panderosa in 1999 and David's Pass in 1995.

6 - DESPERATE MAN (6/1) - Cathy Cecchin is the conditioner for this son of Shadow Play who comes off a narrow defeat to Bull Dog Hanover in last week's Elimination. This gelding is the only horse she has raced at Mohawk this meet. The runner-up role has happened in the last three starts. This 3-year-old was rolling hard down the lane last week and came up a length short. The winner of $353,014 in lifetime earnings will be driven by usual pilot Trevor Henry and has 4 wins in 14 lifetime starts.

7 - SIMON SAYS HANOVER (20/1) - This is the first of three entries for trainer Tony Alagna and is likely the one with the slimmest chance of taking a picture on Saturday. Did close with a quick last panel to finish 4th for driver Scott Zeron in the Elimination and has banked the second lowest total in career earnings for this field ($145,537). Zeron won the 2019 NA Cup with Captain Crunch and Alagna took top honors in 2013 with Captain Treacherous.

8 - A BUCKABETT HANOVER (12/1) - This Betting Line colt is also an Alagna trainee as his stable will line up in posts 7-8-9. For the most part this colt has been an all or nothing type. He has recorded 5 wins in 11 starts this year but has only hit the board one other time. Did defeat Perfect Sting at Pocono in mid-May by a head but it was the first start of the year for that top colt. In this campaign every win but one has come on smaller ovals. Highly regarded regular pilot Andrew McCarthy will be in the sulky looking for his 1st Cup victory.

9 - ROCKYROAD HANOVER (8/1) - This progeny of the great Captaintreacherous didn't do much as a freshman earning only $5,610 with 1 win in 3 starts. This year has been a far different story banking over $292,000. This Alagna pupil is compromised by the post draw but has hit the board this season in 9 of 13 starts with 4 wins. Tried to go gate to wire last week which isn't his usual style and faded to finish 3rd. Top driver Dexter Dunn may try a different type of trip here as he is looking for his 1st NA Cup win.

10 - SOUTHWIND GENDRY (20/1) - This Ron Burke entry won 10 of 13 last year and has 3 wins in 10 starts in 2021. For this campaign the son of Always B Miki has done its best work on smaller ovals. Finished 4th in the Elimination beaten by almost 10-lengths and that was the third try on Lasix. Burke did win this race in 2014 with JK Endofanera and Yannick Gingras drove Tall Dark Stranger to victory in this race last year. This longshot has lifetime earnings of a hefty $866,641.

11 - HIGHLANDBEACHSBEST (20/1) - Is an Also Eligible entrant and will not race unless another horse scratches.