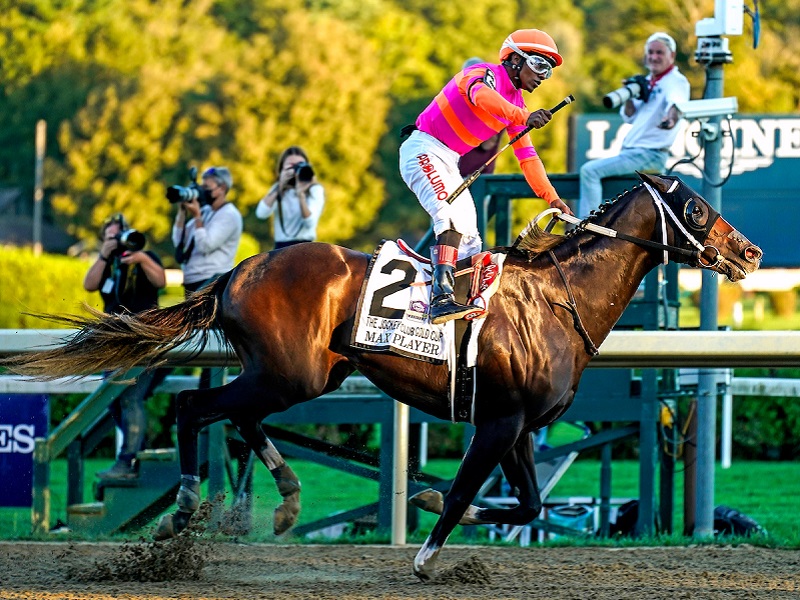 There were several splendid performances on the American racing stage during the Labor Day weekend.

Throwing his hat into the ring as a serious candidate for the Grade I Breeders’ Cup Classic at Del Mar on Nov. 6, Max Player registered an emphatic four-length triumph at odds of 7-2 in last Saturday’s Grade I Jockey Club Gold Cup at Saratoga. Happy Saver came in second at 2-1. Forzo di Oro, sent off as the 11-10 favorite, finished third in the field of six.

Max Player went into the Gold Cup off a victory in Belmont Park’s Grade II Suburban Stakes on July 3, which was contested on a sloppy track. The 4-year-old Kentucky-bred Honor Code colt was credited with a career-best Beyer Speed Figure of 101 in the Suburban. Max Player topped that figure last Saturday. He recorded a 102 in the Gold Cup.

Below are the Beyers for the Jockey Club Gold Cup winners going back to 1990 (the figures prior to this year are listed in the 2021 American Racing Manual, which is now digital only and available for free on The Jockey Club’s website):

*Vino Rosso finished first but was disqualified and placed second.

Not surprisingly, in light of Max Player’s win in the Gold Cup, he moves into the Top 10 this week in the NTRA Top Thoroughbred Poll. The Top 10 is below:

As mentioned earlier, Max Player won the Jockey Club Gold Cup by four lengths. The following day at Saratoga, Asmussen sent out the Gun Runner filly Echo Zulu to take the Grade I Spinaway Stakes for 2-year-old fillies by the same margin.

Asmussen conditioned 2017 Horse of the Year Gun Runner. Not surprisingly, the trainer hoped he would be the trainer of Gun Runner’s first Grade I winner, a goal that was achieved with Echo Zulu in the Spinaway.

In Gun Runner’s four 2017 starts following the Dubai defeat, he reeled off victories in the Grade II Stephen Foster Handicap, Grade I Whitney Stakes, Grade I Woodward Stakes and Grade I BC Classic en route to being elected Horse of the Year.

Gun Runner’s racing career came to an end when he won the Gulfstream Park’s Grade I Pegasus World Cup early in 2018. He ranks No. 84 on my list of the Top 100 Racehorses of the 20th and 21st Centuries to have raced in North America.

Echo Zula, whose final time in the Spinaway was 1:22.51, obviously has the look of a major player for the Grade I BC Juvenile Fillies. According to Asmussen, the plan is for Echo Zulu to make her next start in the Grade I Frizette Stakes at Belmont on Oct. 3.

Ten years ago Asmussen won both the Frizette and BC Juvenile Fillies with My Miss Aurelia.

My Miss Aurelia recorded a 96 Beyer Speed Figure in the Frizette. She managed to win the BC Juvenile Fillies despite quite a dropoff in the Beyer department to an 86.

In Echo Zulu’s only start prior to the seven-furlong Spinaway, she was credited with a 92 Beyer Speed Figure when a 5 1/2-length winner in a Saratoga maiden race at 5 1/2 furlongs on July 15. She received a 90 Beyer for her Spinaway victory as a 3-5 favorite.

Gunite, another 2-year-old Gun Runner offspring trained by Asmussen, won Saratoga’s Grade I Hopeful Stakes by nearly six lengths in an 11-1 upset. Wit, the 3-5 favorite, had to settle for second. Kevin’s Folly ended up third at 28-1. High Oak, the 5-2 second choice in the wagering, finished fourth in the field of 11.

After winning Sunday’s Grade I Spinaway with Echo Zulu, Asmussen took just one day to also become the trainer of the second Grade I winner by Gun Runner in Gunite.

On a wet track listed as good in the Equibase chart, Gunite completed seven furlongs in 1:23.08. He continued his improving Beyer Speed Figure pattern. After a meager 43 Beyer on a sloppy track at first asking April 29 at Churchill Downs, he has recorded figures of 44, 73, 81 and then 83 in the Hopeful.

According to Asmussen, now it’s on to the Grade I Champagne Stakes at Belmont on Oct. 2.

“We know what we want his next two races to be and we feel really good about them,” Asmussen was quoted as saying in NYRA’s post-race Hopeful quotes. “The Champagne and the Breeders’ Cup [Juvenile] are what we’re hoping his next two races are. I love his style for the Juvenile.”

In last Sunday’s seven-furlong Del Mar Debutante, Grace Adler raced sixth early in the field of eight. She rallied to take command turning into the stretch while wide and drew away to win by 11 1/4 lengths at odds of 9-2. Her final time was 1:23.76.

Grace Adler, like Echo Zulu, is now two for two. Unveiled at Del Mar on July 31, Grace Adler came from a couple of lengths off the pace to win a five-furlong maiden race by three-quarters of a length for Hall of Fame trainer Bob Baffert.

When Grace Adler won her first race, she did so despite five furlongs being much shorter than the Kentucky-bred daughter of two-time Horse of the Year Curlin prefers, according to Baffert.

Grace Adler provided Baffert with his record 10th Del Mar Debutante victory. Prior to this year’s renewal, Baffert and fellow Hall of Famer D. Wayne Lukas had each won the Debutante nine times.

After recording a 68 Beyer Speed Figure for her debut victory, Grace Adler improved to a 74 Beyer for her Debutante effort, well below the two figures in the 90s logged by Echo Zulu in her first races.

Next for Grace Adler, according to Baffert, is Santa Anita’s Grade II Chandelier Stakes on Oct. 1. One gets the feeling that Baffert expects Grace Adler to relish the 1 1/16-mile distance of the Chandelier.

Grace Adler, a $700,000 auction purchase, is owned by James Burrows’ Willow Grace Farm and Michael Lund Peterson. The filly is named after a character in the NBC television series “Will & Grace,” which ran from 1998-2006. In addition to directing all of those episodes of “Will & Grace,” Burrows has directed episodes of such popular television programs as “The Mary Tyler Moore Show,” “The Bob Newhart Show,” “Laverne & Shirley,” “Taxi,” “Cheers,” “Night Court,” “Frazier,” “Two and a Half Men” and “The Big Bang Theory.”

When Flightline kicked off his racing career last April 24 at Santa Anita, jaws dropped when he zipped six furlongs in 1:08.75 and won by a little more than 13 lengths. The 3-year-old Kentucky-bred Tapit colt posted an excellent 105 Beyer Speed Figure.

Flightline did not compete again until last Sunday at Del Mar. Once again, jaws dropped.

As Flightline was cruising home to again win an allowance/optional claiming sprint in isolated splendor, this time by 12 3/4 lengths, track announcer Trevor Denman posed a darn good question during his call of the race.

“Is this the next superstar?” Denman said.

A $1 million auction purchase, Flightline flirted with 1:07 and change for his six-furlong win last Sunday, which was accomplished in 1:08.05. He received a 114 Beyer. The 114 Beyer is tied for the highest figure recorded so far this year. Last Saturday, Baby Yoda likewise reached 114 on the Beyer scale when he won an allowance sprint at Saratoga.

The Grade II Santa Anita Sprint Championship on Oct. 2 and the Breeders’ Cup Sprint at Del Mar on Nov. 6 are logical possible races for Flightline in the near future. But it appears that trainer John Sadler is not inclined to be all that aggressive with Flightline just yet with only two starts under his belt.

“He’s a rare, gifted horse,” Sadler said in Monday’s Del Mar stable notes. “He’s so fast, but I think he’ll stretch out to two turns. It’s way too early to make early plans. But the realistic goal is the Malibu Stakes.”

If a Malibu future book existed, I’d have to think Flightline would be about a 3-5 favorite.

This is quite a story.

Unraced at 2, Baby Yoda splashed his way to an eight-length win on a sloppy track this past May 30 at Pimlico while making his career debut in a six-furlong maiden $10,000 claiming race. He received a mediocre 69 Beyer Speed Figure.

Baby Yoda improved to a 79 Beyer in his next start when he finished third in an allowance/optional claiming contest at Pimlico on June 26. Charles Frock trained Baby Yoda for his first two races. Hall of Fame horseman Bill Mott then took over as trainer of the Florida-bred Prospective gelding.

Baby Yoda’s first start for Mott resulted in a 1 1/4-length victory in a Saratoga starter allowance race on July 17.

The 114 figures credited to Baby Yoda and Flightline last weekend are the highest Beyers in the U.S. since Shancelot recorded a 121 at the 2019 Saratoga meet.

Andrew Beyer wrote this for the Daily Racing Form regarding Baby Yoda’s 114: “Members of the six-person team that calculates Beyer Speed Figures look skeptically on numbers that appear to defy logic. Aberrations in final times can be caused by imperceptible changes in track conditions, by errors by an electric timing device or by other factors. If a speed figure makes no sense, we will sometimes change it arbitrarily rather than publish a number we believe incorrect.

“In judging the trustworthiness of a big figure, we examine all of the horses in the field, not just the winner. If many horses show dramatic improvement in their figures, we may suspect that all of the numbers have been inflated because of some aberration.

“Baby Yoda won by 1 1/4 lengths over his stablemate Olympiad, who was making his first start in a year; there was a gap of six lengths between Olympiad and the rest of the field. While we couldn’t assess Olympiad because of the long layoff, all of the other runners in the field had recent form that could be compared with the Saturday race.”

Beyer pointed out that the figures for the 3-4-5-6 finishers in Saturday’s race were comparable with their most recent start, as shown below:

“Nothing in this data suggests that the winner’s figure was inflated,” Beyer wrote. “The Saratoga racing surface appeared to be consistent throughout the day. Baby Yoda’s winning time appeared to be correct. And based on Saturday’s evidence, Baby Yoda may indeed be America’s champion sprinter.”

Even though Baby Yoda showed that he can run a 114 Beyer Speed Figure, my guess at this point is that when all is said and done, he will not end up being voted a 2021 Eclipse Award as champion male sprinter.

A $1.5 million auction buy trained by Baffert, Corniche came out running when he made his debut in a Del Mar maiden race for 2-year-olds at 5 1/2 furlongs last Saturday. Backed down to 1-2 favoritism, the Kentucky-bred Quality Road colt won in front-running fashion by 4 1/4 lengths in 1:03.01.

Corniche recorded a 98 Beyer Speed Figure. It’s the highest Beyer to date by a 2-year-old male or female.

Baffert was represented by both Murray and Pinehurst in Monday’s Grade I Del Mar Futurity. Murray started as the 3-5 favorite in the seven-furlong affair, but he finished a disappointing fifth in the field of six. Pinehurst won at odds of 4-1. Finneus, off at odds of 35-1, ran second. American Xperiment came in third at 5-1.

Pinehurst moved up quickly to get the lead soon after the start and set the early pace. Murray raced just off the lead in the early going before faltering in the final quarter of a mile.

After Pinehurst kicked well clear to boast a three-length advantage at the eighth pole, he came home strongly and ultimately prevailed by 4 1/2 lengths in 1:23.55. Murray finished 10 lengths behind Pinehurst.

Pinehurst has yet to lose in two starts. His 4-1 price Monday was rather surprising in that the 86 Beyer notched by the Kentucky-bred Twirling Candy colt in his Aug. 1 maiden win was the highest figure recorded by anyone going into the Del Mar Futurity. He actually regressed Beyer-wise to a 79 on Monday, yet still was able to get the job done by daylight.

In an extraordinary feat, Baffert now has won the Del Mar Futurity a record 15 times. Those 15 winners are listed below: