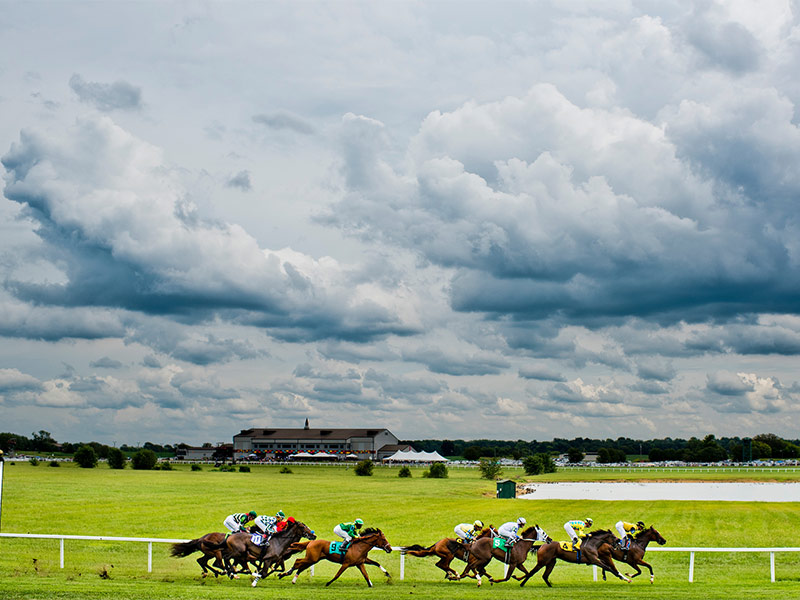 An old handicapping pal and I recently discussed our wagering results, “How’ve you been doing?” he asked.

“Not that well,” I responded. “These Pick 5s are killing me. They’re so difficult to hit but I can’t stop playing them.”

“You have to stop,” he advised. “There are other ways to make money playing without those tough wagers.”

“I know. I know. I just find them alluring. Those big payoffs call to me. I can’t resist.”

“You must stop. You’ll go broke before you hit a big one.”

And I do know. And I advise to do as I say, not as I do. Try skipping the Pick 5s and concentrate on making Win or Exacta Wagers. Even try your hand at a few Doubles or Pick 3s. You’ll probably be surprised at how much you can win with a nice Exacta payoff. I know I was. We avoided Pick 5s and the money drains they are to our bankroll last weekend and came away pretty happy with the results. Maybe you should try the same.

So, why do we present a Kentucky Downs Late Pick 5 ticket below? Because it’s a neat way of handicapping and analyzing the last few races on the card. Hopefully, we’ve offered some meaningful suggestions about which horses might prove best. Use that info to construct useful intra-race wagers; maybe bet an Exacta or two along the way. And, if you really can’t resist, go ahead and play the Pick 5. No one will yell at you.

Whichever way you decide to play, have fun doing it. Sometimes you win, sometimes you lose, but if the game becomes a burden and you need a confidence boost, try picking a winner…a single winner…or a key horse in an Exacta with three other runners. You might be surprised to find out that you have more fun and make more money than when you were chasing Pick 5 payoffs.

Selections below were made before scratches and changes and are for a ‘firm’ turf course.

Saturday’s Kentucky Downs Pick 5 opens with a 9-horse field going one mile on turf and #2 Princess Grace seems to hold all the cards. She’s a 4-year-old multiple Gr. 2 winner, 5 for 6 lifetime and 2 for 2 at the distance. Her game travels, too. She’s won at 5 different tracks, including a dirt win at Churchill Downs in an off-the-turf Gr. 2 test. She’s got a style that will find her just off the early leaders and there seems to be plenty of pace. Jockey Florent Geroux has ridden her once before and won on her. Trainer Stidham already is 1 for 1 at the short meet. She’s a single.

#3 Abscond has a solid chance to finish in the money. She’s been close against better and close at this level. Her knock is that she hasn’t won in a year when she won the Gr. 1 Natalma at Woodbine and is just 1 for 7 at the distance.

#7 Princess Causeway likes Kentucky Downs, 2 wins in 3 tries. That’s important because this course is unique. The issues with the 5-year-old are that her last 3 wins all came in allowance races and she’s 0 for 5 at the distance.

Use as many as you can afford but must have #3 Bombard.

For a six-furlong turf graded stakes sprint there’s very little early speed signed on. #3 Bombard, shipping here from California, seems to be the fastest early. He just missed in this race last year over a ‘soft’ turf course. He may appreciate a firm surface for his best. He appears to have been pointed toward this race by Hall of Fame trainer Richard Mandella and the 8-year-old gelding will be ridden by regular rider and Golden State top jock Flavien Prat. He’s 10-1 on the morning line and anything near that price is worth a Win wager. If you’re in a gambling mood, single this 10-1 shot on a Pick 5. If he wins, he’ll add plenty of strength to your ticket. If not, oh well, you’ve lost before on worse singles.

If you’re not in a gambling mood, then feel free to use as many in here as your budget can handle. A decent case can be made for several of these beginning with the 6-year-old mare #9 Got Stormy. She upset a Grade 1 field of males at Saratoga last out going one mile and she’s now 20 of 30 in the money and 1 for 1 at Kentucky Downs—last season’s Gr. 3 Ladies Sprint. She added a bullet, best-of-51 half mile since the Spa race.

#7 Casa Creed is the lukewarm 7-2 morning line choice off a third-place effort to #9 Got Stormy at the Spa going one mile. Before that he upset the six-furlong, Gr. 1 Jaipur field at Belmont and previously won the seven-furlong Elusive Quality. The 5-year-old seems on his game and his best fits.

#2 Fast Boat comes in off nice score in the Gr. 3 Troy at the Spa. He’s 1 for 1 here and probably is best going a half-furlong shorter where a hot pace aids his closing kick. He doesn’t figure to get a hot pace Saturday.

#4 Gear Jockey just finished third behind #2 Fast Boat at the Spa. He likes a hot early pace to set up his closing kick and he may not get that in here. However, he’s sharp and has youth on his side as a 4-year-old colt against some more experienced foes.

#5 Born Great enters off a solid stakes score at Ellis Park. These are tougher, but he’s 2 for 2 at Kentucky Downs—back-to-back races he won within 7 days last year.

#10 Chewing Gum hasn’t won a race since June of ’20, but he was second to #7 Casa Creed one back, is also trained by Bill Mott and is 1 for 1 at Kentucky Downs.

#11 Stubbins has been working well for trainer Doug O’Neill at Del Mar. This 5-year-old horse has gaps in his past performance lines and hasn’t won since Oct. of ’19. Still, on his best day, he’s another that fits.

Big decision in here surrounds #5 Arklow. His best is good enough to get the job done but, at age 7, does he still have his fastball? Trainer Brad Cox, best in the nation last year and pretty hot this season, brings this guy back quickly off an August 21 effort at Del Mar. We like the move. Arklow loves this course, 2 wins and a second in 3 starts and he’s 8 for 13 in the money at the distance. Pace should be lively enough up front, too. Let’s go, old fellow!

Trainer Mike Maker has 5 starters in this race. He’s got to win with one of them, right? Maybe. Trouble is we can’t tell which one that might be. #9 Glynn County feels like an improving 4-year-old with a win over the course and at the distance. He’s 15-1 and should get a decent trip behind the early speed, maybe getting first run on the leaders.

#1 Into the Sunrise has speed and the rail for trainer Wesley Ward. He’s got a pair of bullet works for this race, both at Keeneland at five furlongs. That should have him prepped for his best at this six and one-half furlong distance.

There are a few ways to go in this finale. Spread the net a bit in here with #9 Garmento from the Brad Cox outfit. Jockey Joel Rosario, who’s been red hot at this meeting is aboard and is strong with this barn. This Empire Maker first timer has been working regularly for his debut.

#10 Seal Beach hails from the Mike Maker barn and has Irad Ortiz up and they are a solid combo. This Midshipman colt has been third and second in two starts at Saratoga.

#2 Baj showed good speed first out going one mile and one-sixteenth at Saratoga first time out. This cut back in distance ought to help the cause. Tyler Gaffalione rides for Saffie Joseph and they are a strong combo. This son of Can the Man who was an affordable $6,200 purchase may surprise this more expensive bunch.

#6 Grael ran well at Ellis Park first out in a one mile turf encounter. That effort in mid-August ought to have him fit for this. Blinkers go ‘on’ in here and trainer Brendan Walsh is 19% with second time starters.