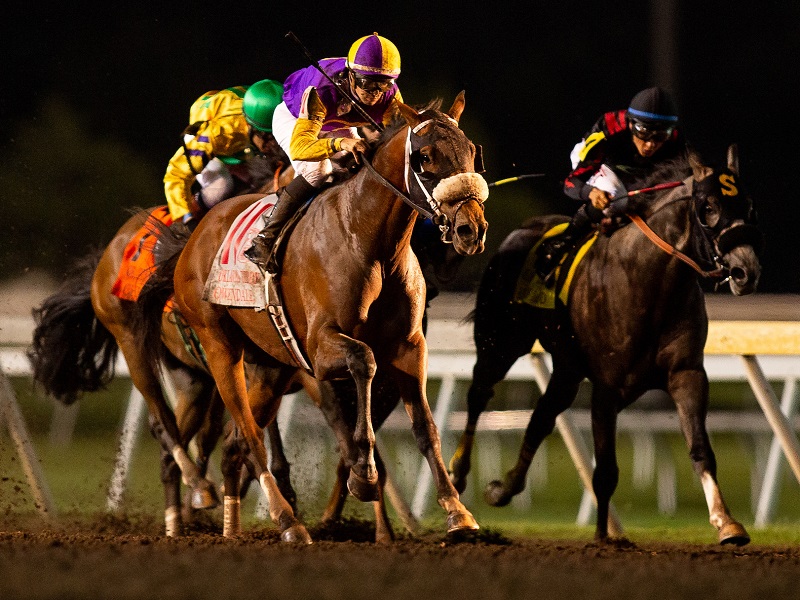 Remington Park’s top Thoroughbred card of the year is upon us: Sunday is Oklahoma Derby Day.

There’s a 12-race card (4:04 p.m. ET start), with two Grade 3 races in the spotlight – the Derby and the Remington Park Oaks. The $400,000 Derby goes as the 11th race and is the third leg of the Late Pick 4. The Oaks, as the eighth, is not part of this sequence but is part of a mid-card Pick 4. There’s plenty of representation from some of the nation’s top stables, and here’s a look at the runners I’m using on a suggested $64 ticket:

#3 CURLIN’S JOURNEY (9/5) has kept some good turf company lately, mostly in Texas. Trainer Dallas Keen’s 6-year-old Curlin mare has shown improvement in two of her last three, and jockey Luis Quinonez, who is aboard today, rode her to those victories. She has adopted a come-from-behind style, thanks to her late-riding jockey, and can take dead aim at these.

#3 NITROUS (4/1) gets an ideal pace setup, and the Steve Asmussen campaigner has what it takes to close on some of America’s quickest sprinters. He finished second to local hero Welder last time, but it was his first start in seven months, and he can be expected to improve on that effort. He gets a rider change to Ricardo Santana, Jr., who is comparable to anyone riding in the country today. NITROUS last won when he took the Thanksgiving Stakes at Fair Grounds, and just prior to that was third in a three-photo in the DeFrancis Memorial Dash at Pimlico. #5 WELDER (7/2), who is returning in this one and seeks his 17th Remington win, owns the six-furlong track record of 1:08.13, and that two-year-old mark could be in some serious jeopardy.

#5 TEAM MERCHANTS (6/1) marks a rare occasion when trainer Doug O’Neill brings a horse from the West Coast, and this one has kept some company that probably toughened him up for this one. He comes in off a fifth behind Kentucky Derby winner Medina Spirit, top soph Rock Your World and up-and-comer Stiletto Boy in the Shared Belief Stakes at Del Mar. Stiletto Boy beat #2 FLASH OF MISCHIEF (8/1) (second) and #1 SUPER STOCK (7/2) (fourth) – a pair of runners in this race – in the Iowa Derby, which emphasizes the kind of company TEAM MERCHANTS has kept, even beyond the more-recognizable top two in that race. TEAM MERCHANTS, a homebred son of Kentucky Derby winner Nyquist (same owner Reddam Racing, O’Neill, Gutierrez) has not been a model of consistency, but his best races were eye catching, including his maiden win at Saratoga last year and a win in an optional claiming race two back at Del Mar. Mario Gutierrez is booked for the ride.

#5 TUT’S REVENGE (9/2) gets the slight edge in an evenly raced turf race here. The Clinton Stuart trainee comes in off a sixth in a stakes race at Kentucky Downs and prior to that was second in two at Ellis Park. He’s won three of four over the Remington course and usually is a pace factor.