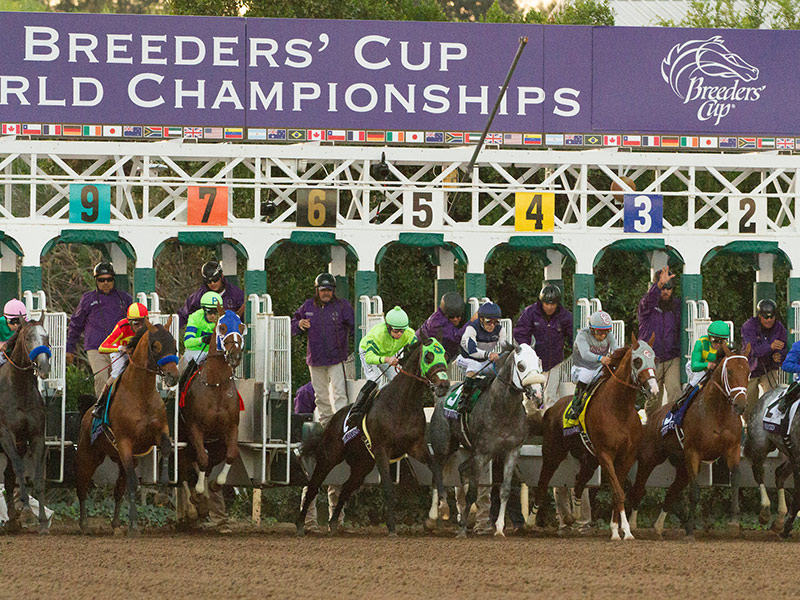 The 2021 Breeders’ Cup at Del Mar on Nov. 5-6 is just around the corner. As Del Mar’s morning-line oddsmaker, I thought this would be a good time to come up with a list of early odds for the $6 million BC Classic.

Of course, the actual field for the Grade I BC Classic is far from set in stone. Who will start in the 1 1/4-mile contest is a guessing game at this point. These early odds no doubt will be different closer to the Breeders’ Cup as a consequence of a number of factors, such as who actually ends up being entered and how well (or not) each horse seems to be training up to the race.

With all that in mind, my early odds for a dozen BC Classic candidates are listed below:

I expect Knicks Go and Essential Quality to receive the most support from bettors. Brad Cox trains both.

Knicks Go will be taking a three-race winning streak into the BC Classic. Last Saturday at Churchill Downs, he cruised to a four-length victory in the Grade III Lukas Classic.

With jockey Joel Rosario peeking back so many times in deep stretch that he looked something like a bobblehead, Knicks Go completed his 1 1/8-mile journey in 1:47.85. This clocking was not far off the track record of 1:47.28 set by Victory Gallop in 1999. In terms of fifths, Knicks Go was just two-fifths off Victory Gallop’s clocking.

Knicks Go was assigned a 104 Beyer Speed Figure for his Lukas Classic triumph. The Maryland-bred Paynter colt does own the highest Beyer recorded in a two-turn race this year, a 113 that was achieved when he won the Grade III Cornhuster Handicap by 10 1/4 lengths at Prairie Meadows on July 2. Knicks Go also posted a 111 Beyer when a 4 1/2-length winner of Saratoga’s grade I Whitney Stakes on Aug. 7.

It is noteworthy that when trained by Cox, Knicks Go now is seven for seven in races around two turns.

Will Medina Spirit and/or Art Collector push Knicks Go early in the BC Classic? Could that be a recipe for Knicks Go to lose his first two-turn race for Cox? Or will Knicks Go prove to be just too fast early? Can Knicks Go seize control of the race early and, despite setting what likely will be a brisk pace, do it comfortably enough that he has plenty left in the tank for the stretch run?

Brad Free, like yours truly, has Knicks Go listed as a 5-2 favorite in Daily Racing Form’s BC Classic odds.

One of the main reasons I have Essential Quality at 3-1 instead of 7-2 is he has been the favorite in all nine career starts to date. In other words, he has been strongly backed by bettors every single time he has raced.

Then there is Essential Quality’s stellar resume in that he has won eight of nine lifetime starts. Also, it appears that this is a fine group of 3-year-old males. An indication of this was how Medina Spirit trounced older foes in the Awesome Again.

I look for Hot Rod Charlie to get quite a bit of respect as far as BC Classic wagering is concerned. Hence, I have him at 5-1.

Hot Rod Charlie ran a splendid race in defeat in the Grade I Belmont Stakes on June 5. Hot Rod Charlie’s performance was so impressive on that occasion because, despite running the fastest opening quarter-mile in the history of the Belmont when run at 1 1/2 miles, he managed to finish second to Essential Quality.

The Doge paid the price for his early efforts. He faltered and finished seventh in the field of eight. Pavot won by five lengths, while The Doge lost by a little more than 24 lengths.

The Belmont has been run at 1 1/2 miles a total of 95 times. Hot Rod Charlie ran the opening half-mile in :46.49 or :46 2/5 in fifths. The only horse to ever record a faster time for the first half-mile was the great Secretariat, who was clocked in :46 1/5 en route to his spectacular 31-length victory to complete a Triple Crown sweep.

After the Belmont, Hot Rod Charlie finished first in Monmouth Park’s Grade I Haskell Stakes on July 17 for trainer Doug O’Neill. However, the Kentucky-bred Oxbow colt was disqualified and placed last for causing Midnight Bourbon to clip heels and unseat jockey Paco Lopez during the stretch run.

When last seen under silks, Hot Rod Charlie won the Grade I Pennsylvania Derby by 2 1/4 lengths on Sept. 25. He received a robust 111 Beyer Speed Figure for that effort.

Below are the Beyers of 105 or higher by a 3-year-old this year at one mile or longer:

I have Medina Spirit at 6-1 for the BC Classic following his Awesome Again victory in which he was hammered down to 13-10 favoritism despite facing older foes for the first time. The 3-year-old Florida-bred Protonico colt now has finished first or second in eight of nine career starts.

Back on the first Saturday in May, Medina Spirit crossed the finish line first in this year’s Grade I Kentucky Derby. Mandaloun was the runner-up. Hot Rod Charlie edged 5-2 favorite Essential Quality (who experienced a very wide trip) by a head for third.

Art Collector is three for three since Hall of Famer Bill Mott took over the training duties. For Mott, the 4-year-old Bernardini colt has won Saratoga’s Alydar Stakes on Aug. 6, the Grade II Charles Town Classic on Aug. 27, then last Saturday’s Woodward.

It is to Art Collector’s credit that he has shown that he can win even if he does not get the early lead. At Charles Town, he raced in second early, a length off the pace, before getting the job done. He also won Keeneland’s Grade II Blue Grass Stakes last year after stalking in third early.

A major reason why I do not have Max Player’s BC Classic odds lower than 10-1 is the fact that his top Beyer Speed Figure is not higher than 102. Free has Max Player at 9-2.

I think the DRF’s Jay Privman makes an astute observation in his comment for Max Player when stating that he “earned career-best Beyer in last, will need better still vs. these.”

As for the dozen BC Classic candidates that I listed earlier, this is their top Beyer Speed Figure to date:

Below are the Beyers for BC Classic winners going back to its first running in 1984:

I could not help chuckling when I was notified of a workout in Oregon on Sept. 29 via Daily Racing Form’s stable mail. The email stated that Mucho Gusto had worked four furlongs that day in :50.60 at Grants Pass Downs.

It was announced last January that Mucho Gusto had been retired from racing due to a soft-tissue injury. In what turned out to be his final start, the 5-year-old Kentucky-bred son of 2013 BC Classic winner Mucho Macho Man finished fourth in Santa Anita’s Grade II San Antonio Stakes late last year on Dec. 26.

Mucho Macho Man won six of 13 career starts while earning $3,943,800. His biggest victory came in the Grade I, $3 million Pegasus World Cup at Gulfstream Park in 2020.

Did Mucho Gusto really have a workout last Friday at Grants Pass Downs? Of course not. It turns out that it was Mucho Runner who worked four furlongs in :50.60 at Grants Pass on Sept. 29.

Mucho Gusto’s highest Beyer Speed Figure was the 107 he was credited with when he won the Pegasus. Mucho Runner’s top Beyer so far is the 49 in her lone victory.

This brought back memories of my very first day on the job in the summer of 1974 after being hired by the Daily Racing Form. The man responsible for the DRF hiring me was Bud Lyon, who was the national supervisor of the DRF’s chart-callers. Lyon called a great many Kentucky Derby charts for the DRF. He was calling charts at Playfair that summer until Dick Cartney would take over calling the charts at Playfair following the close of Longacres in September.

After I was hired, Lyon instructed me to report to the racing office the next morning to learn the ropes of what the DRF needed from a track on entry days. Lyon’s call-taker was longtime DRF employee Wilbur Brooke.

When I happened to see the name of one of the horses on the handwritten list of workouts, I thought I should bring it to Brooke’s attention.

“If I were you, Wilbur, I would not send in that workout,” I said, pointing to the name of one of the horses.

Since this was my first morning on the job, I did not want to make a big deal of it. I tried to be as low-key as possible. Even so, Brooke did not take kindly to my suggestion.

Brooke went back to typing away. But after a few minutes, he stopped typing.

“Just out of curiosity, why did you tell me to not send in that workout?” Brooke asked.

“Well, anything is possible,” I said. “So, I can’t be 100% sure. But I am 99.9% sure that Little Current, winner of this year’s Preakness and Belmont Stakes, did not work four furlongs this morning at Playfair.”

“What? That’s the name of the Preakness and Belmont winner? Well, in that case I guess that I won’t send it in,” Brooke said.

When I showed up in the racing office the next morning, Brooke thanked me and explained what had happened.

“When the clocker asked the trainer for the name of the horse that had just worked a half-mile, the trainer said it had been Little Current,” Brooke said. “The trainer just wanted to see that if he did that, would Little Current’s name show up on the work tab in the Racing Form. And it almost did. Thanks again for catching that.”

I thought that, all in all, this was a pretty good way for my DRF career to begin.

In the wake of Medina Spirit’s Awesome Again victory, he moves into the Top 10 in this week’s NTRA Top Thoroughbred Poll. Art Collector also enters this week’s Top 10 following his win in the Woodward. Maxfield and Malathaat dropped out of the Top 10 this week.

The Top 10 is listed below: