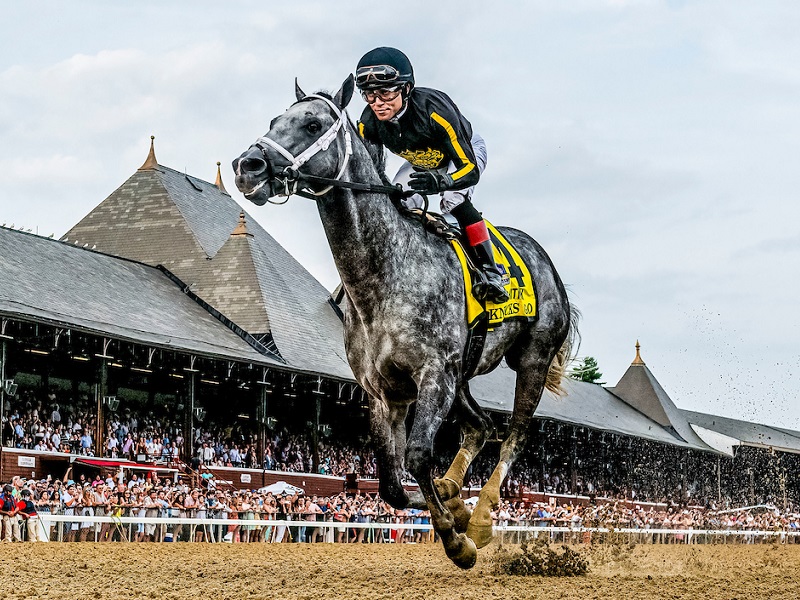 Nice-price danger: TIME TO PARTY (15-1) // Interesting at a nice price, especially with Prat aboard

I also gave some consideration to making either Life Is Good in the Dirt Mile or Jackie’s Warrior in the Sprint my “most probable winner.” But I ultimately decided Gamine is the right way to go.

I know there are those who think Gamine could be vulnerable this Saturday. Some believe that she is not as good this year as she was last year. But even if that’s true, I would not go so far as to say that the 2021 Gamine is significantly slower than the 2020 Gamine. Keep in mind no one has been able to beat Gamine in 2021. Her closest call so far this year, such as it was, came when she won the Grade I Derby City Distaff at Churchill Downs on May 1 by “only” 1 1/2 lengths. Two of her four victories this year have been by margins of five and 10 lengths.

This year’s Filly & Mare Sprint field was reduced to five with the defection of Estilo Tarentoso. Daily Racing Form’s David Grening reported Tuesday that Estilo Talentoso would not run Saturday “due to an issue with her right fore, according to trainer Juan Arriagada.”

As for Gamine’s remaining four opponents Saturday, she already has defeated two of them.

Ce Ce is a multiple Grade I winner. Gamine outran Ce Ce by three lengths in the Grade I Ballerina Stakes this year at Saratoga.

Edgeway is a very nice filly. She’s won this year’s Carousel Stakes at Oaklawn Park and Grade III Rancho Bernardo Stakes at Del Mar. But in between the Carousel and Rancho Bernardo, Edgeway finished 11 1/4 lengths behind Gamine in the Grade II Great Lady M. Stakes at Los Alamitos.

Sure, Bella Sofia is a talented 3-year-old filly who looks capable of possibly giving Gamine a serious run for her money. Bella Sophia looked terrific when winning the Grade I Test Stakes by 4 1/4 lengths at Saratoga. She then cruised to a 3 1/2-length win against her elders in the Grade II Gallant Bloom Stakes at Belmont on Sept. 26.

But while I think Bella Sofia should be taken very seriously Saturday, I still find it hard to envision her defeating Gamine.

By making Gamine my “most probable winner,” I can’t help but have one little concern due to how poorly favorites fared at the 2017 Breeders’ Cup held at Del Mar. Not a single favorite won any of the seven Breeders’ Cup dirt races in 2017. Only two favorites won the 14 Breeders’ Cup events in 2017. Those two winners were Mendelssohn at 9-2 in the Juvenile Turf and World Approval 5-2 in the Mile.

One of the shortest-priced favorites that lost at the 2017 Breeders’ Cup came in the Filly & Mare Sprint. Unique Bella finished seventh at odds of 11-10.

Below is a list of my most probable Breeders’ Cup winner for each year going back to 2004:

Nice-price danger: FAST BOAT (12-1) // Surges late to get into superfecta?

Nice-price danger: AS TIME GOES BY (15-1) // Last more like it for regally-bred miss