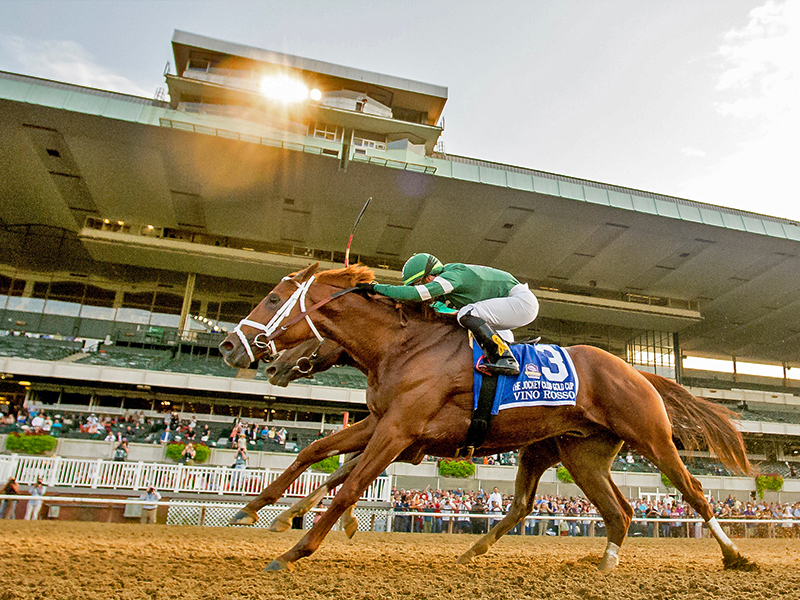 Hard not to notice anyone or anything named Rockefeller in New York, and the four-legged Rockefeller is the favorite for Belmont Park’s Grade 3 Nashua Stakes on Sunday.Rockefeller will be the center of the grid for the mile event, and he comes in off a fourth-place finish behind Corniche in the Grade 1 American Pharoah at Santa Anita.The Medaglia d’Oro colt (a $750,000 yearling buy) won his other start in easy fashion at Del Mar. It looks like a good move to keep Rockefeller away from some of his uber-talented stablemates, and this option looks like a good one. The Nashua drew only six horses, and Rockefeller is the reason. And for that, he’s a single in the suggested Late Pick 4 ticket. That opens it up for the other races, which look like they necessitate multiple inclusions. We’re going with a $70 suggested Late Pick 4 ticket, and here’s a look at the combatants:7th Race (2:43 p.m. ET, claiming)HEAVY ROLLER beat bottom claimers two back and has shown signs of staying in good form. He was an even third vs. similar as this last out and is a solid campaigner, especially at this distance of one mile.There are plenty of legit options in this claiming event.Also on the ticket: DARK STORM, DADDY KNOWS, HAMMERIN AAMER.8th Race (3:14 p.m. ET, allowance optional claiming)BUY LAND AND SEE drops out of the G3 Belmont Turf Sprint and prior to that was fourth in the G2 Hill Prince. He’s had other good appearances at Belmont, including a win in the Awad Stakes last year. He should be able to show significant improvement as he steps down to allowance optional claiming.They’ll travel in a pack, and this is too tough to pin hope on a single. In fact, if you do five deep, you’ll have a decent shot to advance.Also on the ticket: DURESS, GUILDSMAN, ARTEMUS CITYLIMITS, TURN OF EVENTS.9th Race (3:43 p.m. ET, Nashua S.-G3)ROCKEFELLER (see above).Also on the ticket: None (single)10th Race (4:13 p.m. ET, maiden)PARATUS gets a slight edge in what looks like the most difficult of the four races.He comes in off a closing fourth, losing a maiden race by just a half-length. That was the first start for the More Than Ready colt, and he doesn’t have to improve a lot for this. However, there are several in here that have shown some talent in previous starts, and some first-timers will get their share of support. In all, the suggested ticket has seven runners on the ticket from this race.Also on the ticket: MISBEHAVED, CITY AT NIGHT, STREET VENDOR, RIDLEY’S MAJOR, NYQUEST NIX, RUTHENIAN.My Ticket