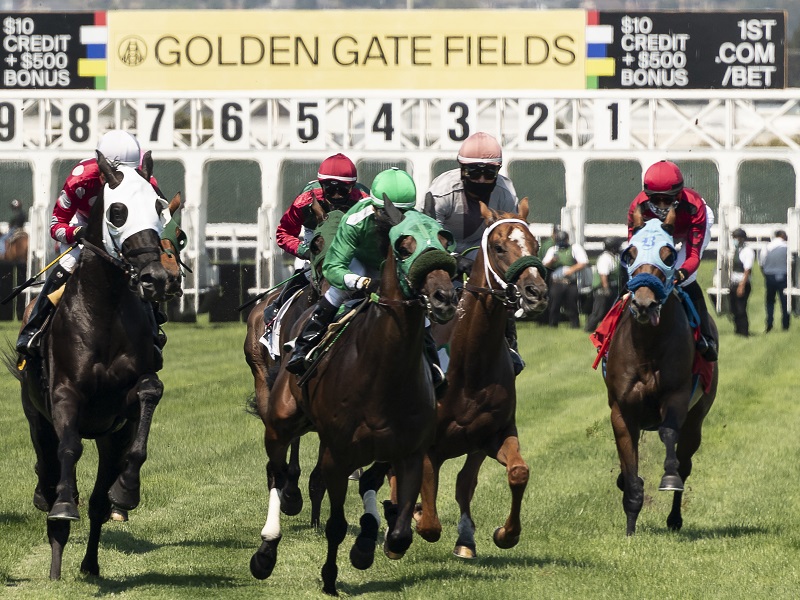 $50,000 OAKLAND STAKES AT GOLDEN GATE FIELDSSaturday, November 20, 2021The Lead:We venture to Northern California for this week's action and the 6-furlong Oakland Stakes for elder sprinters on the Tapeta surface. Golden Gate Fields' Saturday feature lured a field of 7 that includes 5 locals and a pair of shippers based at Santa Anita. The Oakland will go as Race 7 on a 9-race card.​Field Depth:PAPA'S GOLDEN BOY is the lone stakes winner in the field, while BORDER TOWN is Grade 3-placed and the likes of IN OUR A and ULTIMATE BANGO are stakes-placed. Three others are out to prove their class worth. BORDER TOWN has kept the classiest running lines in the field, mostly in turf routes.Pace:For a 6-furlong sprint, there's little determined early speed. Couple that with a modest field size of 7, and this race likely will be taken by a horse on the front end. With few quality and quantity challenges, it sets up for early speed. IN OUR A from the rail and PAPA'S GOLDEN BOY appear to have the most early interest, while I'MGONNABESOMEBODY could be forwardly placed. PAPA'S GOLDEN BOY should be fastest early.Our Eyes:SoCal shippers ULTIMATE BANGO (Mark Glatt) and BORDER TOWN (Richard Mandella) will garner much attention from the national simulcast audience. ULTIMATE BANGO exits a late-running third at Del Mar in a turf sprint allowance behind the win machine Mike's Tiznow, a quality effort despite a troubled trip. It's his second start off a layoff and should improve, but he's not won a race in more than 2 years and that included a flat third of five over this surface in his only local try in last fall's El Dorado Shooter Stakes. BORDER TOWN cuts back to 6 furlongs for the first time in his 18th career race. Sire War Front gives him some brilliance up top, but he's bred all route on the damside and his rallying route past performances are questionable at this trip...particularly with a lack of early pace to set the table.PAPA'S GOLDEN BOY wired the Budweiser and Governor's Stakes this summer at Emerald Downs on dirt while sprinting and represented himself well enough in the Grade 3 Longacres Mile when fourth on the stretch-out. His Nov. 7 try at Del Mar was compromised by a trouble start when last of four in a turf sprint allowance behind graded stakes winner Beer Can Man, who would be odds-on vs. this group. PAPA'S GOLDEN BOY has never run on the GGF main track, but has been here since September and a bullet workout Oct. 30 for this indicates he can get over it well enough.IN OUR A is the other early pace threat to fear. He's never missed an exacta in 10 starts with 5 wins and 5 runner-up finishes. All of those have come sprinting on the Tapeta; this is what he's cut out to do. Jockey Pedro Terrero is riding lights out and expect him to put this one right into the mix from the rail draw. This will be a class test for the former claimer and Cal-bred stakes performer, but the makeup of the field doesn't overwhelm him on credentials.Others include the former SoCal claims RAGER and ITALIANO in a 2-3 rematch from their recent $40,000 claiming showdown, as well as ex maiden claimer I'MGONNABESOMEBODY off back-to-back route victories in starter allowance an allowance company.Most Certain Exotics Contender:IN OUR A is within his element and has not missed an exacta in 10 tries. The pace seems manageable as well.​​Best Longshot Exotics Contender:No big prices are expected, but I'MGONNABESOMEONE could sit a nice trip outside within reach of the front and have some staying power while turning back from route to sprint. That's a good recipe to keep punching for a share.​Sending it in ($100 bankroll):Lean to the early speed horses, which may still offer value if we knock off both SoCal shippers. $50 exacta box PAPA'S GOLDEN BOY and IN OUR A ($100).