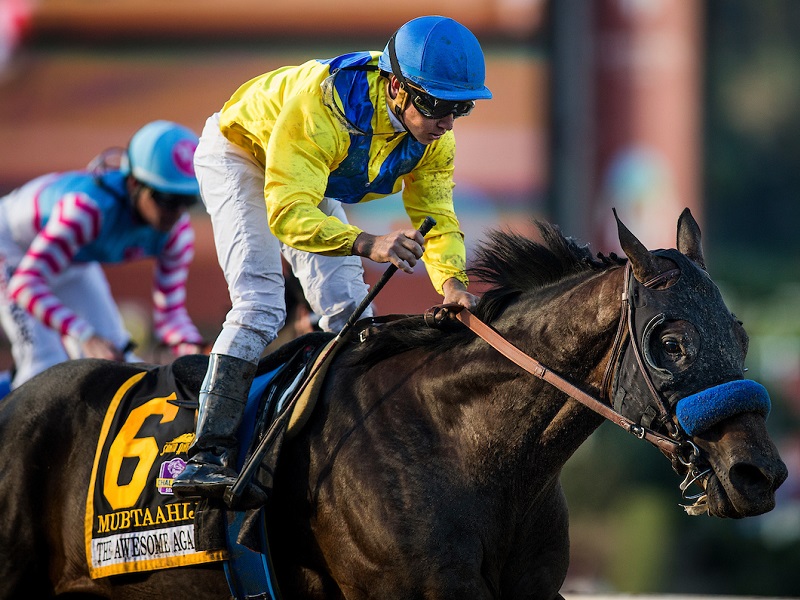 That old saying about how mice frolic when felines are on holiday would be a partially accurate description of what occurred (or didn’t occur) this past weekend in coast-to-coast graded stakes races. It’s also a coming attraction of what will happen this weekend, too, in major races nationwide. You see, this season, much more so than in the past, connections with top-ranked Breeders’ Cup prospects have chosen to skip starts in assorted major stakes races and instead train horses up to million-dollar events November 3 & 4 at Del Mar.

The good news is that while runners like Arrogate, Gun Runner, Collected, Stellar Wind, Forever Unbridled and a host of others stay home, others can raid the kitchen and feast on expensive Grade 1 cheese.

Below is one man’s opinion of what happened in major races at Santa Anita and Belmont and how results affect early Breeders’ Cup race analysis.

ZENYATTA -- Paradise Woods, impressive winner of the 2017 Santa Anita Oaks and failed favorite in the Kentucky Oaks, caught a less than threatening trio of challengers in the Grade 1, $300,000 Zenyatta at Santa Anita. With SoCal resident Stellar Wind absent from the lineup and awaiting the Breeders’ Cup Distaff and co-sophs Abel Tasman and It Tiz Well fresh off a one-two finish in Parx’s Cotillion, ‘Woods had things pretty much her own way Saturday as she dominated the early pace and drew clear to win easily. Last out at Del Mar in the Torrey Pines Stakes -- her first appearance since a torrid early pace and sloppy surface stymied her in Louisville -- she stumbled at the start and then failed to fire. To see her return to top form in the Zenyatta had to be comforting to Hall of Fame trainer Dick Mandella. However, in the back of his mind he’s got to be wondering if she’s quite as powerful over the Del Mar surface as she is at Santa Anita where she now has won three of four starts.

CHANDELIER STAKES - Moonshine Memories, winner of the Grade 1, $300,000 Chandelier Stakes at a mile and one-sixteenth, apparently has no issues with either Del Mar or Santa Anita main track surfaces. She’s now 2 for 2 ‘Where the Turf Meets the Surf’ and 1 for 1 at ‘The Great Race Place.’ Those who wondered if the Malibu Moon filly could relax and get two turns had both questions answered in the affirmative Saturday. She wasn’t overpowering, but she did what the task required and now figures to be a short price to extend her SoCal unbeaten streak next month in the Juvenile Fillies. She may or may not be up to the task. Bob Baffert saddled Faithfully to finish second behind Paradise Woods and Alluring Star as runner-up to Moonshine Memories. Incredibly, the white-haired trainer sent out runners-up in FOUR of FIVE Grade 1 Santa Anita stakes Saturday and WON THE FIFTH!, ‘Star was making just her second career start and ran well enough to give connections hope for the future. She doesn’t appear quite ready to handle the best of her age, but there’s clearly upside.

FRONTRUNNER - The highlight of Saturday’s Santa Anita card was an outstanding performance by Bolt d’Oro in the Grade 1, $300,000 Frontrunner at a mile and one-sixteenth. Like Moonshine Memories, he’s now unbeaten in three starts—two sprints at Del Mar and one route at Santa Anita. But that’s where the similarities end. While ‘Memories merely got the job done, ‘Bolt made it look like easy as he drew clear without taking a deep breath. His clocking was three-fifths of a second faster than Pardise Woods’ and nearly three seconds quicker than Moonshine Memories’ final time. What’s notable is that this son of Medaglia d’Oro out of the A.P. Indy mare Globe Trot is bred to get better with age. That’s a scary thought for those with designs on racing him home in the future. He’s certain to be the one to beat in the Breeders’ Cup Juvenile with the dreaded ‘bounce’ likely to be his most dangerous foe. It should be noted though that 2-year-olds are less likely to ‘react’ to fast races than older horses because youngsters don’t have the aches and pains of older runners. That Bolt d’Oro is trained by low-profile conditioner Mick Ruis will be a source of wagering reservation for some, and that’s understandable. However, those dissenting must remember the adage that says, ‘A loaded gun is dangerous in anyone’s hands.’ Bolt d’Oro is such a weapon.

RODEO DRIVE - Hall of Fame trainer Richard Mandella got Paradise Woods back on track earlier in the afternoon and then enjoyed another female runner’s return to form in the Grade 1, $300,000 Rodeo Drive at a mile and one-quarter on turf. Avenge, who had finished sixth as less than even money favorite in the Yellow Ribbon Handicap at Del Mar and third at a short price in the Gamely at Santa Anita before that, looked as strong as she had last year when she won this race on the way to mere one-length defeat in the Breeders’ Cup Filly and Mar Turf. Finishing ahead of her that afternoon was Queen’s Trust and Lady Eli—no shame in that performance. While notching her fifth win in 10 starts over the Santa Anita turf course, it should be noted that Avenge had a pair of wins in as many tries last season on the lawn at Del Mar. She won’t be favored in the F&M Turf, but her early speed is going to have her in the mix and her quality makes her tough to pass in the lane. That’s a decent combination to have on one’s side and we see possibly another possible BC in-the-money finish for her.

AWESOME AGAIN - The Grade 1, $300,000 Awesome Again, traditional SoCal bridge to the Breeders’ Cup Classic, went to Mubtaahij, a well-travelled, blinkered, 5-year-old making his first start for Bob Baffert. Splitting time between the United Arab Emirates and New York for the last three years, Mubtaahij had collected a 10-race losing streak. His last victory lap came after he romped by 8 lengths in the 2015 UAE Derby at Meydan. A subsequent trip to Louisville and a 9-length loss to American Pharoah in the Kentucky Derby and a similar decision in the Belmont were the first of his 10 losing excursions. Baffert polished Mubtaahij up and had him working in the morning like an energetic young man. The trainer also saddled Cupid, the favorite in the race and winner of his last out at Del Mar. In that race, Cupid appeared to ‘wait’ on competition through the lane. That’s rarely a good sign and something Baffert-trained runners hardly ever do. So, Saturday Cupid had blemishes. Mubtaahij didn’t. He won the Awesome Again by bearing down through the stretch and outrunning a trio of weary foes. Mubtaahij may find himself as part of a Baffert brigade in the Breeders’ Cup Classic, but that water will be over his head.

VOSBURGH - Hours before Mubtaahij, a former Kiaran McLaughlin pupil won the Awesome Again, Takaful, a current McLaughlin student, parlayed a runner-up effort in the H. Allan Jerkens behind Practical Joke at Saratoga into a solid Grade 1, $350,000 Vosburgh victory at Belmont. The tally was rewarding for everyone involved with the colt because despite talent he’s also displayed plenty of behavioral quirks. Takaful ran down trainer Jorge Navarro’s resurgent speedster El Deal. Always fast, 5-year-old El Deal has found increased stamina since moving to the Navarro barn and before the Vosburgh had won three in a row, including the Grade 1 Vanderbilt by 8 lengths at Saratoga! ‘Deal displayed his usual early speed and it looked for a moment like he would add the Vosburgh trophy to his mantle. However, 3-year-old Takaful was too determined in the lane and came away nicely. Baffert’s Drefong is the current BC Sprint favorite, but he won’t run again until that race. El Deal’s blazing speed and Takaful’s recent determination will add intrigue to the Sprint and will guarantee a lively pace in the race, as if that wasn’t already expected with the blazing Imperial Hint scheduled to run.

PILGRIM - The Grade 3, $200,000 Pilgrim for 2-year-olds went to Seabhac from the Todd Pletcher barn. He ran well enough, but may have been second best in the race to Chad Brown’s Voting Control. The latter had a very rough start pinched between two others and then closed too late to matter. Seabhac (pronounced something like SHOKE) was fourth behind Catholic Boy in the With Anticipation. Not sure how much this effect this race will have on the BC Juvy Turf, but since there is so little 2-year-old turf form we may want to review it again come BC time.

BELDAME - In the stretch of the Grade 1, $400,000 Beldame Stakes at a mile and one-eighth around one turn it appeared as if heavily favored Elate might not win. She and jockey Jose Ortiz were blocked behind horses, crying out for running room. Jose’s brother Irad was astride one of the roadblocks—a tiring Bishop’s Pond on the inside— and presumably heard his sibling’s pleas and moved his mount aside. With running room, Elate levelled out and hit another gear. In a heartbeat she drew off to win by open lengths. Based on her desperate second to Abel Tasman in the Grade 1 Coaching Club Oaks and her rousing Grade 1 Alabama win, both at Saratoga, Elate already is accepted as ‘one of the ones’ in a talented 3-year-old filly division. Saturday she met elders for the first time and easily disposed of them. It should be noted that this was not a particularly robust group of older mares and the water will get considerably deeper when Elate ventures to Del Mar for the BC Distaff. However, she is sharp and improving--two important positives for a sophomore. She’s also ‘had a recent race,’ something both Distaff designated elders Stellar Wind and Forever Unbridled lack. Personally, it would be OK if some BC divisional favorites that hadn’t run for months leading up to Breeders’ Cup came up a tad short because of a lack of fitness.

JOE HIRSCH TURF CLASSIC – In what appeared on paper to be a wide-open Grade 1, $500,000, 41st renewal of the Joe Hirsch Turf Classic at a mile and one-half, Beach Patrol emerged as an impressive winner. The star of the Arlington Million in August hadn’t won a race before that since the Grade 1 Secretariat at the same Chicago track a year earlier. In between those wins Beach Patrol had made six starts—five in Grade 1 races—with four original seconds, a third and a fourth-place finish. Always finishing close to the winner, if Beach Patrol could borrow about seven lengths and use them to cover debts from a year’s worth of races he’d be on an 8-race winning streak. Now that Beach Patrol finally has back-to-back victories and may be finding his best stride, it’s notable that he finished second in the Grade 3 Hollywood Derby on turf at Del Mar, site of this year’s Breeders’ Cup. How handicappers sort out the BC Turf will depend on which runners venture across the pond to contest the race, but Beach Patrol has plenty of positives.

There’s plenty more great racing with Breeders’ Cup implications on tap this weekend at Belmont, Keeneland and Santa Anita. Make sure to visit Xpressbet to watch and wager on the mice as they play while the cats are away!