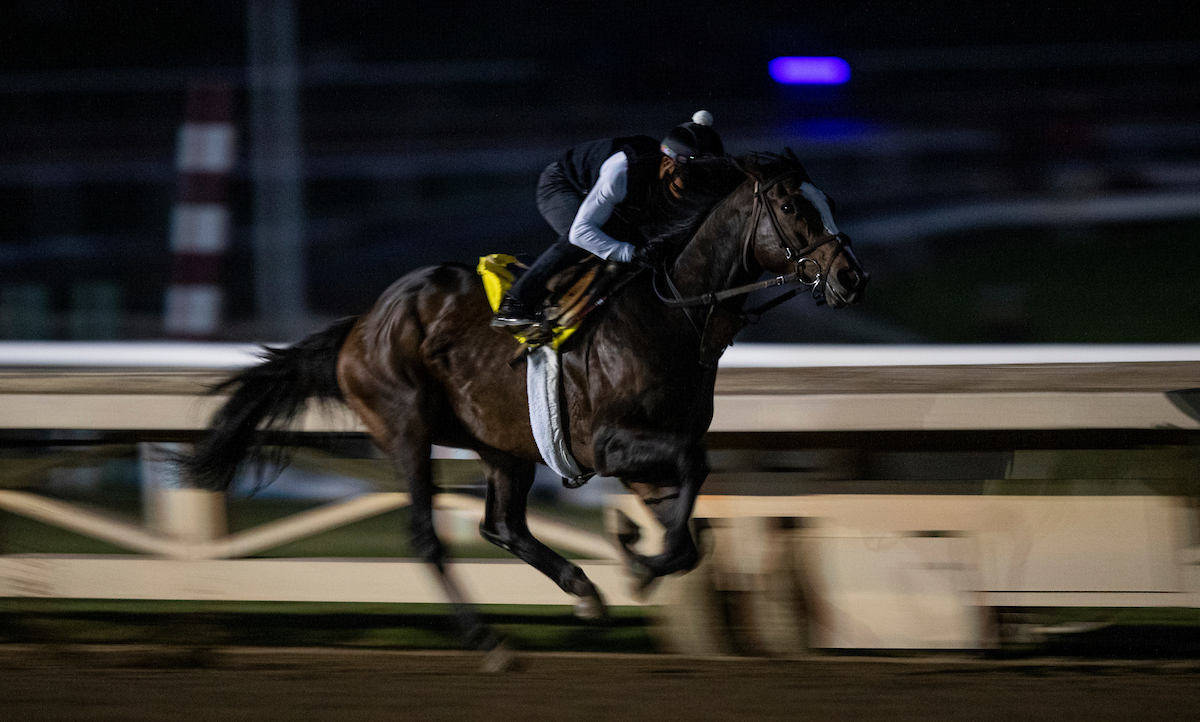 1 – Not sure if Make It Big, victorious in the Springboard Mile at Remington Park last Friday evening, can be considered a major player quite yet for the spring classics, but there’s nothing wrong with at least being in the conversation this time of the year. Now undefeated in three starts following his half-length victory over Churchill Downs invader Osbourne, the Florida-based Make It Big pulled a bit early in traffic, advanced outside in the clear midway, and then was clearly doing his best late to prevail in 1:41.23 over a fast but very deep track that translated into a not-terrible 84 Beyer speed figure.

The Saffie Joseph, Jr.-trained juvenile, from the first crop of Neolithic, a multiple Grade-1 stakes-placed son of Harlan’s Holiday, was purchased for $120,000 at the OBS Spring Sale, a goodly sum considering his first cop sire stood for advertised fee of $5,000. Make It Big’s resume contained a couple of visually pleasing seven furlong wins at Gulfstream Park and was predictably knocked down to 6/5 on the tote.

He’s never raced on Lasix and won’t anytime soon if his connections want to add to the 10 Kentucky Derby qualifying points that he earned in Oklahoma. We might not see him again until the Fountain of Youth S.-G1 March 5, when we suspect he’ll be found out, one way or the other.


2 – Happy Medium somehow managed to get himself beat in his debut last March at Aqueduct – those who took the 22-1 and watched him fade under pressure in the final furlong must now be wondering how that happened – but since returning in the fall the Michelle Nevin-trained gelding has strung together three highly impressive victories, most recently at Aqueduct in a two-other-than extended sprint that earned a career-top equaling 103 Beyer speed figure, one that makes him graded stakes material right now.

In each of his three wins, the son of Runhappy was considerably farther in front at the wire than he was at the furlong pole to indicate that he can switch off and re-break if the situation allows, just as he did on Saturday when crushing his rivals by seven lengths despite being geared down in the final sixteenth of a mile.

Purchased at Keeneland two years ago for $300,000, he’s a half-brother to the outstanding Dubai stakes sprinter Mendip but certainly should stay a mile (at least around one turn), and because he’s a gelding there’s no reason for his connections to do anything that would jeopardize his longevity. Tougher assignments certain lie ahead but it will be fun following him as he moves up the ladder.


3 - Speaking of geldings, Lone Rock and Fearless did themselves proud in their respective victories over the weekend, the former capturing the listed $200,000 Tinsel S. at Oaklawn Park, while the latter, in a career top performance, strolled to a four length score in the Harlan’s Holiday S.-G2 in what certainly should earn him a start in the $3 million Pegasus World Cup-G1 January 28 over the same Gulfstream Park main track.

Lone Rock is without question the premier dirt marathoner in North America – okay, not a major accomplishment but admirable nonetheless – but he proved to be far from just a one-paced stayer after winning the mile and one-eighth Tinsel with a 98 Beyer speed over a track listed as muddy (he’s four-for-six in his career over a wet track). The son of Majestic Warrior has raced for tag only three times and was claimed on each occasion for $40,000, once by Bill Mott and twice by his present conditioner, Robertino Diodoro. The six-year-old concluded his 2021 campaign with seven wins and two seconds from nine outings to improve his career record to 14 victories from 37 career starts.

Fearless, a year younger than Lone Rock and with just 11 career races that includes five wins and three seconds, didn’t make it to the post until December of his 3-year-old season and has had to be started and stopped on a couple of times since then, but he did win the Gulfstream Park Mile-G2 last winter and appears to be as good if not better now than he’s ever been. The Todd Pletcher-trained son of Ghostzapper employs an ideal second-flight, stalking style, so in the Pegasus, if Knicks Go and Life Is Good pummel each other on the lead as what very well could happen, Fearless just might find himself in the right spot at the right time.


4 - The most chilling quote published in various newspaper and trade accounts of Jorge Navarro’s five year jail punishment for using performance enhancing drugs came in a story in Daily Racing Form penned by David Grening, who, when exiting the courtroom, managed to get a response from the trainer after asking if he had any comment following the sentencing.

“The day after they catch everyone, we’ll talk,” said Navarro.

There is a strong belief within the industry that Navarro will eventually implicate others. There is a likelihood that further indictments will be handed down in 2022. We suspect there are a number of nervous trainers and veterinarians who fear a similar fate if and when the new evidence is presented, and this should include owners whose horses were cited in the indictment, especially those whose conversations with Navarro were wire-tapped.

Though he’ll never be able pay it, Navarro was ordered to pay restitution of around $26 million, which represents the amount of purse earnings he “earned” during his reign of cheating.

Navarro got what he deserved. Wouldn’t it be lovely if his owners, or at least those that can be proven knew about it, or even in some cases encouraged it, wind up paying the freight?


5 - Entries were drawn yesterday for opening day, December 26, at Santa Anita with the most intriguing of the six stakes carded being race 10 of 11, the $300,000 Malibu Stakes for 3-year-olds over seven furlongs. Flightline, the undefeated colt who won both of his races by a combined 26 lengths earlier this year, will be making the jump from a first-level allowance sprint into a Grade-1 event, but the bettors won’t be worried about that. The John Sadler-trained colt is certain to be below even money based on speed figures that make him the fastest horse in North America in 2021.

A reminder that we’ll publish our full-card analysis/wagering strategies for the entire Santa Anita season in our blogs at xpressbet.com, xbtv.com, and santaanita.com. Also included will be video links and commentary to key workouts, and a new feature produced by our personal analytics program that will provide true odds for each race’s major contenders that will help identify overlays and underlays. It’s all free, as always.