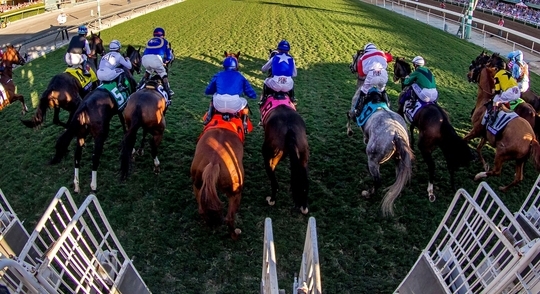 The trio of Grade I races highlighting this Sunday’s card are the Runhappy Malibu Stakes, La Brea Stakes and American Oaks. These same three Grade I races also were run on last year’s opening-day program. Charlatan won the Malibu as the 8-5 second choice in the wagering. Nashville, the 6-5 favorite, finished fourth. Fair Maiden pulled off a 20-1 upset in the La Brea. Duopoly got the job done in the American Oaks at 6-1.

The highly regarded and so far untested Flightline heads the field of seven entered in this year’s seven-furlong Malibu. I installed him as an odds-on morning line favorite.

Runhappy won the 2015 renewal and was voted a 2015 Eclipse Award as champion male sprinter.

Two of this year’s Malibu entrants, Flightline and Baby Yoda, are tied for sporting the highest Beyer Speed Figure so far in 2021. They each have recorded a 114 Beyer this year.

It appears that Flightline is the speed of the speed in the Malibu. It does not look like anyone is fast enough to go with him early. Considering how marvelous he has looked drawing off in the stretch in his two starts, if he does get the jump on his rivals Sunday, it will be a tall task for anyone to beat him.

Flavien Prat has been aboard Flightline in both of his races. Prat’s also been riding Malibu contenders Dr. Schivel and Triple Tap.

Prat has opted to stick with Flightline in the Malibu. It seems fair to consider this a huge endorsement on the rider’s part.

John Sadler trains Flightline. For me, Flightline’s two scintillating performances remind me of what the Sadler-trained Melair did as a 3-year-old filly in the Grade II Silver Screen Handicap at Hollywood Park in 1986. Melair was breathtaking that day.

I called the 1986 Silver Screen chart for the Daily Racing Form. Sent away at odds of 9-5, Melair won by 6 1/2 lengths while completing one mile around one turn in a marvelous 1:32.80. It was at the time the fastest mile that had ever been run by a filly or mare.

Southern Halo finished second in the field of 12. Snow Chief ended up third as the 3-5 favorite, 11 lengths behind Melair.

Snow Chief, who earlier in the year had won the Grade I Preakness Stakes, was voted the 1986 Eclipse Award as champion 3-year-old male.

Melair never raced again after the Silver Screen. She won all five of her career starts.

Sadler has taken a patient approach with Flightline. The decision was made to take their time and go for the Malibu in late December rather than rush him into the Grade I BC Sprint in early November.

“He’s trained up to the race super,” Sadler was quoted as saying Monday in Ed Golden’s Santa Anita stable notes. “We’ve had our eye on the Malibu for a couple of months. It’s the right conditions, 3-year-olds, a Grade I at seven-eighths, which we think is going to be a good distance for him. It will be his first time against better horses, but we’re excited about the challenge.”

A comment made by Kosta Hronis of Hronis Racing to BloodHorse’s Lauren Gash is an indication of the high expectations for Flightline.

“Flightline, he’s not our horse; I think he’s going to be America’s horse,” Hronis said.

Terry Finley, president and CEO of West Point Thoroughbreds, addressed skipping the BC Sprint with Gash.

“Flightline ran so well in September, while tempting, it didn’t take John [Sadler] long to decide and ascertain that he did not want to take that big of a step and run him in the Breeders’ Cup,” Finley said. “The Malibu is logical, especially when we are so excited about 2022 with this horse. We are all in unison. When you have one like this, you can’t wait for them to run, while we all know that no matter the outcome that this was the right path.

“I’ve been doing this for 30 years. We [West Point] have won almost 1,000 races and run in something like 5,600 overall. And I honestly can’t remember a spot or a particular race where I have been more excited about, or the anticipation this high.”

Dr. Schivel merits the utmost respect in the Malibu. Trained by Mark Glatt, the Kentucky-bred Violence colt had a five-race winning streak snapped when he finished second the BC Sprint. He ran too good to lose that day. Dr. Schivel lost by a scant nose to Aloha West.

In Dr. Schivel’s final start prior to the Breeders’ Cup, he won the Grade I Santa Anita Sprint Championship by 3 1/4 lengths on Oct. 2, a race in which he recorded a career-high 103 Beyer Speed Figure. He was credited with a 100 Beyer for his narrow defeat in the BC Sprint.

What made Dr. Schivel’s Oct. 2 triumph all the more impressive is he won with authority even though Prat lost the use of his right rein early in the race owing to an equipment malfunction. It was a tremendous exhibition of riding prowess on the part of Prat.

Meanwhile, Triple Tap certainly should not be taken lightly in the Malibu. He’s two for two. He won going away both times. How good is he? Who knows? We should have a better idea after he gets tested against the likes of Flightline and Dr. Schivel.

Triple Tap won a seven-furlong maiden special weight race by 4 1/4 lengths when unveiled at Santa Anita back on March 13. He recorded an 83 Beyer Speed Figure. Triple Tap did not race again until he roared home to win a six-furlong allowance/optional claimer by 2 1/4 lengths in an excellent 1:08.44 at Del Mar on Nov. 5. His 97 Beyer showed significant improvement in that department.

What adds to Triple Tap’s appeal is his breeding. Not only is the Kentucky-bred Tapit colt a half-brother to Triple Crown winner American Pharoah, he is a full brother to Grade I winner Chasing Yesterday.

Inasmuch as Triple Tap has two wins in two starts, a wonderful pedigree and several sharp workouts since his Nov. 5 victory, it will not be surprising if he has a big say in the Malibu.

Below are my selections for all six stakes races on Santa Anita’s opening-day card:

The 2021 American Racing Manual, which now is digital only and available for free on The Jockey Club’s website, lists Beyer Speed Figure for Malibu winners going back to 1991.

Gordy recently was one of the five 2022 John F. Kennedy Center for the Performing Arts honorees for lifetime artistic achievements.

“The Kennedy Center Honors celebrates luminaries whose art and creativity have enriched us beyond measure,” chairman David M. Rubenstein is quoted as saying on the website www.kennedy-center.org.

Rubenstein said: “Visionary music producer and songwriter Berry Gordy brought the quintessential soulfulness of Detroit into every home in America, elevating the Motown sound to become a national treasure.”

This also was written of Gordy on the Kennedy Center’s website: “A man of vision, drive, talent and determination, Berry Gordy became a boxer, songwriter, producer, director and entrepreneur, and founded Motown -- the hit-making enterprise born in Detroit, Mich. He discovered and nurtured the careers of Smokey Robinson and The Miracles; Diana Ross and The Supremes; Stevie Wonder; Michael Jackson and The Jackson 5; Marvin Gaye; Lionel Richie and the Commodores; Martha Reeves & The Vandelllas; The Temptations; Gladys Knight & The Pips; and many other musical greats and is responsible for the ‘Motown Sound’ that reached across a racially divided, politically and socially charged country, to transform popular music.”

I kid you not, while I was typing the above paragraph, Marvin Gaye’s 1971 song “What’s Going On” came on while I was listening to the music streaming on “That 70’s Channel.” That Motown hit is one of my all-time favorite songs. I bought that 45 record. If you are interested in further information regarding the song, check out the Wikipedia link: https://en.wikipedia.org/wiki/What%27s_Going_On_(Marvin_Gaye_song)

In addition to being a boxer, songwriter, producer, director and entrepreneur, Gordy has been an owner of racehorses, such as Argument and the aforementioned Powis Castle.

Powis Castle won three of four starts, all in sprints, as a 2-year-old in 1993. His victories came in a Churchill Downs maiden special weight race, a Churchill allowance race and the Turfway Park Prevue Stakes back when they raced on dirt there.

Anthony Reinstedler trained Powis Castle in 1993. Rash, a former assistant to the great Charlie Whittingham, then took over the training duties.

Gordy then had the thrill of having a starter in the Kentucky Derby. Powis Castle, with Chris Antley in the saddle, finished eighth on a sloppy track at odds of 20-1 in the field of 14. Go for Gin, ridden by Chris McCarron, won for trainer Nick Zito. Strodes Creek, trained by Whittingham, finished second. Blumin Affair, conditioned by Jack Van Berg, came in third.

Powis Castle subsequently finished ninth in the Preakness Stakes, which was won by Tabasco Cat. In his next start, he won a division of Del Mar’s Oceanside Stakes on the grass.

After the Oceanside, Powis Castle lost four straight before capturing the 1994 Malibu, which at the time had Grade II status. Sent off at 7-1, he completed seven furlongs in 1:20.96.

Though Powis Castle registered a splendid 113 Beyer Speed Figure in the Malibu, he won just two of his next 13 starts before being retired.

Rash died at the age of 36 on March 1, 1996, from the rare blood disorder thrombotic thrombocytopenic purpura. That was before Powis Castle’s racing career was over. Ben Cecil became the trainer for Powis Castle’s final three starts.

Below are the Beyer Speed Figures for Malibu winners going back to 1991: