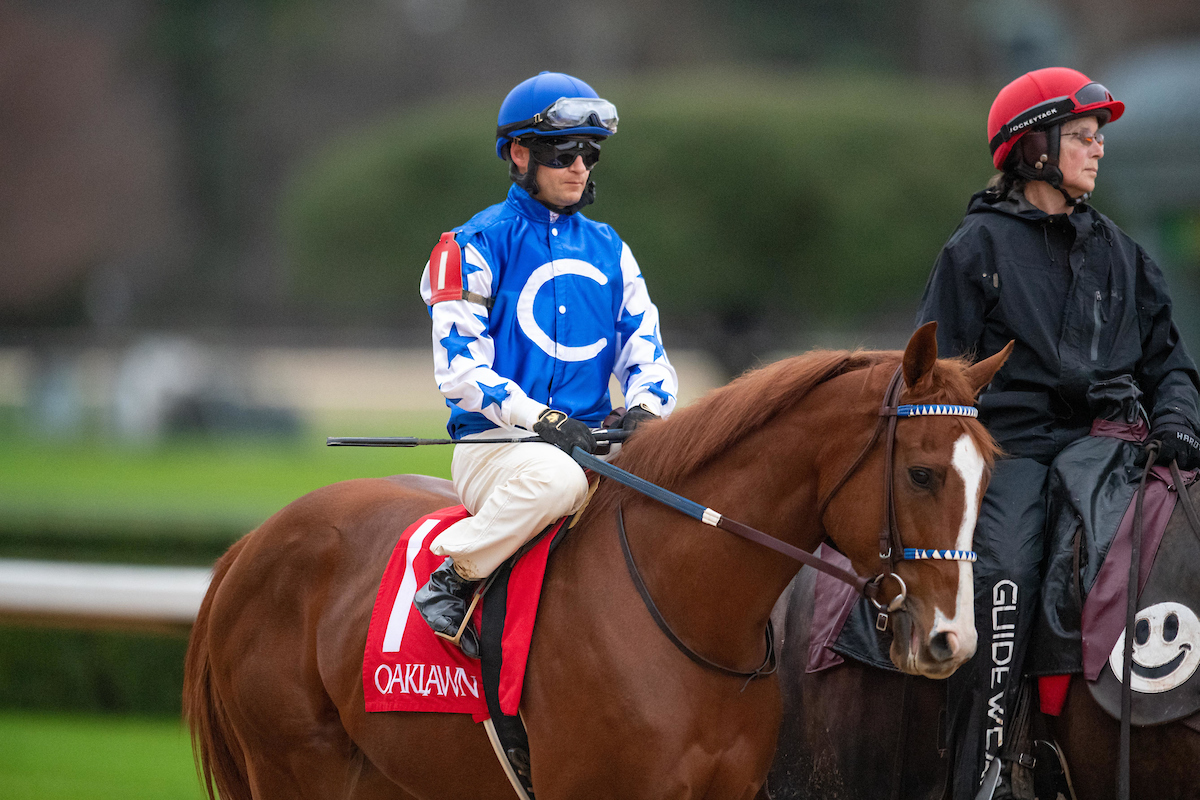 1 - The three finalists for each of the 2021 Eclipse Award categories have been announced. We were happy to see Flightline included in the Sprint division because, after all, he WAS the fastest sprinter in North America last year. But he wasn’t the most accomplished.

We no longer participate as a voter in the Eclipse Award proceedings, but when we did, we always tended to choose the horse that we simply thought was the best. In retrospect, that might not have been a proper course of action. The entire body of work, which includes the ability to participate year round, must be factored in. So, in 2021, Jackie’s Warrior should, and almost certainly will, get the trophy.

While his disappointing performance in the Breeders’ Cup Sprint-G1 was a stain on an otherwise spectacular sprint campaign, one poor race should not cost a horse a title if the resume is strong enough, and in the case of Jackie’s Warrior, it was. In his 2022 racing season, which was launched in February in hopes that he might develop into a legitimate candidate for the Spring Classics (he didn’t), the Maclean’s Music colt won four graded stakes races and placed in two others. And while just one of those victories was earned in a Grade-1, that win, in the seven furlong H. Allen Jerkens Stakes at Saratoga, came at the expense of Life Is Good, a better, faster thoroughbred than any horse Flightline has ever faced. Life Is Good was undefeated at the time, and subsequently won the Breeders’ Cup Mile-G1. He’s a legitimate finalist for champion 3-year-old honors.

The Jerkens was the best, most defining sprint race of the year. It was won by Jackie’s Warrior. He deserves the championship.

Okay, now having said that, if Jackie’s Warrior ever sees Flightline, he should run for the hills.


2 - Hall of Famer John Velasquez was handed a three-day suspension by the Santa Anita stewards for causing interference that resulted in the disqualification of Con on the Run in the first race on Friday, January 14.

We didn’t even think the winner should have come down. Yes, there was a minimal brush between the first two finishers, and while the disqualified winner did drift a couple of lanes and float out the runner-up Tizlightning in the final sixteenth, it certainly looked to us like the order of finish was not affected, and that the neck margin of victory was definitive.

But, on the egregious scale of 1-10, it was about a six, so we’ll just shrug it off and be happy we weren’t involved. The decision certainly was nothing like the completely absurd disqualification of My Boy Tate in the Say Florida Sandy Stakes at Aqueduct January 9, which was (channeling our inner Bill Walton here) one of the three worst stewards’ decisions in the history of thoroughbred racing.

As for Johnny V., the way he’s been riding, he’ll survive. Now, maybe some of the “have nots” in the jockey’s room will get some breadcrumbs tossed their way. We hit upon this last week, but through Sunday, some of the very capable guys that have been spinning their wheels at the current meeting include Tyler Baze (1-for-47); Joe Bravo (1-for-27) and Drayden Van Dyke (1-for-26).


3 - Rated R Superstar may not, in fact, be a superstar, but he’s a really neat older gelding, and it was great to see him secure career victory number 10 (from 57 starts) in the $150,000 Four Season Stakes at Oaklawn Park last Saturday. This was his second added money score in his last three starts and boosted his earning past the $1.2 million mark. The son of Kodiak Kowboy made his first start way back in the summer of 2015 when conditioned by Kenny McPeek and actually was Grade-1 placed as a 2-year-old when finishing third behind Brody’s Cause and Exaggerator in the Breeders’ Futurity at Keeneland.

That Rated R Superstar, at age nine, is still competing (and winning) at a high level is simply remarkable. He’s consistent, too, having finished in the money in seven of his last eight starts, five of which were in stakes races. This was his first outing since September and the punters probably thought he would need the race, which in part explains his 25-1 closing odds. Now, his connections have to consider the $600,000 Razorback H.-G3 at Oaklawn Park February 12. The old guy has tried that race four times in the past without success. Maybe the fifth time will be the charm.


4 - We’ve always maintained that if a sprinter is ever going to stay two-turns, his best chance will be in his first try. The first-time sprint-to-route angle is a powerful handicapping tool, especially when the horse in question projects to be on the lead or at least gain a favorable stalking position. An inside post makes the play even stronger. The angle certainly applied to Olympiad, who, in a 1 1/16 mile second-level allowance affair at Gulfstream Park on Saturday, was trying two-turns for the first time after finishing a respectable fourth in the one-turn Cigar Mile-G1 at the Big A last time out. The Bill Mott-trained colt was knocked down to 3/5 – on paper he looked it - and delivered as expected but did so in such a manner that suggests his sprint days should be behind him.

The four-year-old colt relaxed off the pacesetter in hand, kicked clear when ready, and drew off to register a more than seven length score while earning a 101 Beyer speed figure. Now, Olympiad looks very much like a major player in middle distance events for older horses and it will be interesting just how aggressive his connections get with him during the winter and spring season. We’ll be surprised if he’s not a graded stakes winner very soon.


5- Pool 2 of the Kentucky Derby future wager will be offered this upcoming weekend beginning on Friday at Noon ET and closing on Sunday at 6 p.m. ET, with the mutuel pool – which includes Corniche and any other horse trained by Bob Baffert – listed at 7/5 on the “morning line.”

There is one Derby prep scheduled this weekend – the Lecomte Stakes at Fair Grounds on Saturday – so if you are planning on diving in you should certainly wait until after the results of that race are known and can be evaluated.

Is there anything on the board worth playing? Well, as long as we’re just taking shots, there are three at least three that seem a bit intriguing:

The Todd Pletcher-trained Emmanuel (30-1), a colt by More Than Ready who was a debut winner by almost seven lengths on the lead over a one-turn mile at Gulfstream Park in mid-December and has been training steadily since.

The Ken McPeek-trained Dash Attack (20-1, pictured atop blog), a son of Munnings who is unbeaten in two starts, including the Smarty Jones S., with both victories over wet tracks and around two turns from the off-the-pace

Another Pletcher-trained colt, Major General, (50-1), by Constitution and a winner of his last two starts including the Iroquois S.-G3 at Churchill Downs in September. He’s back in training with a couple of easy recent breezes at Palm Beach Downs.