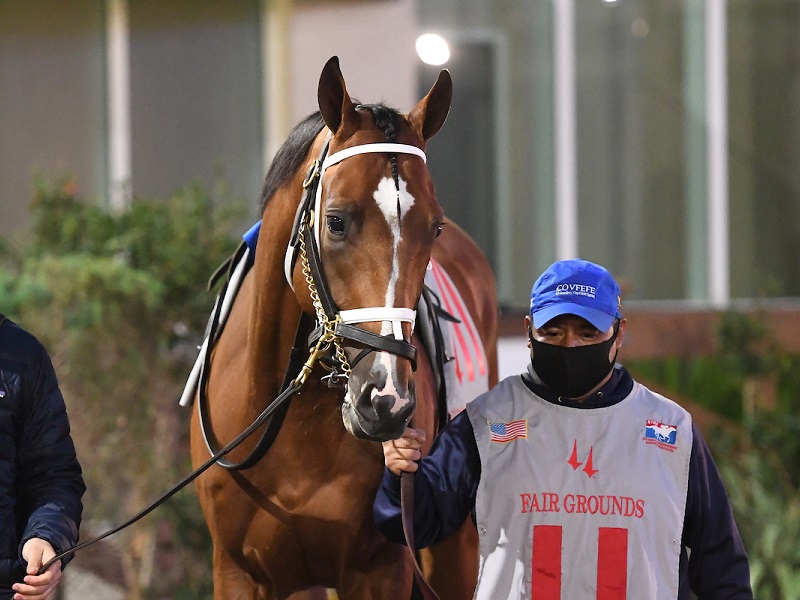 1 - Even after Corniche completed a perfect freshman campaign (three-for-three including two Grade-1’s) with a dominating gate-to-wire victory in the Breeders’ Cup Juvenile-G1, we were prepared to accept the initial impression that the 2-year-old class of 2021 wasn’t much better than ordinary. So when Pappacap made his seasonable bow in the Lecomte Stakes-G3 at Fair Grounds last weekend, we eagerly anticipated the opportunity for further reflection and analysis on the overall crop and specifically the merits of Corniche, to whom the Mark Casse-trained colt had finished second to in both the BC Juvenile and the American Pharoah S.-G1 last fall.

Pappacap, himself a Grade-3 winner in California last summer at Del Mar but something of a trial horse since, struck us as being genuine and consistent but perhaps a bit of an overachiever, and thus was an absolute “play against” in the Lecomte, especially with the presence of the Steve Asmussen-trained Epicenter, a recent runaway winner of the listed Gun Runner Stakes at Fair Grounds last month. Epicenter would leave at 8/5 as the second choice behind Pappacap (3/2) and looked all over the winner every step of the way while enjoying a cozy and uncontested trip on the front end.

But if Epicenter was truly all that, he would have never been tagged on the wire by the late charging (and obviously improved) Call Me Midnight, who required five races to break his maiden and was last seen finishing a non-threatening seventh (beaten 10 lengths) in the Kentucky Jockey Club S.-G2 at Churchill Downs in November behind Smile Happy, who many sharpies believe is the best Derby prospect currently in training.

The victory by Call Me Midnight certainly adds fuel to Smile Happy’s reputation, while Pappacap’s third place finish, despite a perfect, ground-saving trip, does little to refute the belief that Corniche, his Eclipse Award credentials notwithstanding, may be little more than a JAG (just a guy).

For the record, Call Me Midnight’s Beyer speed figure of 88 represented a career top and a 13 point jump from the string of 74’s he had earned in his previous three starts. The number is okay but there has to be quite a few better 3-yearolds out there somewhere.


2 - In handicapping last Saturday’s Louisiana Stakes at Fair Grounds, we sided with Midnight Bourbon in what looked to be a virtual match race with Mandaloun. The Steve Asmussen-trained colt was clearly the quicker of the two and projected to inherit the role as the controlling speed, and his two 107 Beyer speed figures that appeared in his Daily Racing Form past performance chart were five points better than anything Mandaloun had ever achieved. Both colts were coming off layoffs, but each had apparently trained extremely well while providing strong evidence of being fit and ready. Additionally, both displayed prior success over the sometimes quirky Fair Grounds main track, with Midnight Bourbon having defeated his rival in last year’s Lecomte Stakes before Mandaloun turned the tables on him in the Risen Star.

Both were adding Lasix last Saturday, with Midnight Bourbon also being equipped with blinkers for the first time, an equipment change that guaranteed he would be allowed to show his natural early speed.

Two things about the race ending up surprising us.

First, Mandaloun (PICTURED ABOVE), trained by the typically red-hot Brad Cox (28% at the meeting) left as a solid favorite at 4/5 over Midnight Bourbon with serious punters clearly seeing something in this head-to-head matchup that we missed. Second, despite enjoying the lovely, uncontested front-running trip that we believed was the key to the race, Midnight Bourbon simply was unable to rise to the occasion when challenged by Mandaloun from the quarter pole to the wire, eventually going down by a decisive three-quarters of a length that left no doubt which was the better colt.

The key factor that we failed to give sufficient emphasis to in the handicapping process was that Midnight Bourbon now has won just two races from 14 career starts and has failed to finish first in each of his last eight outings. Conversely, Mandaloun’s lifetime mark now reads a much more impressive six wins from nine career races, though to be accurate one of those victories came via disqualification in the Haskell Stakes.

Bottom line is one horse wants to beat you and the other doesn’t quite have the same killer instinct. We’ll try to remember that the next time they meet in the $20 million Saudi Cup-G1 February 26.


3 - First Constitution was a hot-shot 3-year-old in Brazil in 2020, winning his first three races by a combined 38 lengths before finishing third as the 6/5 favorite in his final South American start in that country’s St. Leger-G1 over an 11 furlongs. It was expected that he would pick up where he left off when he made his North American debut at Saratoga in September of 2021, but things didn’t go as planned, as the Northern Hemisphere-foaled son of Constitution finished last of nine while being eased in the stretch to win up 44 lengths behind Thomas Shelby.

Three additional starts during the fall produced much better, in-the-money performances, and although he was still seeking his first U.S. victory in last Saturday’s listed nine-furlong Jazil Stakes on dirt at the Big A, there was hope that the horse would continue to improve with additional acclimation and produce a career top effort.

And that’s exactly what he did.

Taking control in the opening quarter mile from the projected pacesetter (and even money favorite) Core Conviction, the Todd-Pletcher-trained colt simply ran his foes into the ground en route to a nearly seven length victory that produced a career top 100 Beyer speed figure, one that surely will entice his connections to try graded stakes company next time out. There are plenty of options available, perhaps even including a turf race or two, because First Constitution was produced by a Kitten’s Joy mare and has yet to be given a run on grass.


4 - A single speed figure quantifies how fast a horse ran. It doesn’t tell you what he could have run, or what he’s capable of running, which is why you might be advised to ignore the modest 59 Beyer number that was assigned to the first-time starting Vinco in the fifth race at Fair Grounds January 22.

A colt by Quality Road whose third dam produced A. P. Indy, Vinco brought $1.5 million at the 2021 Timonium 2-year-old in training sale, where he knocked a few socks off after breezing 10 seconds flat around the bullring. Though he would not make it to the post until eight months later, the strong, powerful colt had done everything right for trainer Dallas Stewart, and though it might have been disappointing to his connections when he had to settle for second money behind another promising first-timer, Ferociously, he’ll have the opportunity to hone his craft against maidens next time and be much better for the opportunity rather than be subjected to more seasoned and experienced colts that already have advanced to the allowance and stakes ranks.

In the race and after breaking from the disadvantages rail, Vinco encountered severe traffic trouble in the opening stages and was shuffled back to last, a dozen lengths behind the leader after the opening quarter mile. Jockey B. J. Hernandez, Jr., sensing the cause was lost, pivoted to Plan B, which called for an easy run designed for educational purposes. Yet, despite never being knocked about any stage and weaving his way through traffic on his own courage, he miraculously rallied to be second (beaten less than three lengths), before galloping out wanting to do more.


5 - Not surprisingly, “All Other 3-year-olds” closed as the favorite (9/5) in Pool 2 of the Kentucky Derby Future Wager which included any and all runners currently stabled in Bob Baffert’s barn and the Lecomte S. winner Call Me Midnight. The strongest-backed individual colt again was Smile Happy (8-1), who also was the second choice behind the mutuel field in Pool 1, which was offered in late November.

Based on no small part to social media videos that has shown him outworking Smile Happy in a recent drill, Tiz the Bomb, who like Smile Happy is trained by Kenny McPeek, was also heavily supported at 10-1, and while he has done nothing but perform on grass so far in his career, he sure moves like a colt that will get over the dirt just fine.

And, if you take the time to go back and view his last race, when he finished fastest of all to be second in the Breeders’ Cup Juvenile Turf-G1 despite taking the worst of the race flow, you just might conclude that Tiz the Bomb really is the one that all of the others have to be most concerned about.