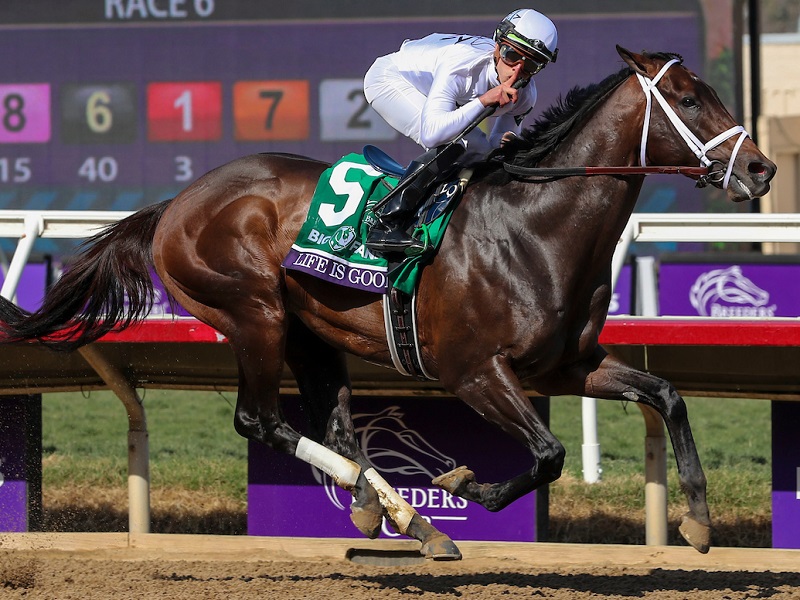 Most players would say the $3 million Pegasus World Cup Invitational will come down to one or the other: Knicks Go or Life Is Good. And that alone trims down the costs in the Late Pick 4, and it could be necessary if the chalk wins in the early races.

But the key to the whole shootin’ match is the Pegasus World Cup Turf Invitational, which goes as the 11th – the third leg of the sequence. It looks like the most legit chance to get a price as connections of 12 older campaigners have thrown their hats in the ring for the 1 1-8 mile test. Defending champ Colonel Liam is the 3-1 favorite, and Todd Pletcher stablemate Never Surprised is 7-2. However, many in there are not without chance, and if there is a pleasing price, it’ll probably come out of this event.

The first two are prime spots for favorites. Wins by Regal Glory (2-1) in the Pegasus World Cup Filly And Mare Turf Invitational Stakes and Fearless (5-2) in the Fred W. Hooper would bring down the chances of a prolific payoff, and if those occur, neither Knicks Go nor Life Is Good can be of any payoff assistance if they win.
For all of those reasons, the suggested Late Pick 4 ticket is lower than usual. This week’s investment is $48, and here is a look and the group of great talent used today:

REGAL GLORY reached the top of her game at the end of 2021, which marked the end of her 5-year-old season. Chad Brown has her doing her best, with four wins in her last six races, including a Grade 1 win in the Matriarch at Del Mar.

Also on the ticket: Nicest.

FEARLESS won the G2 Gulfstream Mile last year, and that propelled him into a solid season, which spanned only five starts. He was a closing second to Silver State in the G2 Oaklawn Handicap, and his only race that could be considered a blemish was when he lost to Girolamo’s Attack in a handicap. He had been off six months, and then he came back a month later and made it all good again as he romped in the G3 Harlan’s Holiday. He has a prolific four of five Gulfstream record, and it’ll take a career best from any of these to beat him this time.

SPACE TRAVELLER is a price in what is the most competitive race in this sequence. He is yet to win a race in North America, but it’s not as if he was in run-of-the-mill turf events. He was fourth in the G1 Mr. D (ex-Arlington Million), second in the G1 Woodbine Mile, fifth in the G1 Keeneland Turf Mile, and fourth in the G2 Fort Lauderdale here. Jamie Spencer is scheduled to come in from Europe for the ride, and he’ll get a favorable pace to set up his late run. There are EIGHT runners on the ticket for this one.

The only time LIFE IS GOOD (pictured above) has trailed at any call was in the G1 H. Allen Jerkens at Saratoga, when he was caught by the tremendous runner Jackies Warrior. Even so, he dug in and was getting to the winner again at the end. His five other races have been a case of him setting fast fractions and living it at the end, sometimes in easy fashion. His best chance is to be in front of Knicks Go at the outset, and that can happen today. He won the G2 San Felipe at 1-1/16 miles by eight lengths, and he can stretch that out to today’s 1-1/8-miles distance.

Also on the ticket: Knicks Go.