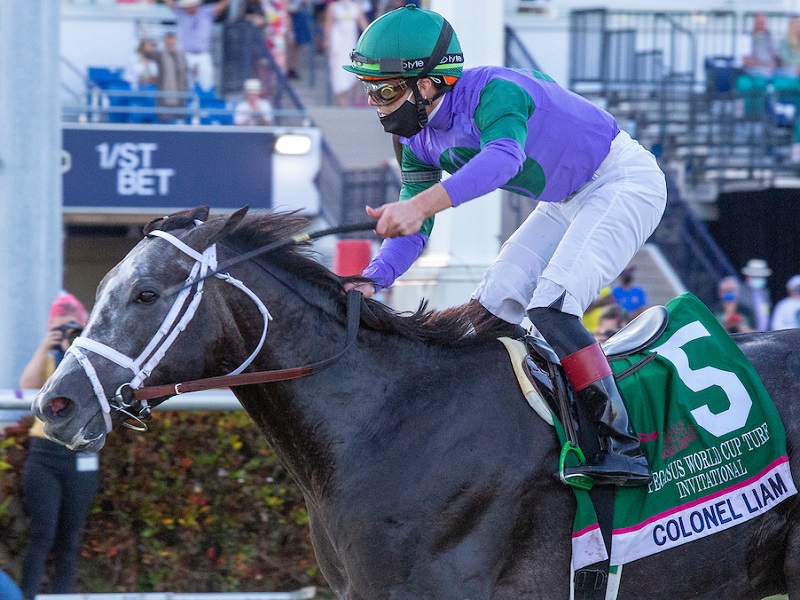 A shade faster than her usual :50 half, she was throttled down from the go and was aching to do more. She found a happy medium down the lane with good energy and galloped out without taking a deep breath. Watching her works this month is a study in a trainer getting a horse to peak at the right time, she looks primed and ready to go.

Filly had a stiff, in-company work the week before (where she was bested) and finished her prep work with a relaxed, solo half-mile. Asked to quicken down the lane, she found more and stretched out with her usual low and long action.

Defending Pegasus World Cup Turf Champ Colonel Liam had an extremely pleasing drill on 1/22 over the Palm Beach Downs surface where he's been training since early December. Jockey Irad Ortiz Jr. could not have willed this colt to go any slower over the 5 furlongs without disrupting his rhythm. Every time his stablemate, the graded stakes-placed Liam, crept up within breathing distance, the grey powerhouse would lean a little harder into the bridle. For this reason, I believe the shorter 1-1/8 miles distance of this year’s PWC Turf will be more ideal, as he can take a tug in the afternoon. Bringing him in fresh was the barn's plan, and judging from this work, he certainly puts enough into his training to get himself ready.

Hit the Road is due some luck. He came down with a fever the day before the Breeders’ Cup Mile and scratched. Then, due to heavy rain the San Gabriel came off the turf and again the colt was scratched. Unlike Colonel Liam, Hit the Road's 119-day freshening was not part of Dan Blacker's plan. Despite that, his colt is working better than ever. A superior work horse on the turf, on Jan. 16 Hit the Road was sharp under jockey Umberto Rispoli. What impressed me most was his ability to sustain his action and energy well beyond the wire, while working alone and having completed his final quarter in a swift :22-1/5. It's possible the deviation from his original campaign is working in his favor.

After watching this work I'm not sure I have enough superlatives to describe it. Jaw-droppingly terrific could be one. With regular rider Amelia Green in the irons, Life Is Good set off from the pole like he meant business, and he did. At first a tad high-headed with Amelia tugging at the reins; once he hit the half-mile pole, he settled into a nice rhythm and cruised through the lane with plenty left in the tank. Actually, the best part for me was the gallop-out, all the way to the five-eighths pole. He should, if need- be, get a comfortable stalking trip outside of Knicks Go depending on the breaks for both horses.

Given a sharpener here working in company and getting a good time. He started on the outside of his barn mate and stayed there while moving fluidly through the lane. He's a good horse and is coming into this as well as ever – while never the flashiest workhorse. Proven on dirt and will love the distance. Will be a price play “when” the speed duel ensues.