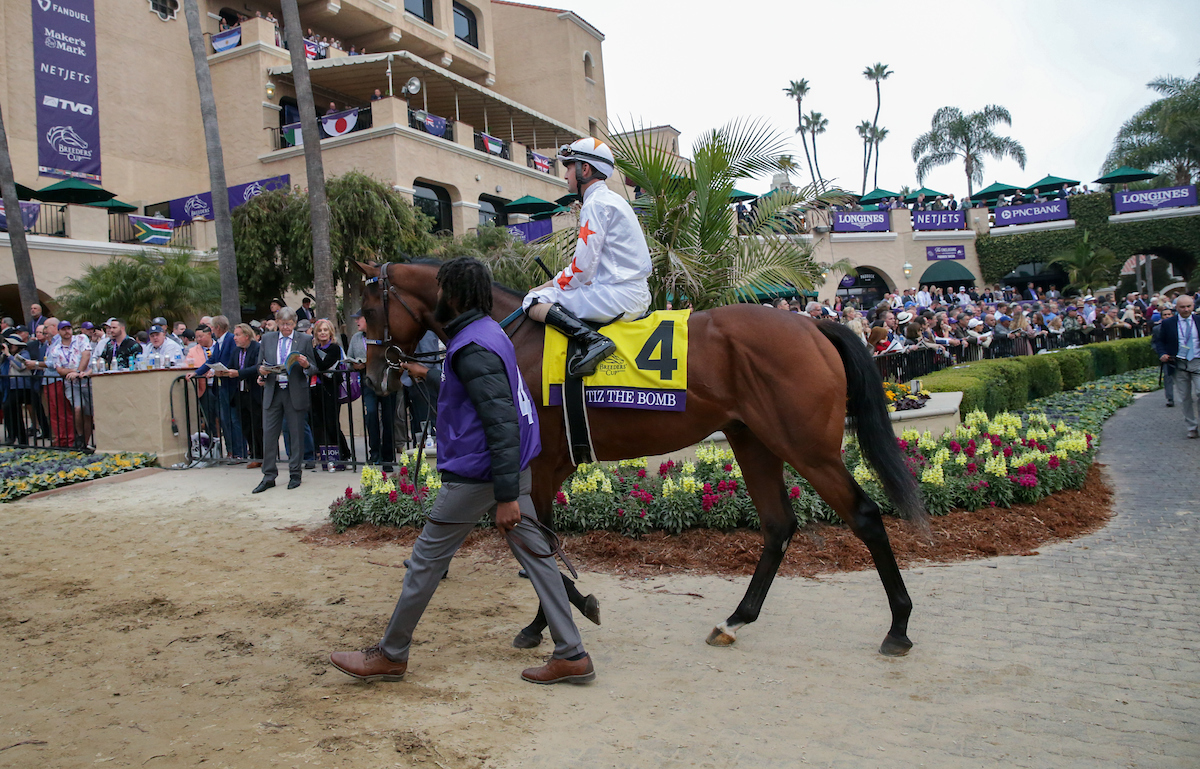 Holy Bull was the Eclipse Award-winning 3-year-old male of 1994. Moreover, he was voted 1994 Horse of the Year. Holy Bull, inducted into the Hall of Fame in 2001, ranks No. 64 on my list of the Top 100 Racehorses of the 20th Century to have raced in North America.

Gulfstream Park pays tribute to that champion this Saturday when nine 3-year-olds clash in the Grade III Holy Bull Stakes.

My selections for the 1 1/16-mile Holy Bull are below:

When last seen under silks, Tiz the Bomb closed strongly from 12th to finish second to one tough dude, European shipper Modern Games, in the Grade I Breeders’ Cup Juvenile Turf at Del Mar last Nov. 5.

Going into the Breeders’ Cup, Tiz the Bomb had reeled off three straight victories. The Kentucky-bred Hit It a Bomb colt won a one-mile maiden race “in hand” by 14 1/4 lengths on the dirt July 2 at Ellis Park.

After Tiz the Bomb earned his maiden diploma, he took the $500,000 Kentucky Downs Juvenile Mile on Sept. 6.

Next, despite breaking through the gate prior to the start and starting from post 12, Tiz the Bomb won the Grade II Bourbon Stakes on the grass Oct. 10 at Keeneland prior to his runner-up performance in the BC Juvenile Turf.

“There are limited opportunities for 3-year-old grass horses in North America,” McPeek said in Gulfstream’s online Holy Bull preview. “He’s really a talented horse and we don’t want to lock him in as strictly a grass horse. There’s no sense pigeonholing him as a grass horse. Even last year we could have made a case for keeping him on dirt, but I chose to keep him separated from some of my other colts. At this stage, we’re going to give him the opportunity to play on the dirt.”

In Churchill Downs’ recent Pool 2 of the Kentucky Derby Future Wager, Smile Happy at 8-1 and Tiz the Bomb at 10-1 were the first and second favorites.

Secretariat.com’s Steve Haskin has Smile Happy atop his Kentucky Derby rankings. Tiz the Bomb is No. 7.

Countdown to the Crown’s Jeremy Plonk also has Smile Happy ranked No. 1 on his list of Top 20 Kentucky Derby contenders. Tiz the Bomb is No. 4.

BloodHorse’s Byron King has Smile Happy ranked No. 3 in his Kentucky Derby Top 12. Tiz the Bomb is No. 5.

Based on his overall record and how smartly Tiz the Bomb has trained up to his first 2022 race, I like Tiz the Bomb to win the Holy Bull.

Simplification, trained by Antonio Sano, won a six-furlong maiden race for Florida-breds by nearly 17 lengths on the dirt Oct. 23 at Gulfstream. The Not This Time colt recorded a robust 92 Beyer Speed Figure.

Before Simplification’s lopsided maiden score, he had finished fifth when unveiled in an Oct. 1 sprint. That race was contested on Gulfstream’s new synthetic oval.

After graduating from the maiden ranks, Simplification finished a disappointing third as a 1-5 favorite in a six-furlong allowance/optional claiming race on the dirt Nov. 13. He plummeted to a 59 Beyer Speed Figure.

But Simplification then rebounded big-time to win Gulfstream’s one-mile Mucho Macho Man Stakes by four lengths on the dirt Jan. 1. He recorded a 90 Beyer.

I am particularly impressed by the 2 1/2 Thoro-Graph number Simplification received for his Mucho Macho Man triumph.

As I’ve stated before, while I think Beyer Speed Figures are a useful tool for horseplayers, I am of the opinion that Thoro-Graph numbers are even better. That’s because Thoro-Graph takes more factors into account that the Beyers. According to Thoro-Graph, “each number on a sheet represents a performance rating arrived at by using time of the race, beaten lengths, ground lost or saved on the turns, weight carried, and any effects wind conditions had on the time of the race.”

In the case of the Thoro-Graph numbers, a horse who finished second, or even lower, can get a better number than the winner. This is one of the things I love about Thoro-Graph. I consider a Thoro-Graph number to be a much truer reflection of a horse’s performance than a Beyer. Thoro-Graph’s approach reflects the reality that the winner is not necessarily the horse who ran the best race.

To put Simplification’s 2 1/2 Thoro-Graph number into perspective, Corniche posted a 4 1/2 when he won the Grade I BC Juvenile at Del Mar last Nov. 5.

Smile Happy recorded a 2 with the Thoro-Graph folks when he won the Kentucky Jockey Club last year.

When Jack Christopher won last year’s Grade I Champagne Stakes at Belmont Park, he was credited with a 102 Beyer Speed Figure. It was the top Beyer by a 2-year-old in 2021.

But Jack Christopher’s Thoro-Graph number for the Champagne was a 4 1/2, not as snazzy as his Beyer.

Jack Christopher, who is back in training after a shin injury that required surgery, has been removed from my “bubbling under the Top 10” list this week after trainer Chad Brown told Daily Racing Form’s Marty McGee that the colt is “not close” to a workout.

The serious 2 1/2 Thoro-Graph number put up by Simplification in the Mucho Macho Man tells me that he should be taken very seriously in the Holy Bull.

When stretched out to 1 1/16 miles, Mo Donegal won a maiden contest by 1 1/2 lengths at Belmont on Oct. 21. He subsequently eked out a nose victory over highly regarded Zandon in Aqueduct’s Grade II Remsen Stakes at 1 1/8 miles on Dec. 4.

“I’m really pleased with his training since he came here after the Remsen,” Pletcher said of Mo Donegal in Gulfstream’s online Holy Bull preview. “He has not missed a beat since he’s been here.”

Why is Mo Donegal or Zandon not on my latest Kentucky Derby Top 10 list? Mainly it’s because the Remsen, in which they both last raced, has not exactly been a harbinger of success in the Run for the Roses. You have to go all the way back to 1995 Kentucky Derby victor Thunder Gulch to find a Remsen winner who would go on to snag the roses.

Giant Game should not be taken lightly in the Holy Bull. The Kentucky-bred Giant’s Causeway colt finished third when debuting in a seven-furlong maiden race at Churchill Downs last Sept. 18. He received a 69 Beyer Speed Figure.

In a longer 1 1/16-mile maiden race Oct. 9 at Keeneland, Giant Game won by three widening lengths and improved to a 79 Beyer.

In the BC Juvenile, Giant Game loomed menacingly while wide turning for home before finishing third to Corniche and Pappacap. Showing further improvement Beyer-wise, Giant Game recorded an 86 in that race.

All indications are that Giant Game, who has fired a number of bullet workouts, is coming up to the Holy Bull in fine fettle for trainer Dale Romans.

AQUEDUCT’S WITHERS DRAWS A FIELD OF 11

My selections for the 1 1/8-mile Withers are below:

Early Voting, trained by Chad Brown, has only one race under his belt. He won a one-mile maiden race by 1 1/2 lengths at Aqueduct on Dec. 18. It appears to me that the Kentucky-bred Gun Runner colt has much upside.

“He didn’t earn a fancy figure [76 Beyer] or anything, but when you see a son of Gun Runner debuting at a mile on the dirt and winning first-time out on kind of a dead track you have to take notice,” Brown said in a Jan. 7 story written by Thoroughbred Daily News’ Bill Finley. “I’m not one to have a horse cracked for their best number at that time of year. He’s an interesting horse going forward.”

Courvoisier is seeking his third consecutive victory. Trained by Kelly Breen, the Kentucky-bred Tapit colt lost his first three starts, then won a 1 1/8-mile maiden race at Aqueduct on Dec. 2. After defeating maidens, Courvoisier splashed home to a 1 1/4-length win in the one-mile Jerome stakes on a sloppy track Jan. 1 at the Big A.

Cooke Creek had the misfortunate to get post 11 in the Withers. Nevertheless, he belongs on the list of contenders. He won the Rocky Run Stakes at Delaware Park on Oct. 16, ran second in Aqueduct’s Grade III Nashua Stakes on Nov. 7, then finished third in the Jerome.

Emmanuel debuts on my Top 10 this week all the way up at No. 3. He is two for two following a ridiculously easy 4 1/2-length win in a Tampa Bay Downs allowance/optional claiming race at one mile and 40 yards last Sunday.

According to Pletcher, look for Emmanuel to run next in Oaklawn Park’s Grade II Rebel Stakes on Feb. 26, Gulfstream’s Grade II Fountain of Youth Stakes on March 5 or the Grade II Tampa Bay Derby on March 12.

This week’s Kentucky Derby Top 10 is below:

BUBBLING UNDER THE TOP 10 (IN ALPHABETICAL ORDER)

The Eclipse Awards were established 50 years ago to recognize excellence in Thoroughbred racing. The 2021 finalists were revealed last month.

The first year that I made Eclipse Award predictions for Xpressbet.com was for racing that was conducted in 2011. My predictions have proved to be correct 91.4% of the time:

And now here are my predictions for the 2021 Eclipse Awards: