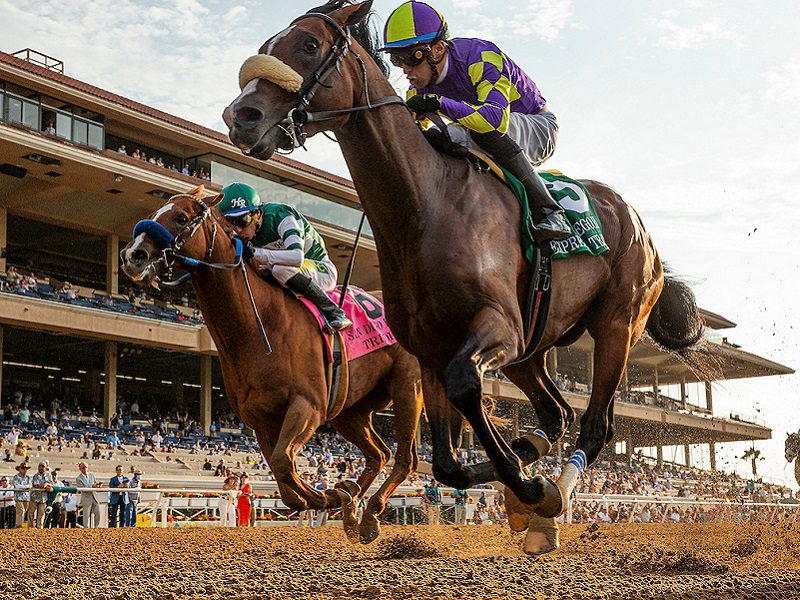 The Lead:
The key local prep to next month's Grade 1 Santa Anita Derby, the Grade 2 San Pasqual is among a trio of stakes on the local Saturday program. It's joined by the Grade 2 Santa Monica for distaff sprinters and the Grade 3 Thunder Road for turf milers. The San Pasqual goes as Race 8 over 1-1/8 miles, a furlong shorter than the Big 'Cap slated for March 5.

​Field Depth:
Grade 1 winner EIGHT RINGS is joined by Grade 2 winners KISS TODAY GOODBYE, EXPRESS TRAIN, SPIELBERG and LAW PROFESSOR. AMERICAN THEOREM is Grade 1-placed. For the most part, these are familiar foes not separated by much in the class department. KISS TODAY GOODBYE and EXPRESS TRAIN have consistently kept the strongest company lines, however.

Pace:
EIGHT RINGS should set the tone with AMERICAN THEOREM the main early threat. KISS TODAY GOODBYE is the only deep closer, leaving the other trio to fill out the midflight spots. This appears a fair pace for all styles over 1-1/8 miles.

Our Eyes:
Defending San Pasqual champion EXPRESS TRAIN beat arguably a tougher cast in this race last year, and did so while facing elder stakes horses for the first time. Now age 5, he's in top form after winning the Grade 2 San Antonio here on opening day against top-class Hot Rod Charlie. While this is a very solid cast with no filler to it whatsoever, EXPRESS TRAIN's top-end efforts do stand out. Over 1-1/8 miles, he's 3: 1-0-2 lifetime; the rest of this field is 5: 0-1-1. He's going to be tough to topple.

Stablemates EIGHT RINGS and SPIELBERG both were ballyhooed early in their careers, but failed to become Triple Crown series participants and have been recalibrating to the handicap division. EIGHT RINGS can be brilliant upon his best and clearly is the faster of the pair. SPIELBERG has made only one allowance appearance (win) since last year's Florida Derby. In both brilliance and form cycle, EIGHT RINGS would seem to have the better of it. But for 1-1/8 miles, the scales tip to SPIELBERG. With Johnny V and Flavien Prat the riders, they'll get the best of it. Nearly impossible to separate.

KISS TODAY GOODBYE has yet to master the art of consistency. He's run some quality races and then delivers complete disasters far too readily for a top-shelf horse. The pace here doesn't look overwhelming on the front end, so he's going to have to be on his best to rally and get them; it won't just fall into his lap likely. Jockey Abel Cedillo has been riding well of late.

LAW PROFESSOR won the off-the-turf Mathis Brothers Mile last time against a weaker dirt cast than this. He was able to track a quick pace and outgame rival Beyond Brilliant to earn a fast figure. It might have been too tough of a race as he tries to bounce back and go another furlong farther. But his workout tab suggests he's thrived out of it, back drilling 13 days later and posting weekly works right on cue.

Most Certain Exotics Contender:
EXPRESS TRAIN is in peak form and accomplished over this trip.
​​
Best Longshot Exotics Contender:
AMERICAN THEOREM was considered a bright talent at 2, and injuries have stifled his progress. But he showed some of that flash last out in allowance company with the aid of a soft pace. It's a step up in class, but he's got raw talent to draw upon and should be in the pace discussion down the backstretch.
​
Sending it in ($100 bankroll):
$100 win EXPRESS TRAIN.