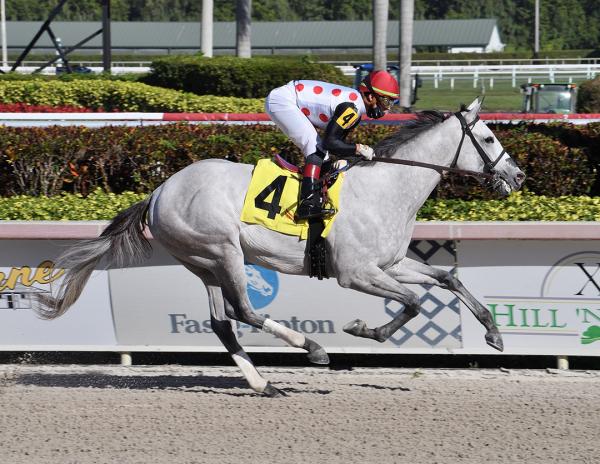 The G3 $250,000 Holy Bull Stakes is the third leg of a strong Late Pick 4 Saturday at Gulfstream Park, and a trio of colts will attempt to move to the top of the race for the Florida Derby. Mo Donegal (3-1 morning line), Tiz the Bomb (5-1) and Giant Game (7-2) attempt to get top-level start to their sophomore campaign. It’s a good group and they’re big players in the sequence, which covers races 9-12. The Holy Bull is the 11th.

Reminder: players using the 1/ST BET and Xpressbet platforms play for an additional $2,000 hit-and-split promo when tackling the late pick 4 at Gulfstream Park every Saturday and Sunday.

The suggested Pick 4 ticket amounts to $63, and here are the combatants:

SOUP AND SANDWICH (pictured above) was second in the Florida Derby here last year and has been idle since October, when he tired in the Perryville at Keeneland. Mark Casse has him back where he’s done his best running, and the Into Mischief colt has a long string of very good works for his return. This is a strong allowance optional claiming race, and a trio is being used on the ticket.
Also on the ticket: VIOLENT CITY, CANDY MAN ROCKET.

NOSTALGIC drew the rail in what looks like an absolute free-for-all. The Bill Mott-trained filly broke her maiden with ease at Belmont two back and made a significant step up the class ladder with a fourth in the G2 Demoiselle at Aqueduct. Has worked once a week since New Year’s Eve Day and the Godolphin runner looks like she fits in this despite not having a lot of experience. There are so many with a legitimate chance, and it makes this the biggest spread race in the sequence.
Also on the ticket: OPALINA, OCEAN SAFARI, MISS YOU ELLA, BATTLE CHARGE, RUNNING LEGACY, HAL’S DREAM.

GIANT GAME made a nice move into contention and held on for third behind Corniche and Pappacap in the Gr. 1 Breeders’ Cup Juvenile at Del Mar. That was only the third career start for the Dale Romans trainee who broke his maiden at Keeneland after running third in his debut at Churchill Downs. He has enough speed to be in good position from the outside post, and rider Saez, who is still hitting at an impressive 25-percent clip at Gulfstream, likely will give him a good trip.
Also on the ticket: MO DONEGAL, TIZ THE BOMB.

VETTORI KIN has spent much of his time racing in higher levels and makes his first Gulfstream start of the year after finishing up 2021 with a sixth-place finish in the mud at Aqueduct. He’s been consistent lately in showing a closing move on turf and has the talent to fire against these.
Also on the ticket: MO READY.