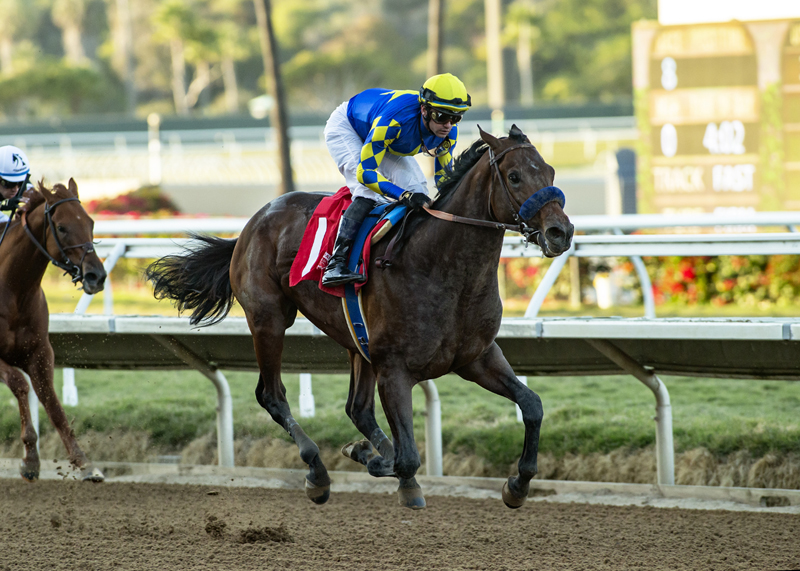 1 - Somehow, someway, Messier managed to get himself beat (twice!) at Los Alamitos, first in a maiden race last summer and then in the Los Alamitos Futurity-G2 in December.

In both races he left at 50 cents on the dollar and in neither race did he have any visible excuse.

But, elsewhere, he’s been pretty good.

The son of Empire Maker won a maiden at Santa Anita in October by an eased-up six and one-half lengths, the Bob Hope S.-G3 at Del Mar in November by more than three, and then last Saturday back at Santa Anita, where he embarrassed four rivals in the Robert B. Lewis S.-G3 by 15 lengths, shrugging off his outclassed competition like water off his back. And if he hadn’t been allowed to coast home, it could have been more.

Here’s another way to put it: since there are approximately 32 thoroughbred lengths contained in a sixteenth of a mile, it’s not hard to envision just how far back the others were when the Bob Baffert-trained colt crossed the wire in 1:42.88 for the mile and one-sixteenth trip. Over a typically deep Santa Anita main track, that clocking translates to a 103 Beyer speed figure, a 17-point improvement over his previous career top and a number that makes him North America’s fastest two-turn three-year-old, with the Kentucky Derby less than 12 weeks away.

The whole world knows that none of this trainer’s 3-year-old prospects at this time can receive qualifying points for Derby eligibility, so Messier will never get a chance at the Triple Crown’s first jewel, at least according to the conventional wisdom found on Twitter, a platform known and accepted universally for both truth and accuracy. Okay, well, not all of the time.

Whether or not Messier will have one or two more races prior to the Kentucky Derby, chances are that unless management at Churchill Downs has a change of heart, he’ll have to make at least one start under the auspices of a trainer other than Baffert. Only then could the colt receive the required qualifying points to be included in the field, which he would earn by finishing first or second in any of the six 100 points-to-the-winner designated stakes that include Florida Derby, Arkansas Derby, Jeff Ruby Steaks S. (scheduled April 2), or the Wood Memorial, Blue Grass S., and Santa Anita (scheduled April 9).

So, for those freaking out that Messier won’t be able to run in Kentucky due to lack of points, we suspect that if he’s heathy, his connections will be smart enough to figure out a way to get him there.


2 - While we’re on the subject of freaking out, you could just sense the panic set in among his connections and his backers when it was revealed that Early Voting, a dominating gate-to-wire winner of the Withers S-G3 at Aqueduct on Saturday, was assigned a Beyer speed figure of “only” 78, a number that might be good enough to win the El Camino Real Derby at Golden Gate Fields this week but certainly not in any stakes races for 3-year-olds at Churchill Downs.

Indeed, the Gun Runner colt’s final three-furlong split (:41 3/5) could just as easily been timed with a sun dial, but because the main track was so deep, so tiring, so sticky and so treacherously slow, it was a given that any front-runner that had cut out similar early fractions to what Early Voting did would feel the effects through the lane and stagger home. That he managed to hold sway by more than four lengths with a just a maiden one-turn miler as his only prior outing was, indeed, remarkable. There were some useful, decent colts behind him, too.

So, regardless of the speed figure, you’d better believe trainer Chad Brown has himself a very good colt, one that might not be seen again until the Wood Memorial in early April in order to ensure proper recovery from what had to be a physically taxing, gut-wrenching effort.


3 - What in the world went wrong with Tiz the Bomb in the Holy Bull S.-G3 at Gulfstream Park on Saturday?

Sure, you could debate how much of an underlay he was at 2-1 (from 6-1 on the morning line) but we certainly didn’t expect the Ken McPeek-trained colt to run this badly. The son of Hit It a Bomb had been training so well (outworking his hot-shot stablemate Smile Happy on at least one occasion) and had juvenile form that showed wins on both dirt and turf and the versatility to be successful on the lead and from off the pace. In fact, in a previous installment of “Five Takeaways,” we stated that this was the colt that all of the other Derby candidates might have to worry about the most.

Approaching the gate as if he had just exited a car wash, Tiz the Bomb broke well enough and was within range for the first half mile or so but then began laboring on a dirt track that we’ll assume he didn’t handle and gradually fell back, eventually winding up seventh of nine, more than 20 lengths behind impressive winner White Abarrio.

By performing so far below our expectations, this colt went from first to nowhere in the first installment of Triple Crown rankings (see below).

As for White Abarrio, this was his first start since finishing a respectable third (beaten six lengths) in the Kentucky Jockey Club S.-G2 at Churchill Downs in November, and it would appear he is better now than then, though it remains to be seen if he can be as effective anywhere other than Gulfstream Park, where he is now three-for-three, for trainer Saffie Joseph, Jr. The son of Race Day will remain in South Florida, skip the Fountain of Youth S.-G2, and head directly to the Florida Derby-G1, where he will be a major player again, especially if he can secure the same kind of perfect, pace-stalking trip that fell into his lap in the Holy Bull.


4 - Earlier on the Sunday Santa Anita program, certainly one of the best 3-year-old fillies in North America, verified the impression she made when beating maidens by 12 lengths last month. Adare Manor stepped into graded stakes company and did the same thing, this time by 13 lengths in the Las Virgenes S.-G2 over a mile on dirt.

A $375,000 OBS June 2-year-old in training purchase, she is an Uncle Mo filly from the good Canadian stakes race mare Brooklynsway and is another product of the Bob Baffert/John Velasquez factory. As it stands now, there simply is no competition for her in California.

Of course, she is burdened by the same issue as stablemate Messier in that nothing trained by Baffert can participate in the Kentucky Oaks-G1 at Churchill Downs, so if her connections wish to point for that race, they’ll have to find a substitute trainer.

As for divisional leader Echo Zulu, she has not recorded an official workout since her Breeders’ Cup Juvenile Fillies victory in early November. The other sophomore filly we’re closely tracking, unbeaten Kathleen O, winner of the listed Cash Run Stakes at Gulfstream Park on New Year’s day, shows a consistent work tab since raced for Shug and we assume will return in the $200,000 Davona Dale S-G2 March 5.


5 - We’re less than 12 weeks away from the Kentucky Derby-G1, so it’s time to reveal our first Triple Crown rankings that are based on projection, not on resume.

Keep in mind that as it stands now, horses currently trained by Bob Baffert cannot earn qualifying points for the Run for the Roses. The list assumes that the connections of such runners will find a replacement trainer for the final significant points-generating events that take place four or five weeks prior to the first Saturday in May. Even with zero points prior to one of these races, a win or a second place finish will be sufficient to gain entrance to the Derby.

Also listed is the “morning line” for this week’s Pool 3 of the Kentucky Derby Future Wager.

1 – Messier (B. Baffert) – Take away his two Los Alamitos flops and he looks like a legitimate candidate not only to win the Derby but maybe even the Triple Crown. He has no Derby points, but he’ll get them when he needs them, with a temporary trainer change the obvious solution. Pool 3: 5/2 (field/all others option)

3 – Smile Happy (K. McPeek) – Undefeated juvenile won both of his starts last year in proper fashion by rallying from off the pace, and over a distance of ground. The screws are beginning to get tightened for his seasonal bow. Pool 3: 8-1

4 – White Abarrio (S. Joseph, Jr.) – His only defeat came when third to Smile Happy in the KJC S.-G2 last fall. Remained unbeaten in three starts at Gulfstream Park with his perfect-trip victory in the Holy Bull S.-G3. Pool 3: 8-1

5 – Rattle N Roll (K. McPeek – Deep closer concluded his juvenile campaign with a smart maiden win followed by a dominating score in the Breeders’ Futurity. Based on his work pattern, he’s still a ways away from his sophomore debut. (Pool 3: 30-1)

6 – Early Voting (C. Brown) – Undefeated in two starts, including a dominating score in the nine-furlong Withers over the deeper-than-quicksand main track at Aqueduct. We suspect he is much better than his modest figures indicate. Pool 3: 12-1

7 – Forbidden Kingdom (R. Mandella) – If there is a colt out West that can warm up Messier, it’s him. Loved his San Vicente S.-G2 score over seven furlongs. The question is, how far can this son of American Pharoah run? Pool 3: 10-1

9 – Zandon (C. Brown) – Won his debut sprinting and then was unlucky when nosed out in the Remsen S.-G2 over nine furlongs. He’s a bit of a grinder but will run all day and shows a steady, healthy, recent work pattern. Pool 3: 30-1

10 – Mo Donegal (T. Pletcher) – Didn’t get the best of runs when rallying too late to be third in the Holy Bull. Lacks a great turn of foot but has no distance limitations. Pool 3: 30-1