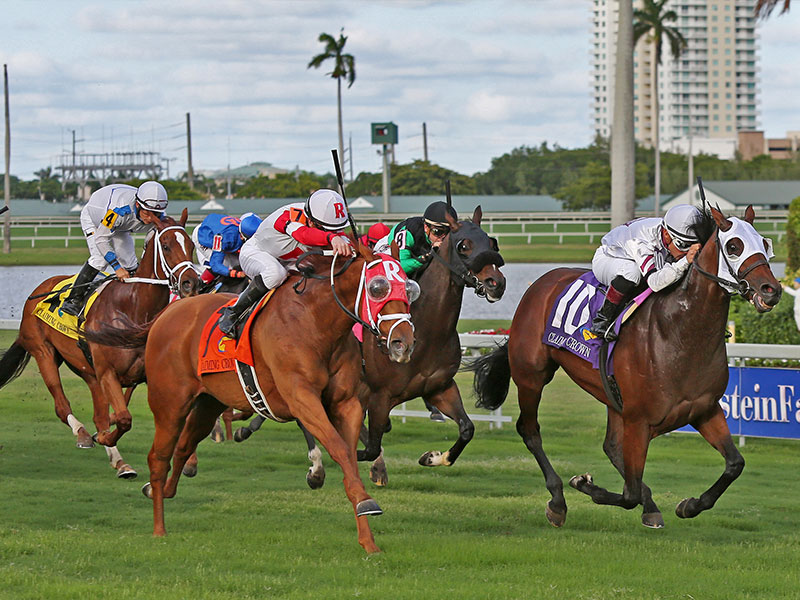 The middle Pick 4 Saturday at Gulfstream Park has turf sprint bookends and is the best group of races on the card.

The suggested ticket amounts to $72, and here’s how I see it:

GEAR JOCKEY’s only dull appearance in two years came with a screaming-out excuse: He was in the B1 Breeders’ Cup Turf Sprint.
He’s run well over the past year, with wins at Gulfstream, Saratoga and Kentucky Downs, where his victory came in the G3 Turf Sprint, less than two months before the sixth-place finish the BC Turf Sprint at Del Mar. His fortunes changed when trainer Rusty Arnold put the Twirling Candy runner on turf, and he’s 4 of 13 over the green stuff.

Also on the ticket: BELGRANO

QUEEN CUPID made a significant improvement when she moved to the dirt after her first two on Tapeta.

She was just off the pace and close well for a good second last out going seven furlongs, and the 6.5 furlongs of this one could be the perfect distance. Jockey Angel Arroyo can take his time getting in good running position since she is more of a mid-pack runner than anything else.

There are several with a good chance in this evenly matched group.

Also on the ticket: I SAID HEY, SOUTH PACIFIC, CHESS NOT CHECKERS.

SPIN RATE makes his second on the claim for Jeff Hiles and has enough speed to be get into the mix. His fourth-place last out was off an eight-month playoff and he’s likely to improve in his first off that break. Ran well at Oaklawn last year and should be a factor at this level locally.

This one is even more wide-open that the sixth, and there are many worth using.

MISS J MCKAY whisked past the field late and won going away in the Abundantia Stakes here last out. It’s unlikely she’ll get the same kind of pace meltdown in front of her, but she’ll still be rolling, and her class could take her home to another victory.