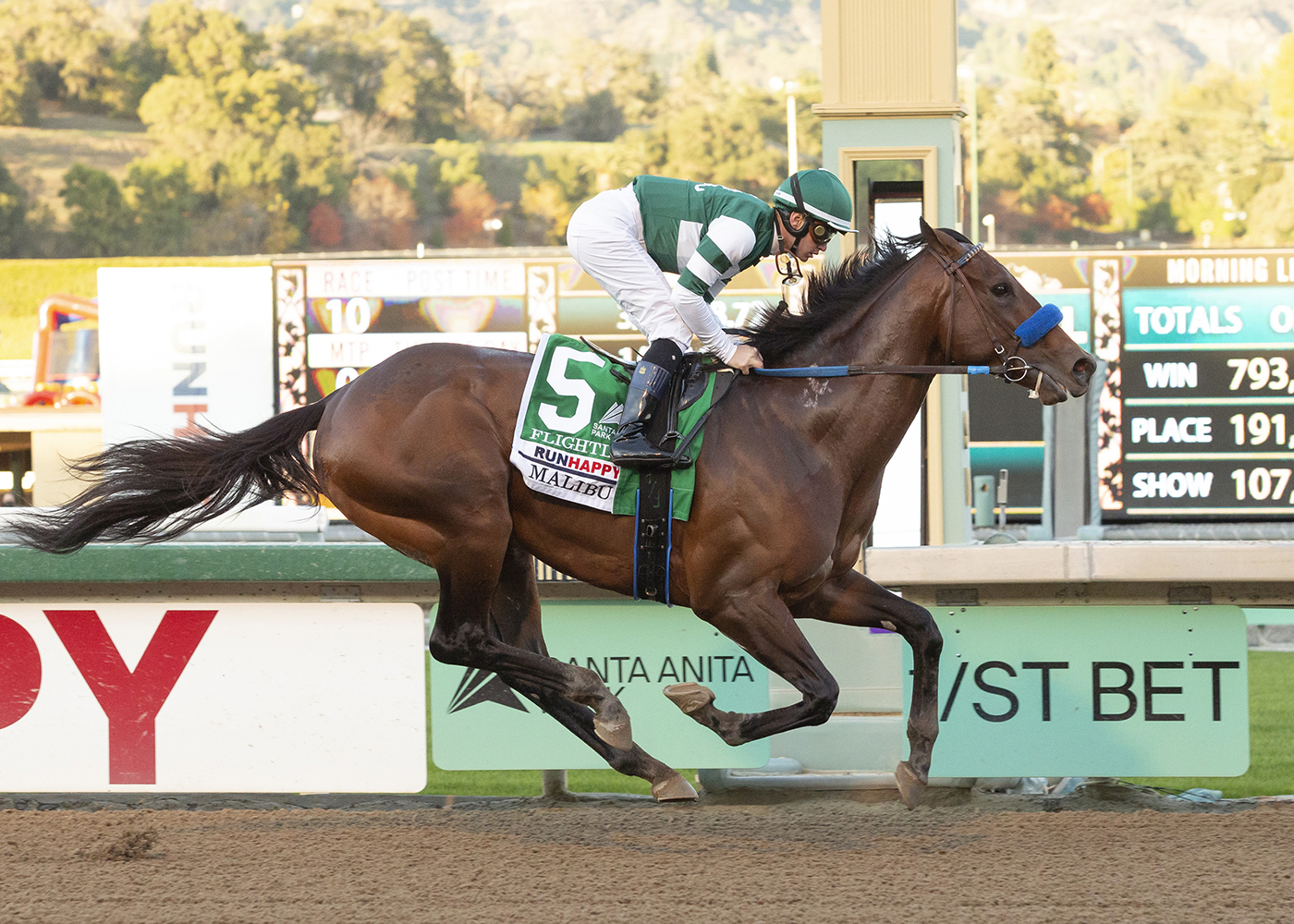 1 - The victory in the Sam F. Davis S. by Classic Causeway last Saturday was visually pleasing but not necessarily definitive when compared to the resumes of other legitimate candidates for the spring classics. Typically, we are inclined to downgrade any winning performance accomplished under the pristine conditions that generally accompany a front-running trip, though in the case last Saturday at Tampa Bay Downs, we must concede that the son of Giant’s Causeway did establish strong early fractions while just breezing along and before kicking clear to win with something left.

His trainer, Brian Lynch, said after the race what we knew he would (and what 99 percent of all horsemen would say), that is, “I do think he will sit in behind (other horses).”

We’ll let’s hope so, but both of his wins in four career starts were accomplished gate-to-wire, so he still has to prove that he can.

Furthermore, given the trip, we would have expected his Sam. F. Davis Beyer speed figure to have cracked the 90 barrier, but the official number of 88 fell short and really was just okay under the circumstance.

If nothing else, the result franked the form of Smile Happy, who easily defeated Classic Causeway in the Kentucky Jockey Club S.-G2 at Churchill Downs in November in a race in which third place finisher White Abarrio exited to capture the Holy Bull S.-G3 at Gulfstream Park a couple of weekends ago. But at this stage – at least according to several respected published speed figures – they’re all looking up to the Bob Baffert-trained Messier.


2 - Speaking of Baffert, he won another Derby over the weekend, this one the non-graded El Camino Real at Golden Gate Fields at nine furlongs over an all-weather surface with Blackadder, a third stringer who had broken his maiden in an off-the-turf affair at Santa Anita in late December. Blackadder, to his credit, is a progressive son of Quality Road that brought $620,000 as a Keeneland weanling and has never taken a backward move in four career starts, his victory in the Bay Area producing an 82 Beyer speed figure that represents an 11 point improvement over his previous career top.

Blackadder, of course, received no points for his El Camino Real victory but he has the proper style for a Classic-type colt, so who knows where he’ll level off? One would think he’d be a candidate to hit the road again next month, with a start in something like the Tampa Bay Derby (March 12) falling nicely on the calendar, but Baffert usually nominates everything to everything, so he’ll have plenty of options.


3 - It was disappointing to learn that Flightline (pictured above) had to be stopped on after incurring what has been described as a strained hock that, while not certainly career threatening, will force him to miss his next intended start in the San Carlos S.-G2 March 5 at Santa Anita.

Flightline is undefeated in three starts by a combined 37 lengths, but so far has been unable to string together any kind of consistent race pattern. After winning his debut last year in April, the son of Tapit returned more than four months later to capture a first-level allowance sprint at Del Mar, then was away again for nearly four months before demolishing his rivals in the Malibu S.-G1 on opening day in late December at Santa Anita.

Where and when he’ll resurface again is anybody’s guess – John Sadler says there is no timetable for the colt’s return – but the trainer also was quoted in DRF as saying “we’re not talking about a big thing.”

Meanwhile, things are just fine with Life Is Good, North America’s “other” big horse in the older division. The dominant winner of the Pegasus World Cup-G1 is being pointed for the $12 million Dubai World Cup-G1 March 26 on a race that also is expected to attract the defending race champion Mishriff. Trainer Todd Pletcher has expressed concern about the deep, sandy, loose main track at Meydan, but we’re going to assume that between now and then the strip will be tightened up to the trainer’s satisfaction.


4 - The old saying, “the first step in fixing a problem is recognizing that you have one,” has been embraced by the Santa Anita racing office, which carded the upcoming Friday’s program with just seven races instead of the usual eight. According to an article by Daily Racing Form’s Steve Andersen, field sizes during the current meeting have been averaging 7.71 runners per turf race and only 6.71 starters on dirt, both categories down approximately one starter from last year despite having basically the same horse inventory of close to 2,000 in-training thoroughbreds at Santa Anita and local training centers such as San Luis Rey Downs and Los Alamitos.

A more creative condition book is being planned, including a shortened turnaround for claiming horses, a two week condition book cycle rather than three, and additional starter allowance races, which always has been popular with horsemen.

These are less drastic steps than the ones this space has advocated for years that include the transformation of the outer Santa Anita dirt track to grass (a la Woodbine) and the inner grass track to all-weather. Preservation of the turf course wouldn’t be an issue if only three days of racing per week are staged as is currently the case and on rainy days those races could easily be transferred to the synthetic.

Morning gallops and workouts would be restricted to the synthetic oval and dirt training track. Less breezing and lighter overall training is a significantly positive by-product of grass/all-weather racing, which is far less taxing than main track events, would allow quicker turnarounds in the entries, and almost certainly would cut down on minor ailments and more serious injuries that take horses out of training.

If the elimination of old school, conventional dirt racing were to be undertaken, you may wonder how this would impact West Coast-based Derby division runners. Our response would be to run those races on the all-weather. Have you seen the field sizes of the local Triple Crown prep events in recent years? Close to 50 percent of all 3-year-old colts nominated to local stakes races this winter have emanated from one barn.

Traditionalists shouldn’t worry that such ideas will be implemented any time soon at The Great Race Place. But, hey, we saw our first L.A. Rams game at the Coliseum in 1958 and they finally won their first Super Bowl on Sunday. Some things just take time.


5 - There are a few subtractions and additions to our weekly Triple Crown rankings that debuted in this space last week. Keep in mind that horses currently trained by Bob Baffert cannot earn qualifying points for the Run for the Roses, but the list assumes that the connections of such runners will find a replacement trainer for the final significant points-generating events that take place four or five weeks prior to the first Saturday in May. Even with zero points prior to one of these final key prep races, a win or a second place finish will be sufficient to gain entrance to the Derby.

This list is based on potential, not resume. Also listed are the odds for Pool 3 of the Kentucky Derby Future Wager, which closed two days ago.

1 – Messier (B. Baffert) – According to the speed figure he earned in the Robert B. Lewis S.-G3, he is currently head-and-shoulders above the other main contenders on the Triple Crown trail. He has no Derby points, but he’ll get them when he needs them, with a temporary trainer change the obvious last-resort solution. Pool 3: 2-1 (field/all others option)

2 – Emmanuel (T. Pletcher) – A strong, powerful son of More Than Ready that has yet to be extended after two very impressive victories, he surely will get tested in his next start, expected to be the Fountain of Youth S.-G2 at Gulfstream Park March 5. Pool 3: 17-1

3 – Smile Happy (K. McPeek) – Despite being a son of sprinter Runhappy, he is perfect in two starts (both around two-turns) while acting like a colt who should handle a classic distance. His win in the highly-productive Kentucky Jockey Club S.-G2 looked good at the time and even better now. Makes his seasonal bow this Saturday in the loaded Risen Star S.-G2 at Fair Grounds. Pool 3: 8-1

4 – White Abarrio (S. Joseph, Jr.) – His only defeat came when third to Smile Happy in the KJC S.-G2 last fall. Remained unbeaten in three starts at Gulfstream Park with his perfect-trip victory in the Holy Bull S.-G3. Likely to be seen next in the Florida Derby-G1 April 2. Pool 3: 18-1

5 – Rattle N Roll (K. McPeek – Concluded his juvenile campaign with a smart maiden win followed by a dominating score in the Breeders’ Futurity, both from off the pace. However, he shows just four breezes so far this winter and none farther than a half mile. Pool 3: 19-1

6 - Classic Causeway (B. Lynch) – Verified the promise shown during his juvenile campaign when cutting out legit fractions and continuing with authority to win the Sam F. Davis S.-G3 in his sophomore debut last weekend. Likely to return in the Tampa Bay Derby-G2 March 12. Pool 3: 13-1

7 – Newgrange (B. Baffert) – Violence colt is three-for-three over three different tracks and at three different distances. Numbers pale in comparison with stable mate Messier but they’re competitive with most of the others. Pool 3: 2-1 (field/all-others option)

8 – Zozos (B. Cox) – Undefeated in two starts, a game maiden sprint win at Fair Grounds in January and then a middle distance allowance pace-stalking score by more than 10 lengths at Oaklawn Park last weekend that produced an 88 Beyer speed figure. The son of Munnings was visually very impressive. Pool 3: 2—1 (field/all others option)

9 – Charge It (T. Pletcher) – Gulfstream Park-based Tapit colt missed by a neck in his sprint debut in January over a one-turn mile and then annihilated maidens at that same trip last weekend by more than eight lengths while never taking a deep breath and earning a 93 Beyer speed figure. Pool 3: 2-1 (field/all others option).

10 – Early Voting (C. Brown) – Undefeated in two starts, a maiden win and a dominating score in the nine-furlong Withers over the deeper-than-quicksand main track at Aqueduct. We suspect he is much better than his modest figures indicate. He’d better be. Pool 3: 19-1

11 – Forbidden Kingdom (R. Mandella) – If there is a colt out West that is quicker and can get in front of Messier over a distance of ground, it’s him. Loved his San Vicente S.-G2 score over seven furlongs. The question is, how far can this son of American Pharoah run? Pool 3: 18-1

12 – Zandon (C. Brown) – Won his debut sprinting and then was unlucky when nosed out in the Remsen S.-G2 over nine furlongs. He’s a bit of a grinder but will run all day and shows a steady, healthy, recent work pattern leading into Saturday’s Risen Star S.-G2. Pool 3: 21-1

13 – Mo Donegal (T. Pletcher) – Didn’t get the best of runs when rallying too late to be third in the Holy Bull S.-G3. Lacks a great turn of foot but has no distance limitations. Pool 3: 23-1

14 – Major General (T. Pletcher) – Two-for-two as a juvenile, including the Iroquois S.-G3 at Churchill Downs. How much progress has he made over the winter? Recent Palm Beach Downs team workout scored low on the goose-bump scale. Pool 3: 32-1

Knocking on the Door: