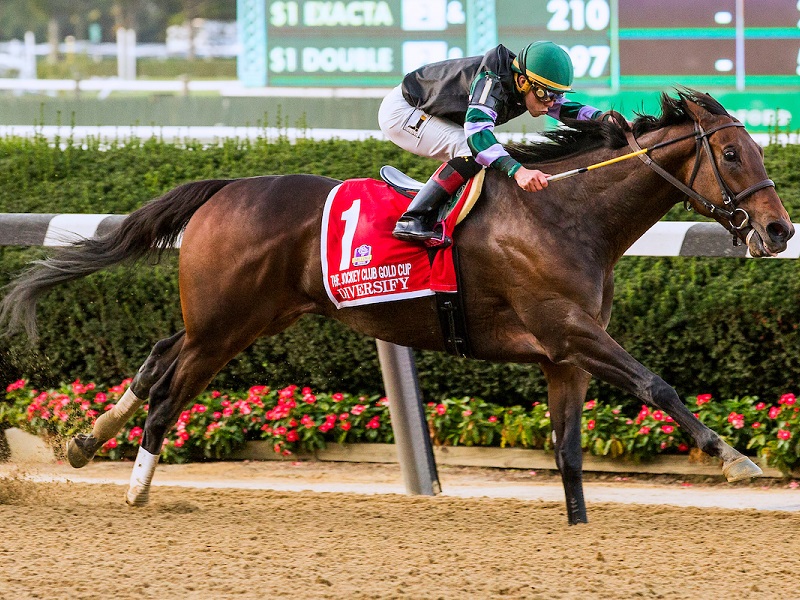 With the last weekend’s final round of Breeders’ Cup preps in the rearview mirror, the heavy lifting for Breeders’ Cup XXXIV is over, and as that is left is to get to Del Mar safely. With that in mind, let’s take a look at the 13 “Win and You’re In” automatic qualifiers for the Breeders’ Cup that were run around the country last weekend.

Let’s just say this wasn’t your dad’s Gold Cup, which was pretty apparent when KEEN ICE was a legitimate heavy favorite. And while that deep closer made his patented late run to be 2nd, it was the unheralded New York-bred DIVERSIFY who forgot to stop up front and posted the mild surprise. The winner had never won a graded stakes—let alone run in one—so that about says it all. And even though he walked on a loose and lonely lead, he still ran slow, in terms of speed figures. The best horse going forward will be third-place finisher PAVEL, but the fact he’s moving on to the Breeders’ Cup Classic is a “way too much, too soon” kind of thing. Here’s hoping he gets through it in one piece, as I’d love to have a 2018 Horse of the Year future book bet on him. Quality: D

The quality of the Spinster has suffered greatly in recent years, and this one was no different, as ROMANTIC VISION feasted on over a very weak group on a sloppy track. It’s expected she’ll move on to the Breeders’ Cup Distaff, but it’s tough to think she’s any kind of major player, as she loves Keeneland (3-for-4 now) and her claim to fame before this was a win in Churchill Downs’ Locust Grove (GIII). No one else in this field needs to be taken seriously, and none of them will likely be in the Distaff or any other Breeders’ Cup race anyway. Quality: D-

A deep and competitive Shadwell group lined up, which is why six of them were separated by a little more than 2 lengths on the line, with the relative longshot SUEDOIS (FR) getting up over pacesetter HEART TO HEART, with BALLAGH ROCKS close in 3rd. The winner traded blows with some heavyweight milers in Europe last year and held his own, while never winning, but he did enter off his biggest career win in the relatively minor Boomerang (GII) at Leopardstown. The thing of note here is that he added Lasix in the Shadwell, and we all know what that can do to a horse. He also may have caught the right year to run in the Breeders’ Cup Mile, as our best, World Approval, isn’t being confused with Wise Dan or Tepin, and their best, Ribchester, is no guarantee to come. I can’t really consider Heart to Heart, Ballagh Rocks, or 4th-6th place finishers DIVISIDERO, MONDIALISTE (IRE) or MISS TEMPLE CITY legitimate Mile win threats, though if any of them hit the board I wouldn’t be shocked either. Quality: B-

Only six lined up, but DACITA (CHI), GRAND JETE (GB) and ZHUKOVA (IRE) are all legitimate threats on their best day to win the Breeders’ Cup Filly & Mare Turf. The problem is, they ran 2-3-6, respectively, while the complete second-tier WAR FLAG scored a head victory. To be fair, the winner was very lightly raced and improving, but going in, it seemed a bit implausible one of the top-3 wasn’t going to win. Of course, with all that being said, only Zhukova ran poorly, and that’s due in large part to the fact she didn’t get the soggy turf she loves and needs to run their best. I really don’t know what to make of the winner, but I have a lot of respect for the two gals she vanquished, so I think she needs to be viewed as a playable longshot in the Filly & Mare Turf. The issue is she’ll be going up against Lady Eli and some potential real tigers from Europe, so it’s tough to think she’s a true win contender. Dacita and Grand Jete are legitimate grade I performers, but the (highly disappointing) cutback to 1 1/8 miles in the Filly & Mare Turf really hurts their chances. Quality: B+

Much like the Flower Bowl, the First Lady was thought to be a good one coming in, yet it was rank outsider ZIPESSA who earned the berth into the Breeders’ Cup Filly & Mare Turf that went with her win. That puts things into a different light, though the race was run in (reverse) merry-go-round-fashion, as pacesetter and second-place finisher HAWKSMOOR (IRE) led the entire way before being passed by Zipessa. I’d actually rate the latter a better Filly & Mare win contender, since 1-mile was a bit too sharp for her, though I think that’s a bit of a stretch too. Behind her was the accomplished, though underachieving ROCA ROJO (IRE), which is a reputation fourth-place finisher DONA BRUJA (ARG) is getting too. It’s now readily apparent that 5th-place finisher DICKINSON is way over the top and will never regain the form she displayed when beating Lady Eli locally in the Jenny Wiley (GI) in April. So, now it’s fair to ask yourself just how good this field really was? Quality: B-

ROY H won a berth into the Breeders’ Cup Sprint and he once again showed that he’s good enough and fast enough to win it, as he beat a darn good field filled with several who not only have Sprint aspirations, but Breeders’ Cup Dirt Mile ones too. Both 2nd-place finisher MR. HINX and 3rd-place finisher AMERICAN ANTHEM are legitimate graded stakes horses, while 4th-place finisher RANSOM THE MOON already qualified for the Sprint when he beat Roy H in the Bing Crosby (GI) at Del Mar, and 5th-place finisher GIANT EXPECTATIONS already qualified for the Dirt Mile when he won Del Mar’s Pat O’Brien (GII). That’s a lot of good things going on, so the fact Roy H was a comfortable 1-length winner says you better give him a long look at Del Mar.  Quality: A-

Conversely to the SA Sprint Championship, WHITMORE beat a very subpar field to earn his Breeders’ Cup Sprint bid, and he did in in desperation mode too, as he was up in the shadow of the wire to beat AWESOME BANNER by a nose. And yes, that is the same Awesome Banner who has now lost 10 straight. If nothing else, Whitmore has shown he can passes horses in the lane and you know he’ll get a hot pace to rally into at Del Mar, but it’s tough to think he can do anything else but be a tri-kicker in the sprint. Awesome Banner is rumored to be a Sprint candidate too, but he’ll do nothing more than add gasoline to an already hot pace fire. The rest of the Phoenix field, with the exception of third-place finisher FLIMOUSINE LIBERAL (who will not move on to the Sprint), was extremely weak and are not Sprint types. Quality: D

FINLEY’SLUCKYCHARM did what was to be expected, as she beat a field she laid over on paper, but the noteworthy part is she did it showing a newfound rating gear, as opposed to the speedy style she’s used to winning with. Again, she beat nothing and no one here is a player in the Breeders’ Cup Filly & Mare Sprint Finley’sluckycharm earned a berth in with her win, but being able to settle and pass horses is never a bad thing. The worry here is that the Filly & Mare Sprint is at 7 furlongs, which is likely going to stretch her rubber band mighty thins, and she’s done her best work at 6 furlongs. Quality: C

These 2yo races are tricky, as a they are usually made up of horses with lots of potential, but little to actually show for it, but FIRENZE FIRE, who qualified for the Breeders’ Cup Juvenile with his half-length win over maiden GOOD MAGIC, impressed with a prolonged, wide move that swept him to victory. Yes, I know he beat a maiden, but Good Magic was considered Chad Brown’s best 2yo at Saratoga, and he ran huge in defeat and is a name you need to remember. And Godolphin’s 3rd-place finisher ENTICED is bred in the purple and is another who could make major waves at 3, so I’m thinking this was a really sharp field. And Firenze Fire is now 3-for-4 and beat Free Drop Billy at Saratoga too, so he’s a legitimate 2yo. The rub is that he’ll be making his two-turn debut in the Juvenile, and coming up against a potential freak in Bolt d’Oro. Quality: B+

The aforementioned FREE DROP BILLY got his two turns and, as expected, relished it when he beat a meek group to qualify for the Breeders’ Cup Juvenile. He did it in painfully slow time too, in terms of speed figures, though he did win by an easy 4 lengths over BRAVAZO, who excited a very, very slow MSW win at Churchill Downs. There’s more too, and it’s sad, as TEN CITY, who had surged to the lead off the far turn, broke down immediately thereafter. Free Drop Billy may well have still won, but it certainly wouldn’t have been as easily, or impressively, which clouds his showing even more. He’s also at a big tactical edge at Del Mar, which probably isn’t a track you want to be spotting horses 8-10 lengths over, especially when one of them is named Bolt d’Oro. The rest of the Breeders’ Futurity field was made up of also-ran types, and the fact huge longshot Bravazo was clear of them all doesn’t bode well for the rest going forward. Quality: C-

I’ve also thought SEPARATIONOFPOWERS was a bit overrated, but at least she won her berth into the Breeders’ Cup Juvenile Fillies the right way, while showing a rating gear too, which will help her try and get two turns for the first time at Del Mar. The problem is she beat a wretched field, as runner-up CALEDONIA ROAD, who was 3 ½ lengths behind, was only a maiden winner who isn’t expected to move on to Del Mar, which makes 3rd-place finisher MAYA MALIBU the only potential filly to forge ahead. And after her weak run, it’s pretty obvious her 2nd, when she beat Separationofpowers in Saratoga’s Spinaway (GI) last time, was a simply byproduct of a pace meltdown. Separationofpowers is improving and she’s in the potent hands of Chad Brown, but I’m not sure that’s enough to give Moonshine Memories, Alluring or Heavenly Love (see below) a scare. Quality: C+

The aforementioned HEAVENLY LOVE beat absolutely nothing here to secure a berth into the Breeders’ Cup Juvenile Fillies, but yikes, she sure did it with aplomb in her two-turn debut, as she drilled an overmatched field by a “name the score” type of 5 ½ lengths. PRINCESS WARRIOR was 2nd (someone had to be), and will reportedly move on to Del Mar with the winner, but it was visually apparent these are two vast different horses and the winner is in another league. Moonshine Memories and Alluring represent a much bigger hurdle, and they won’t take their ball of go home like this field did when Heavenly Love came to them entering the far turn, but she’s a legitimate win threat in the Juvenile Fillies. Quality: B-

This one awarded a berth into the Breeders’ Cup Juvenile Turf, even though it was run over a very sloppy main track, so it’s tough to get a feel for it, especially since the winner, FLAMEAWAY, has already shown he loves an off-track. He’ll take the berth and move on to Del Mar, but it’s best to hold all judgement here, as this was a total crapshoot. Quality: N/A