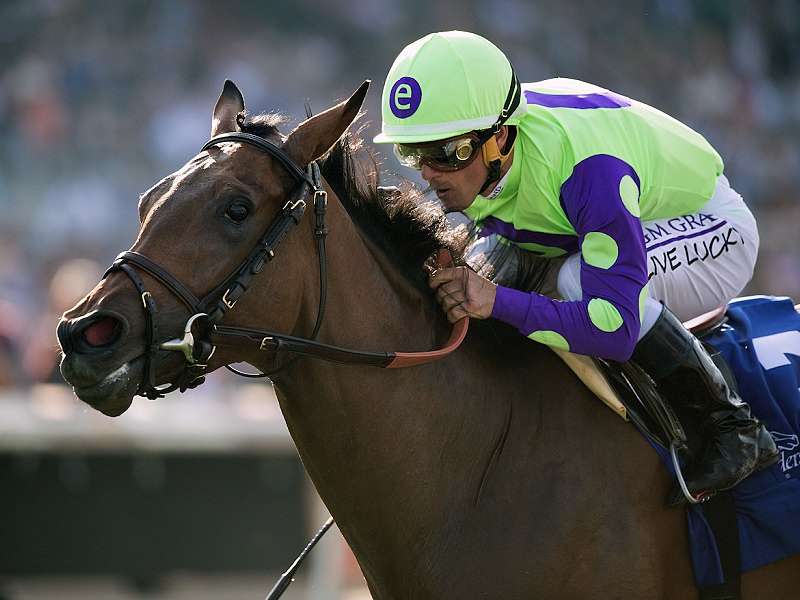 Saturday’s feature at Keeneland is the G1 Queen Elizabeth II Stakes for three-year-old fillies on the lawn, and quite frankly I’m not certain the fine folks at Keeneland could’ve done a better job in assembling this star-studded field.  They’ve attracted the best runners from New York and California, as well as a duo from Europe, to compete for the race’s $500,000 purse.  Bet Keeneland beginning at 1:00PM ET on Saturday and be sure to check out the QEII, which goes as Race 9, at 5:30PM ET.

Need some help handicapping?  Here’s my horse-by-horse analysis, as well as my suggested wagers for Saturday’s card.

While Con Te Partiro may be light on credentials, you have to respect any horse that Mike Smith ships into ride, especially when it’s a filly who won a race at Royal Ascot earlier this year.  Con Te Partiro is 2-for-6 on the lawn and closed like a rocket last out to finish 4th in the G1 Del Mar Oaks.  Problem is, the 1-2-3 finishers that day are back here as well, as are several other high profile fillies.  It’s tough to envision this one getting anything more than a minor share, if even that.

Daughter of Ghostzapper has won 4-of-8 lifetime, including two straight graded races.  She beat Uni last out in the G2 Lake Placid and is simply a better filly than she was when La Coronel beat her in back-to-back starts earlier this year.  Her record at the distance is strong (3-for-3 in the Exacta), but I’m worried about Corey Lanerie’s numbers on the Keeneland turf course.  He’s just 11-for-137 (8%) since 2015, and is only in the Trifecta 29%.  That’s stark contrast to his Keeneland dirt numbers in that span – 19% winners and 48% in the Trifecta.  Note that Javier Castellano gets off her to ride New Money Honey.

Cruised last out in the Dueling Ground Oaks at Kentucky Downs, but that was a weak field and broke a 8-race losing streak for this filly.  That day’s jockey, Julien Leparoux, abandons ship to ride Dream Dancing and Robby Albarado has yet to win aboard this one.   She finished behind New Money Honey and Uni in the Belmont Oaks in July and it’s hard to envision her form has flipped that much.  As a rule of thumb, take big speed figures earned at Kentucky Downs with a grain of salt.  It’s a unique course and form there often does not replicate to more traditional courses.

She lost four straight races from April through July against fillies she faces today (La Coronel, Proctor’s Ledge and New Money Honey), but shipped to California and closed late to get up and win the G1 Del Mar Oaks.  So the question is, did she take a big step forward in winning the ‘Oaks, or was it just a subpar field.  I’m leaning to the latter.  I do like that Julien Leparoux sticks with her, and he certainly knows his way to the winner’s circle, so consider her for your ‘deeper’ bets.

One of two European imports, she won the G2 German 1,000 Guineas at Dusseldorf in June for conditioner Hector Palmer.  In her lone G1 try, she was 6th, beaten 10 ¾-lengths, in the British 1,000 Guineas at Newmarket, but she raced against the likes of Winter and Rhododendron that day.  Ultimately she’s a solid filly with decent credentials and many of these are.  I can’t use them all, so she’s ‘out’.

She was arguably the best of the two-year-old fillies last year, despite a loss in the G1 Breeders’ Cup Juvenile Fillies Turf.  In the Breeders’ Cup she was saddled with an impossible outside post (13 of 14) and had to drop far back before rallying.  She reeled off two wins this Spring, but a trip to Royal Ascot (5th in the G1 Coronation Stakes) seems to have dulled her form.  She ran better last out in the G2 Sands Point and she has tactical speed in a race void of it.  She’s 2-for-2 at Keeneland and is absolutely an Exacta threat, even if today’s distance is a bit beyond her best.

The connections are world class and so is her form.  She’s raced against the likes of Winter, Roly Poly, Hydrangea and Rhododendron and has never been disgraced.   Furthermore, she won a G1 at Chantilly last October and if she fires her best, she’s going to have chance at pulling an upset.  She’ll appreciate harder ground in the US – her three Exacta finishes came on ground listed as Firm or Good/Firm, so look for her to be prevalent throughout.

California invader was third last out in the G1 Del Mar Oaks as the favorite, an honor bestowed upon her as a result of her 21/1 upset in the G2 San Clemente two starts back.  Unfortunately, she appears to be somewhat pace dependent and the fillies she’s chasing today are just better than the group she’s been taking on in California.  Pass.

I think this California-based filly tipped her hand two back in the G1 Belmont Oaks when she finished 6th, beaten 3 ¼-lengths by New Money Honey.  That broke a streak of four straight Exacta finishes in California (a streak she would continue when second in the G1 Del Mar Oaks).  If you’re sensing a theme here, this group of California turf fillies isn’t that good, as evidenced by the fact that Dream Dancing (a second-tier Eastern horse) stole the ‘Oaks and that they haven’t traveled well.  This is the best of them, but she’s not good enough.

Her backers were relieved when she got up in the shadow of the wire to reel in La Coronel in the G2 Sands Point at Saratoga and if you go three back, she was third behind New Money  Honey in the G1 Belmont Oaks.  She continues to improve, but today’s outside draw may be an issue considering she lacks early pace.  She’s only missed the Trifecta once in nine starts, so she should be in the picture.

Can’t blame them for trying the dirt with her last out in the G1 Alabama, but put a line through the race.  This one seems to have it all – talent, tactical speed and the right trainer (Chad Brown) – to get the job done Saturday.  She won the Breeders’ Cup Juvenile Fillies Turf and won the G1 Belmont Oaks in July.  This race is a logical spot for her and you have to think the connections will have her fully cranked for this prestigious G1.