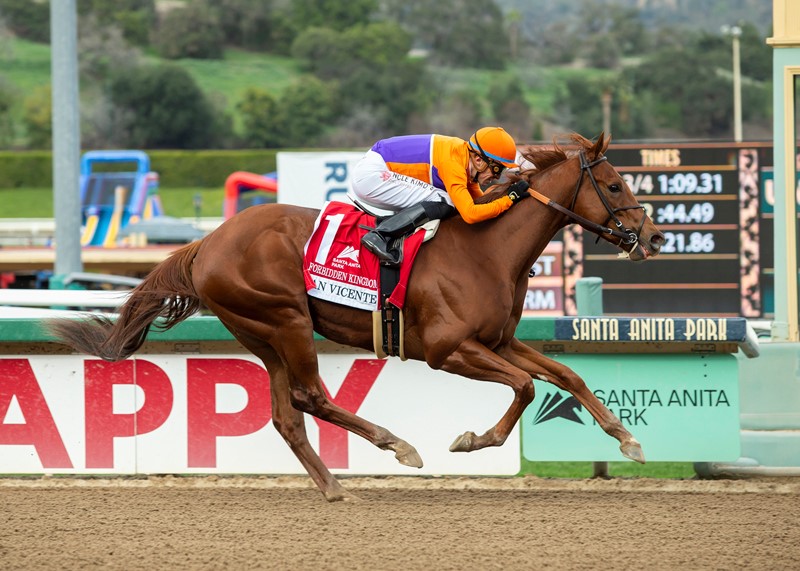 We dial in your daily guide to 1/ST BET and Xpressbet promotions, along with pertinent handicapping hints as you plan your attack. Saturday's 11-race Santa Anita Park card is co-host to the inaugural 1/ST Saturday in March, which also joins key stakes races at Gulfstream Park in featured pick five wagers.

Handicapping Hint: 13 entered in what might be considered another chaotic turf sprint. But Gold Phoenix figures a solid favorite off a troubled, narrow defeat in his US unveiling for Flavien Prat and Phil D’Amato. Prat is winning 42% with favorites at the meet. Once you get past that contender, the rest look very similar, thus, creating a classic ‘single or spread’ situation in the multi-race bets.

Handicapping Hint: 7 entered, but there’s but a single past performance line among the entire field. XBTV’s free video workout library is a must for this event. $1.7 million purchase Taiba drilled a furlong in :10-1/5 last March to lure a big pricetag and the Bob Baffert trainee will take a ton of money on the tote. Baffert and John Velazquez are 15: 11-1-1 at the meet when favored. It’s likely that simple.

Handicapping Hint: 8 entered and favorites have won 43% at the meet in turf sprints with fields of 8 or less. There’s less traffic and pace pressure the smaller the field, allowing the best horse to shine. This race doesn’t have an obvious favorite on paper.

Handicapping Hint: 11 entered with west coast distaff turf stalwarts Going to Vegas and Mucho Unusual both cutting back in distance. The latter was runner-up in this race a year ago. Canooding comes off a 22-1 upset in the G3 Megahertz on Jan. 29, indicating this local division’s volatility. Keeper of Time comes west from Gulfstream to try and take advantage.

Handicapping Hint: 7 entered, featuring the brilliantly fast sprinter Forbidden Kingdom in his first route attempt. Stablemates Armagnac and Doppelganger have been morning workmates and worthy of a video review free at XBTV.com. Cabo Spirit was second-best in the G2 Lewis last out behind Messier, who bypasses this race and awaits the Santa Anita Derby by design. Anything beyond this quartet would trigger huge payoffs intra-race and in the multi-race wagers.

Handicapping Hint: 9 entered with only 3 first-time starters, so it’s a group with some form to evaluate. Got Thunder has been beaten favorite at 9-5, 3-5 and 2-5 in his 3 dirt starts and will give turf a go. He is going to be a massive favorite again and the focus of many singles in multi-race bets. If you can find a successful alternative, you will be rewarded.

Handicapping Hint: 13 entered in a fillies and mares version of today’s opening Santa Anita race. This one re-matches multiple horses from Jan. 2 and Jan. 23 races at Santa Anita, thus making for a race where video replay study should be exercised. Honey Jar was beaten favorite in the most recent of those races and probably goes favored again, though vulnerable.

Handicapping Hint: 6 entered, led by As Time Goes By, who won the G3 La Canada in preparation for this by more than 13 lengths. She was second in this race last year to the star East/Midwest filly Swiss Skydiver, whose trainer Kenny McPeek will try for a return strike via Envoutante this time. The Beholder Mile should run through these two. Wildcard G1-winning juvenile of 2020 Varda returns from 15 months on the sidelines.

Handicapping Hint: 12 entered, an extremely familiar cast of turf milers that collectively dance nearly all the dances and take turns. Space Traveler, Flavius and Tell Your Daddy travel west to add to the already difficult puzzle. Pre-race looks may be the separator as to whom is ready to rock on this day, so pay attention to any visual clues. This is the kind of race you could be 5-deep in multi-race bets and still popping antacids until it is posted ‘official.’

Handicapping Hint: 8 entered the Big ‘Cap and its clear the locals this winter are led by Express Train, winner of the G2 San Antonio and G3 San Pasqual as he tried to one-up his second-place finish in this race from 2021. Stilleto Boy has faced the very best horses of the past year in his last 4 starts – Medina Spirit, Knicks Go, Flightline and Life Is Good the winners in that fabulous group. Eastern transplant Why Why Paul Why and New Orleans-based Warrant for Brad Cox are the wildcards. Only of these 8 have tried the 1-1/4 miles distance, combining for a 5: 0-1-1 record. Find the final-furlong survivor.