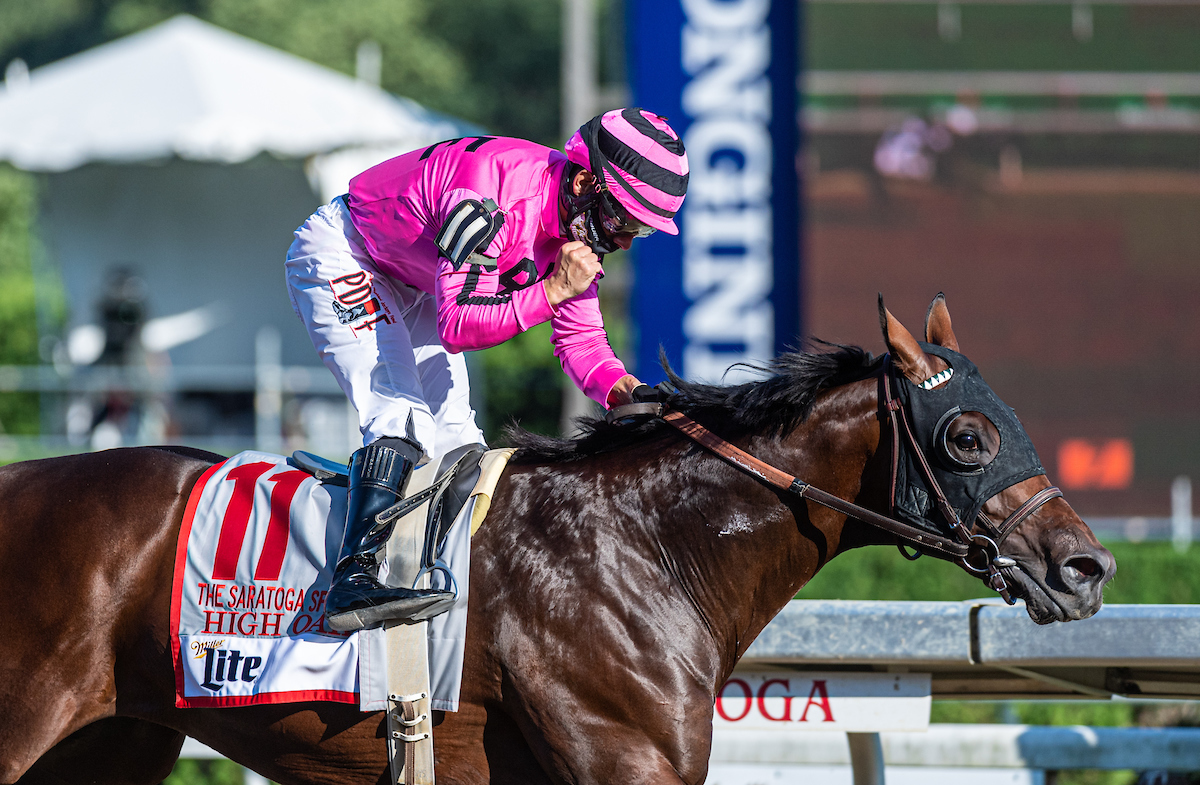 The Coast-to-Coast Dirt Pick 5 features four Grade II stakes and the Grade I Santa Anita Handicap to close the sequence. Total purse money for the five races is $1.875 million. A winning $1 wager on the Dirt Pick 5 could also produce a blockbuster payout with 44 entrants in the five races and a low 12% wager takeout. Here’s an early look at the action:

Leg A (Santa Anita, race 4, 4:28 EST) -- SHOOTERS SHOOT settled into a 3-wide stalking trip after he was crowded between rivals early in the G-III Palos Verdes at 6F. He ranged up into a contested pace for the stretch drive, made a run at the stubborn 9-to-5 winner and earned the top speed figure of his career by finishing second by a neck. He gets ample pace to run at in the G-II San Carlos today and an extra furlong to cover in his second start off the claim. CEZANNE finished 2-3/4 lengths behind Shooters Shoot off a nine-month layoff. He was put to a drive on the turn and no serious threat as the odds-on favorite, but the lightly-raced 5-year-old finished well. He won a 6-1/2F, G-III stakes in his only start last year, running away from speedball BRICKYARD RIDE, who starts from the rail in his San Carlos title defense.

LEG B (Gulfstream Park, race 10, 4:40 EST) -- SPEAKER’S CORNER set a faster pace than it visually appeared in the hand-timed, G-III Fred Hooper Stakes at one mile. He came under siege on the turn, but dug in resiliently to hold off late-running FEARLESS, a multiple graded stakes winner and proven miler. COLLABORATE caught the eye in a 6-1/2F allowance victory off a five-month layoff. He was blocked behind a wall of horses before exploding through a seam in early stretch to win going away in mid-track.

LEG C (Santa Anita, race 6, 5:30 EST) -- FORBIDDEN KINGDOM, troubled at the start in both 2-year-old stakes tries last year, ran to his workouts and sped off to a clean, 7F victory in the G-II San Vicente in his seasonal debut. Trainer Richard Mandella excels on the sprint-to-route and second-off-the-layoff angles. No one else in the G-II San Felipe field has won a stakes on the main track, but DOPPELGANGER was favored against Forbidden Kingdom after an impressive debut win and has fired three bullet workouts since then. His stablemate, ARMAGNAC, is the only entrant to win at today’s distance, going wire-to-wire with first-time Lasix. WORSE READ SANCHEZ showed marked improvement with blinkers on the turf, albeit in state-bred competition, and makes the ticket at 20-1 on the morning line.

LEG D (Gulfstream Park, race 12, 5:42 EST) -- On January 28, HIGH OAK was 150-1 at a major Las Vegas sportsbook to win the Kentucky Derby; today, he is 27-1, with only 10 runners at lower odds. Someone likes what they’ve seen, so follow the money as High Oak, one of two graded stakes winners in today’s Fountain Of Youth Stakes, makes his seasonal debut. RATTLE AND ROLL did just that when last seen winning the G-I Breeders Futurity at Keeneland, saving ground to the final turn and inhaling the leaders with a 4-wide sweep to command at today’s distance.

LEG E (Santa Anita, race 11, 8:00 EST) -- WARRANT was unraced as a 2-year-old, but the now 4-year-old multiple stakes winner has progressed steadily for Eclipse Award-winning trainer Brad Cox. He was no match for multi-millionaire Mandaloun and five-time, Grade I-placed Midnight Bourbon in the Grade III Louisiana Stakes January 22 at the Fair Grounds, but he is a major player with continued improvement and the track’s leading jockey, Flavien Prat, summoned to ride. EXPRESS TRAIN held a clear stretch lead in last year’s Big ‘Cap but settled for second, beaten a half-length. He added two more Grade II victories at Santa Anita to his resume since then, including a nose victory over G-I winner Hot Rod Charlie (4-14, $2.7 million) in the San Antonio Stakes. Looking for a longshot? Look no farther than WHY WHY PAUL WHY, who won 5 of 6 route races at Parx by a combined 24-1/2 lengths in the second half of last year and finished second in the 1-1/8-mile Jazil Stakes at Aqueduct, earning his fourth, 90-plus Beyer speed rating in his last five starts. His enters the barn of California-based trainer Michael McCarthy and is worth a price shot in his biggest class test to date.