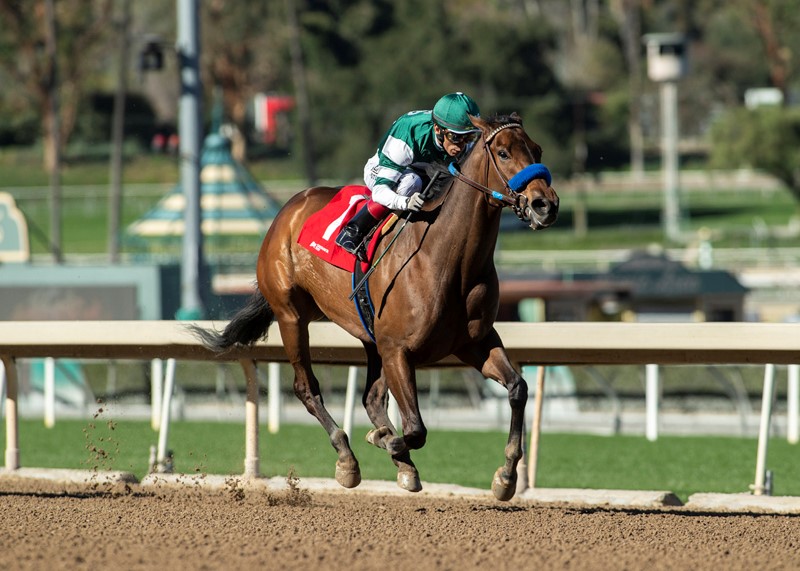 Forecast: Edgeway (TOC=3/5; ML=4/5) -- pictured above -- finished second in the Breeders’ Cup Filly & Mare Sprint-G1 two races back and then easily defeated subsequent Santa Monica S.-G2 winner Merneith in the listed Kalookan Queen S. in early January. The J. Sadler-trained mare is a perfect two-for-two over the Santa Anita main track and has won six of 10 overall. Additionally, she has proven winning form off a layoff and her works are outstanding. It all adds up to a logical short-priced rolling exotic single in a race that we’ll otherwise pass.

Forecast: This restricted (nw-2) $25,000 claimer for older horses drew just five runners. Allaboutthemoney (TOC=7/5; ML=9/5) finally graduated in a bottom-rung affair in his eighth career start last September and then disappeared. He returns waiver protected for the blazingly hot V. Cerin barn with a steady series of workouts that should have him fit and ready. On pure numbers, he’s fast enough to win, assuming he returns as well as he left. We’ll use him as a rolling exotic single and in the win pool at or near his morning line of 9/5.

Forecast: Four of the seven entrants in this starter optional claimer for 3-year-olds exit the same race February 19 that was won by Con on the Run. It was a strong heat for the level, so it would not be surprising to see the winner of this event come from that group. Clampett (TOC=8/5; ML=3-1) has rising speed figures and earned a career top when second in that sprint, and nothing more will be needed to land the M. Glatt-trained colt in the winner’s circle. It seems probable, based on our pace projections, that the son of Flatter will be on the lead or in a comfortable stalking position outside, and in either case he should have every chance to seal the deal. Arrabiata ((TOC=2-1; ML=5/2) appears to have found a home on turf. He earned a career top speed figure when third over a mile last time out and showed he could sprint when graduating at first asking from far off the pace at Los Alamitos in his debut.

Forecast: Here’s another five-runner event, a starter optional claiming main track miler for fillies and mares. With This Vow (TOC=3-1; ML=5/2) stretches out for the first time, and as a daughter of Broken Vow certainly has the pedigree to handle two-turns, especially in her career first try after three recent sprints to sharpen her speed. She seems certain to inherit the role as the controlling speed, and in a race with suspect closers the R. Ellis-trained mare should have every chance to dominate from gate to wire. With the positive jockey switch to A. Cedilllo, she looks solid in the win pool and in the various rolling exotics at or near her morning line of 5/2.

Forecast: Bottom rung maiden claimers meet over a mile in the first leg of the late Pick-4, with Thrive having the distinction of being something in a nothing race. The M. McCarthy-trained gelding obviously is being culled from the stable after a series of money-burning performances in much tougher straight maiden events, so against this group the son of Competitive Edge should make the running and never look back. However, he offers no value at 6/5 on the morning line, so as untrustworthy as he’s been in five previous starts you can use him as a rolling exotic single or better yet just pass the race.

Forecast: Second-level allowance fillies and mares sprint down the Hillside course in a race with two major players. Royal Address (TOC=2-1: ML=2-1) finished a strong runner-up over this course and distance vs. similar last time out and repeat of that race today probably will be good enough. She’s yet to record her first North American victory but today could be her day if she receives the patient ride that she apparently prefers. Big Sweep (TOC=7/2; ML=5/2) is a little light in the speed figure department, but she’s certainly bred for grass (Mr. Big) and only has one prior start on the lawn, and that was around two turns. She has good tactical speed and room for improvement, and after winning an optional claimer on dirt last month she’s tackles tougher while retaining F. Prat. Both should be included in rolling exotic play with the preference on top to Royal Address.

Forecast: State-bred maiden $50,000 claimers sprint six furlongs, with the second-time starter Smiling Goodbye likely to step forward after flashing speed and before weakening late when winding up fourth in his debut vs. similar in mid-January. The D. Pederson-trained gelding retains A. Cedillo, shows a healthy work pattern since raced, and probably has more room for improvement than the other logical contenders. At 4-1 on the morning line, he offers a bit of a gamble. Forgotten Ways outran his 13-1 odds when finishing second vs. maiden $25,000 foes last month and is another that could improve in his second career start. We’ll take the raise in class as a sign of confidence. Arthur Spooner, beaten a nose in the same race Smiling Goodbye exits, was making his eighth career start, so he is what he is. V. Espinoza knows him well and stays aboard.

Forecast: The nightcap is a maiden turf sprint for fillies and mares that offers three possibilities. Vivando ran well in her debut when overcoming a slow break from the rail to finish a solid runner-up in a race that earned a solid number, so with that bit of experience behind her the daughter of Twirling Candy has a right to step forward. Also, the J. Sadler barn has superb stats (28%) with this second-time starter angle. Scenic Masterpiece also displayed promise in her debut when finishing third after a tardy break, and like our top pick seems likely to produce a significant forward move for the J. Wong barn, which does well with second time starting maidens (20%). Countess Rosina is a dangerous European import form the J. Mullins barn and. Second at 66-1 in her only start last summer in a good maiden juvenile affair at Newmarket in England, she attracts F. Prat, is comfortably drawn outside, and shows a moderate but steady main track work tab that should have her fit enough.