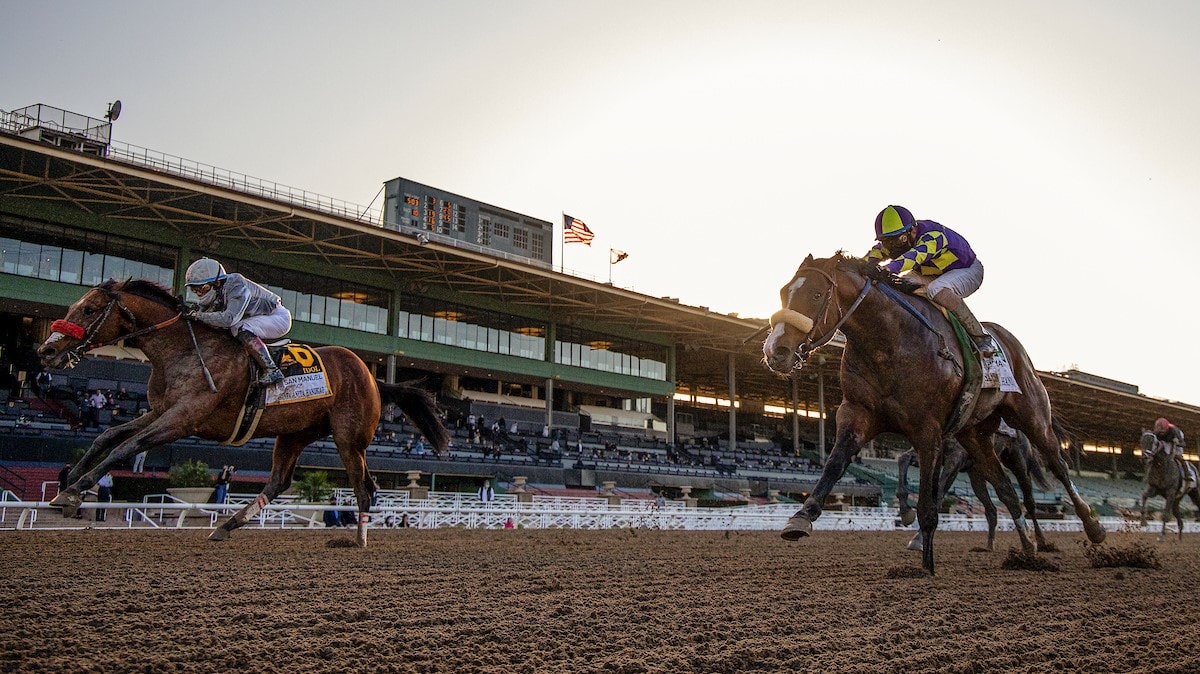 Forecast: Barrister’s Ride was given an educational run sprinting in her debut last month and should benefit greatly from the experience. The daughter of Clubhouse Ride was off slowly and allowed to settle, picked it outside entering the turn and then stayed on nicely through the lane to finish sixth (beaten seven lengths) before galloping out with good energy. In an unusually strong race that already has proven to be productive. She stretches out to nine furlongs today in a below average race for Cal-breds, so while we would have preferred to have seen another race going short before trying two turns, the C. Gaines-trained filly may have enough natural talent to win, anyway. She is listed at 6-1 on the morning line, and at that price might be worth a bit of a gamble. She’s a Bit Sassy established the pace but was worn down late when finishing a solid runner-up at this level over a mile while earning an okay number last time out in her fourth career start. Similar front running tactics are likely to be employed, and if she can clear without pressure the daughter of Mr. Big could take this field a very long way. We’ll prefer the filly with the higher upside – Barrister’s Ride – on top but include both in our rolling exotics.

Forecast: Storminside (TOC=3/5; ML=6/5) is a tough old pro with 21 first or second place finishes from 47 career starts and with recent speed figures that make him the one to beat in this abbreviated dash for $10,000 older claimers. Likely to be the controlling speed, the J. Wong-trained gelding gets a weight break with the switch to bug boy D. Herrera and under these conditions should be tough to catch. Speed Pass (TOC=2-1; ML=9/5) projects to draft into an ideal stalking position outside and have dead aim and every chance from the quarter pole home. A confidence-building win at Los Alamitos in a mixed-breed race last month should serve him well, and the ex-classer, who was graded stakes placed in New York just over a year ago, could climb back up the ladder based on his recent Orange County form. Both should be used in rolling exotic play with preference on top to Storminside.

Forecast: Bye Bye Bertie (TOC=3/5; ML=8/5) just won a similar starter’s allowance turf affair for fillies and mares over a nine furlongs in dominating fashion and should be capable of winning right back despite today’s longer mile and one-quarter trip. She’s genuine, versatile, and capable of winning on the lead as the controlling speed or by rallying from off the pace, so regular jockey V. Espinoza can assess the early pace flow and then pick a suitable strategy. A winner of 10 races from 22 starts, the daughter of Alternation is listed as the 8/5 morning line favorite but seems certain to go lower in a race that offers no solid second choice, so we’ll make her a logical short-priced, rolling exotic single but otherwise pass the race.

Forecast: Marie (TOC=4/5; ML=8/5) returned off a long layoff to toy with a modest bottom-rung field of maiden fillies and mares last month and today goes from J. Sadler to G. Pappaprodromou following a $20,000 claim. The five year old daughter of Blame obviously has her issues, and with her new connections raising her just one level in class (and clearly not caring if they lose her), her current conditions must be considered suspect. That said, if she has at least one good one left, she could easily win right back. Red Panty Night (TOC=4-1; ML=5/2) is the one to fear most. Arguably a tad quicker early than Marie, she earned a speed figure two races back that is better that was Marie achieved in her score, and with two easy breezes since raced, the K. Mulhall-trained filly might be a little easier to trust. We’ll try to get by using just these two in rolling exotic play, with a very slight edge on top to Red Panty Night.

Forecast: The first leg of the late Pick-4 is a wide-open turf sprint for older maidens that requires as much coverage as you can afford. We’ll go four deep and hope that’s enough. Mubtadaa makes his California debut for red-hot trainer V. Cerin as a first-time gelding, and recent workouts indicate he’s fit for a good try off a six month layoff. The son of War Front earned speed figures in New York that make him a major player against this group for a barn that has superior stats with layoff runners, and if he breaks running from the rail, he should find himself on or near the lead throughout. Trainer Please can dish out early heat and has finished in the frame in four of five career starts, but he’s yet to show any ability to finish under pressure, losing ground from the furlong pole to the wire in each of his five career starts. This will be his third start off a layoff, so perhaps the son of Orb can move forward just a bit. Famous Star has trained okay for J. Sadler (a solid 21% with debut runners) and has trained like he’s fit enough to produce a good effort first crack out of the box. We doubt he’s a world beater but won’t have to be against this ground, and he’s sure to get plenty of play with F. Prat taking the call. Take Action is another that has shown a bit of ability in the a.m. and is bred for grass on both sides of his pedigree. At 6-1 on the morning line, he’s worth tossing in somewhere.

Mubtadaa (February 14, Santa Anita, 4f, :49.3h TT). Grade: B-
Caught a glimpse of this gelding in a training track breeze last month with Farquhar (same time) for new trainer V. Cerin, and the son of War Front looked quite sharp and eager while coming the final quarter of a mile in :24.4 under a hammerlock. Eastern invader has been gelded since arriving in the West and could easily be a better type on this circuit. Numbers are decent and he’s still eligible to face maidens for a hot trainer.
View Workout Video

Famous Star (March 12, Santa Anita, 5f, :59.4h). Grade: B
Worked inside maiden claimer Wall Street Trader (same time) for J. Sadler and was ridden through the lane to prove slightly best with splits from the half mile pole to the wire in :23 flat and :47.4, solid drill. By Frosted from a Kitten’s Joy mare, he’s bred to handle any surface and seems pretty fit. Okay type, maybe.
View Workout Video

Take Action (March 11, Santa Anita, 6f, 1:13.4h). Grade: B-
In blinkers, worked inside Naismith (same time) and was clearly best through the lane, finishing almost a length in front at the wire while coming the final half mile in :23.1 and :47.4 on our watches under hand urging. Has a bit of run, might want to see one first, workmate was urged hard and lost his steam in the final furlong.
View Workout Video

Forecast: We’ll try to survive and advance using just two in this bottom-rung maiden claiming sprint for older fillies and mares. The first-timer Boisterously Irish has shown enough in the morning to indicate some ability, and a little certainly will go a long way against this group. The barn has solid numbers with debut runners, and with F. Prat taking the call, the S. Miyadi-trained 4-year-old looks very much like a live item. Machtenhaironfire made a right hand turn leaving the gate to fall far back and then closed a considerable amount of ground when a no threat sixth in her debut at Turf Paradise last month. She has some ability and seems certain to improve with that bit of experience behind her. How she’ll react to her rail post position today is anybody’s guess, but at 6-1 on the morning line in a very soft spot she’s worth using somewhere on your ticket.

Boisterously Irish (March 17, Santa Anita, 4f, :48.4hg). Grade: B-
Solo gate drill for S. Miyadi, splits of :24.1, :36 flat and :48.4, asked from the gate during the opening furlong before being taken in hand and allowed to coast the rest of the way, not bad for a bottom-rung maiden claiming type. Four-year-old filly should make her debut in a soft spot and will be worth a look.
View Workout Video

Forecast: Brickyard Ride (TOC=4/5; ML=8/5) can be effective on any surface up to a mile but this will be his first start down the Hillside Course, so we’re not completely sure if his blazing, runaway speed will be impacted under these unique conditions. But there is simply nothing in here that can run with him early. Indian Peak, (TOC=2-1; ML=5/2) a willing second over this course and distance in the San Simeon S.-G3 last month and a stakes winner down the hill in 2021, looks like the most dangerous of the late-runners. If the race shape plays in his favor, he’ll make some noise late.

Forecast: The nightcap is a highly-contentious grass event for entry-level allowance fillies and mares. Who in this field doesn’t have at least some kind of look? Rocking Redhead (TOC=6-1; ML=6-1) returned off a nine month layoff to run third in a sharp performance at this level over a mile and today stretches out to a nine furlongs, the distance of her maiden win more than a year ago. Most comfortable as the controlling speed, the lightly-raced daughter of Hard Spun may be able to secure that trip, though there are other potential speed types (specifically Park Avenue) that could press her early. Moraz, (TOC=7/2; ML=4-1) second in the same race ‘Redhead just finished third in, figures in the fray once again. While she has shown good early speed in the past, the daughter of Empire Maker might respond better to the patient tactics she received last time out. She gets a nice weight break with the switch to bug rider D. Herrera and may be the one to fear most. Stella Noir (TOC=2-1; ML=6-1) shows the sprint-to-route angle and a good closing style that makes her a “must use” in rolling exotic play. She could very well be just a late-running sprinter – her one prior route try, she showed early speed but readily faded - but of taken back, given some cover and then produced late, the daughter of Stay Thirsty may be a factor close home.