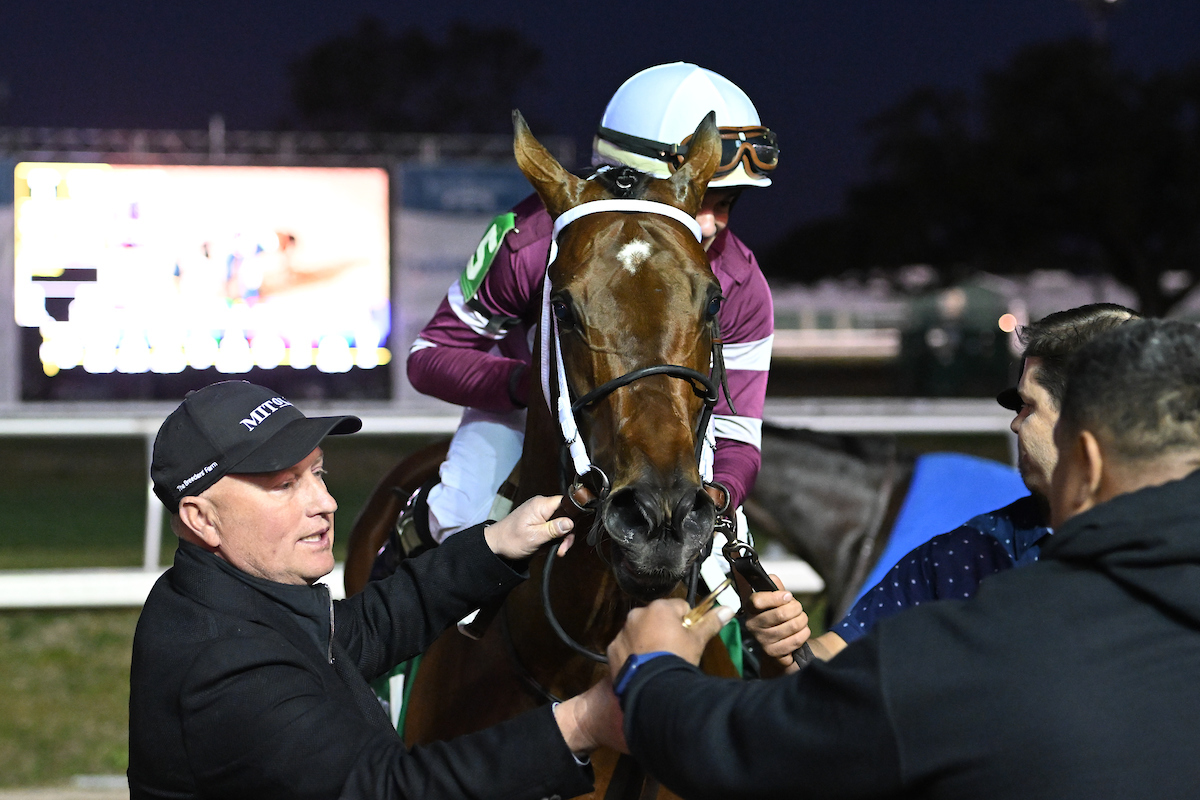 1 – Epicenter (S. Asmussen) – {pictured above} Squashed what proved to be unfounded concerns about his ability to win without a front-running trip in the Louisiana Derby-G2, and not only did the son of Not This Time stalk, pounce, and accelerate in his thoroughly pleasing two and one-half length victory, he did so with a career top speed figure and without being asked for his best in the 9.5 furlong race. His numbers have risen in each of his six career starts and there are no worries about the Derby’s classic distance. He has earned his top ranking as we await the results of several other key Derby prep races that include the Santa Anta Derby-G1, the Wood Memorial S.-G2, and the Blue Grass S.-G2.

2 – Messier (T. Yakteen) – No longer in the Bob Baffert barn and therefore eligible to earn the required Kentucky Derby-G1 points that will assure a place in the starting gate, the son of Empire Maker tuned up in a 1:00 2/5 five furlong workout April 2 seven days prior to his next start, the Santa Anita Derby-G1 on April 9. Still the fastest in his class based on speed figures, he was always going to be given a chance to participate in the Spring Classics via a trainer switch if that option became the last resort (and it was). His runaway 15-length victory in the Robert B. Lewis S.-G2 in early February remains the highest rated and most impressive performance by a 3-year-old this winter.

3 – Smile Happy (K. McPeek) – Lost little when suffering his first career defeat in a better-than-looked runner-up effort behind “loose-on-the-lead” Epicenter in the Risen Star S.-G2 at Fair Grounds. The Runhappy colt was caught in traffic and then finished with purpose against the race-shape after getting clear too late. He breezed an easy half mile in :49 2/5 at Gulfstream Park April 2 before vanning to Keeneland for the Blue Grass S.-G2 April 9 in a race that we expect will produce a significant forward move.

4 – White Abarrio (S. Joseph, Jr.) – His only defeat came when third (beaten six lengths) behind Smile Happy in the KJC S.-G2 at Churchill Downs last fall but he remained unbeaten in four starts at Gulfstream Park with a perfect trip, pace-stalking victory in the Florida Derby-G1 that produced a speed figure a few points below what will be required to win the Kentucky Derby-G1. He had missed some training time prior to his most recent win due to a minor illness, so there is hope that he can step forward in Louisville.

5 –Forbidden Kingdom (R. Mandella) – In his first start around two-turns, the son of American Pharoah blasted to the front and ran his foes into the ground in an eye-catching performance that produced a legitimate 98 Beyer speed figure. But winning in such a manner at a mile and one-sixteenth isn’t the same as doing so at the Derby’s classic distance of a mile and one-quarter. After missing a scheduled breeze in late March due to a slight temperature, he has been back on the beam in three workouts since while preparing for the nine furlong Santa Anita Derby-G1 April 9 and a collision with Messier.

6 – Simplification (A. Sano) – Reverted to his prior style as a front runner/pace presser when weakening late to finishing third behind White Abarrio in the moderately-rated Florida Derby-G1 after previously being held up in traffic and then quickening late to win the Fountain of Youth S.-G2 the previous month. Clearly prefers patient handling and likely will employ waiting tactics in the Kentucky Derby-G1 but enters the race with a resume that falls short when compared to the top-rated colts in the division.

7 – Emmanuel (T. Pletcher) – Was a well-backed second choice at 5/2 (behind Simplification) in the Fountain of Youth S.-G2 but wound up fourth, beaten just over five lengths, after a sluggish start that contributed to an extremely wide journey every step of the way. Bad trip and all, we expected a bit better. Will get his chance to prove he belongs in the division’s upper tier in the Blue Grass S.-G2 at Keeneland April 9 to prove he’s as good as we originally thought he was.

8- Morello (S. Asmussen) - Produced a workmanlike performance to remain unbeaten in three starts when winning the Gotham S.-G3 at the Big A over a one-turn mile with a perfect, pace-stalking trip. His Beyer numbers have gone from 72 to 84 to 96, a consistent leap of 12 points per outing. If he can continue that race-by-race level of improvement (easier said than done), he’ll win the Wood Memorial S.-G2. His pedigree suggests nine furlongs (and perhaps farther) should be within his range.

9– Early Voting (C. Brown) – He is undefeated in two starts, a maiden win and a dominating score in the nine-furlong Withers S.-G3 over the deeper-than-quicksand main track at Aqueduct. The assigned Beyer number originally was a weak 78, but then a month later was arbitrarily raised nine points to 87, still far short of what will be required to be competitive in the Spring Classics. Hasn’t missed a beat in a series of workouts that date back on a steady schedule since early February, so fitness should not be a problem in his next start, the Wood Memorial S.-G1 April 9.

10 – Charge It (T. Pletcher) – Finished a troubled (mostly self-caused) second in the fair-to-moderate Florida Derby-G2 behind perfect tripper White Abarrio after getting away a bit slowly and taking dirt for the first time when settling behind the leader, appearing to climb while somewhat unsettled midway, and then lugging in and swapping leads twice from the furlong pole to the wire before going down by a length and one-quarter. The raw talent is there but he’ll have to grow up in a hurry to have a say in a 20-runner runner field in the Kentucky Derby-G1.

11 – Mo Donegal (T. Pletcher) – Didn’t get the best of runs when rallying too late to be third in the Holy Bull S.-G3. Lacks a great turn of foot but has no distance limitations and has plenty of room to develop with additional experience. Was entered as the 5/2 morning like favorite in the Fountain of Youth S.-G2 (March 5) but drew a poor post, came up with a temperature, and had to scratched, leaving the Wood Memorial S.-G2 April 9 as a last chance option.

12 – Zandon (C. Brown) – Won his debut sprinting, was unlucky when nosed out in the Remsen S.-G2, and then was victimized by a wide trip and a lack of pace when third in the Risen Star S.-G2 in his sophomore debut. He’s a grinder but will run all day and may eventually be best suited as a Belmont Stakes-type. The Blue Grass S.-G1 is next.


Knocking on the door: Tiz a Bomb, Cyberknife, Taiba, Zozos