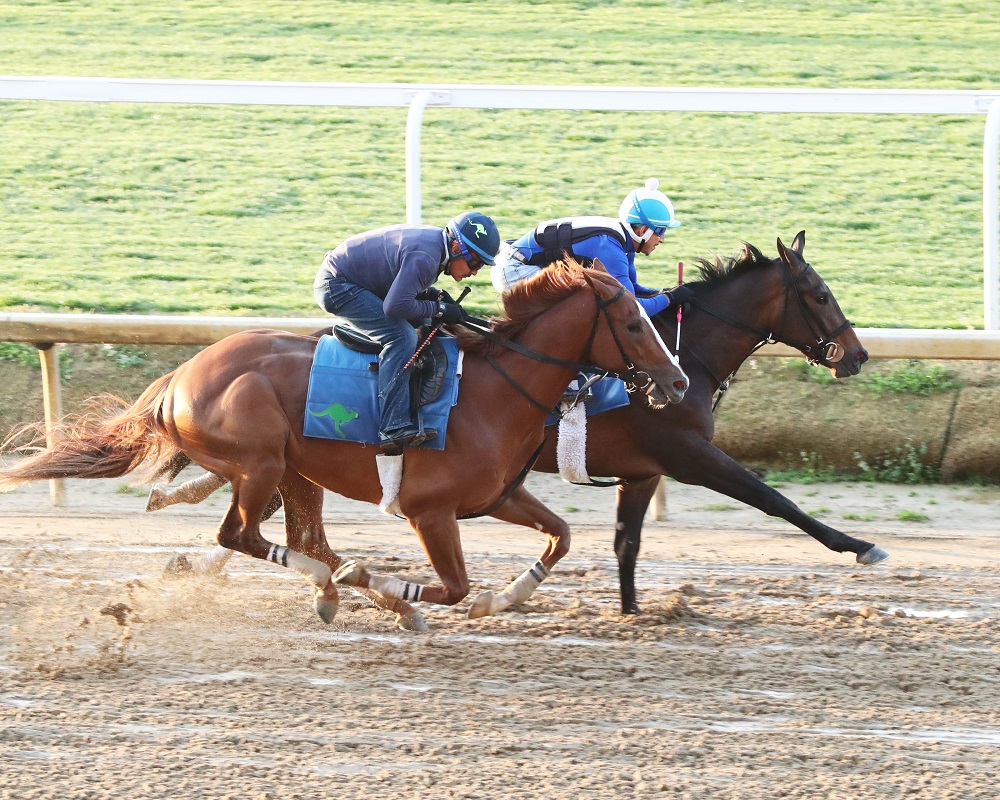 Classic Causeway, trained by Brian Lynch, will attempt to avenge his enigmatic 11th-place effort in last month’s Florida Derby (GI) in the Kentucky Derby. The Giant’s Causeway colt was scheduled to run in the $500,000 Pat Day Mile (GII) but Lynch reported Monday Classic Causeway will once again join the Derby fray.

In other Derby news, Teruya Yoshida’s Crown Pride (JPN) is scheduled to work Wednesday morning as is RED TR-Racing’s Rich Strike. Rich Strike is No. 24 on the Kentucky Derby leaderboard.

Barber Road, the runner-up to Cyberknife in the Arkansas Derby (GI), would be the first starter in the Kentucky Derby for Ortiz.

“This is a dream come true to even be here and participating in the Derby,” Ortiz said.

“My owners have about 160 years, combined, and who am I to hold them back on running in the Derby,” Lynch said Tuesday morning. “You go back to his races at Tampa and he fits right in with this field. I think he can have an advantage on the pace.”

Julien Leparoux has the mount in the Derby.

Amelia Green was aboard Mo Donegal and Hector Ramos was on Charge It.

As for Sumaya U. S. Stables’ Pioneer of Medina, he had a walk day Tuesday following a :59.80 five-furlong breeze Monday morning. Pioneer of Medina is 21st on the Road to the Kentucky Derby leaderboard, a spot that would leave him on the outside looking in should all the horses above him with more points enter on Monday.

“We got bumped yesterday,” trainer Todd Pletcher said alluding to the re-entry into the Derby picture of Classic Causeway.

And should there be one defection from the prospective Derby field, would Pioneer of Medina be a go on the first Saturday in May?

“We’re thinking about it,” Pletcher said.

CROWN PRIDE (JPN) – Teruya Yoshida’s Crown Pride (JPN) warmed up in the mile chute and then had a light gallop under exercise rider Masa Matsuda.

Winner of the UAE Derby (GII) in his most recent start, Crown Pride is scheduled to work Wednesday morning. His trainer, Koichi Shintani is scheduled to arrive in Louisville on Sunday.

Zozos, the runner-up in the TwinSpires.com Louisiana Derby (GII) for owners Barry and Joni Butzow, is slated to work Friday.

Cox announced Monday that Zozos will be ridden in the Derby by Manny Franco. Florent Geroux has the call on Cyberknife while the jockey on Tawny Port has yet to be determined.

Epicenter jogged one mile and had a light one-mile gallop under exercise rider Roberto Howell.

The speedy Epicenter showed a new style of running in the Louisiana Derby and was able to track just off of the early leaders.

“To see the way Epicenter was able to sit just off the pace in the Louisiana Derby is very pleasing considering how fast the early pace is each year in the Derby,” Hall of fame trainer Steve Asmussen said. “With 20 horses in the Derby, the post-position draw matters. We obviously hope he’s able to get away from there cleanly but the success he’s had with variable styles is one less thing to worry about.”

SMILE HAPPY, TIZ THE BOMB – Trainer Kenny McPeek’s Derby duo of Magdalena Racing’s Tiz the Bomb and Lucky Seven Stable’s Smile Happy galloped a mile and a half with Edwardo Ruvalcaba aboard the former and Danny Ramsey on the latter.

The colts worked together last Saturday with their final pre-Derby drill penciled in for this Saturday, a day in which rain is in the forecast.

“I don’t worry about things I can’t control,” McPeek said. “I would have no problem working on an off track here.”

SUMMER IS TOMORROW – Michael Hilary Burke and Negar Burke’s Summer Is Tomorrow galloped a mile and a half under Heinz Runge.

UN OJO – Cypress Creek Equine and Whispering Oaks Farm’s Un Ojo galloped about a mile and a half under Clay Courville, son of trainer Ricky Courville.

The Rebel (GII) winner is scheduled to have his final pre-Derby drill Saturday.

Trainer Chad Brown was on hand and watched his top Derby contender from the Churchill Downs clocker stand.

The Upstart colt is likely to work Saturday.