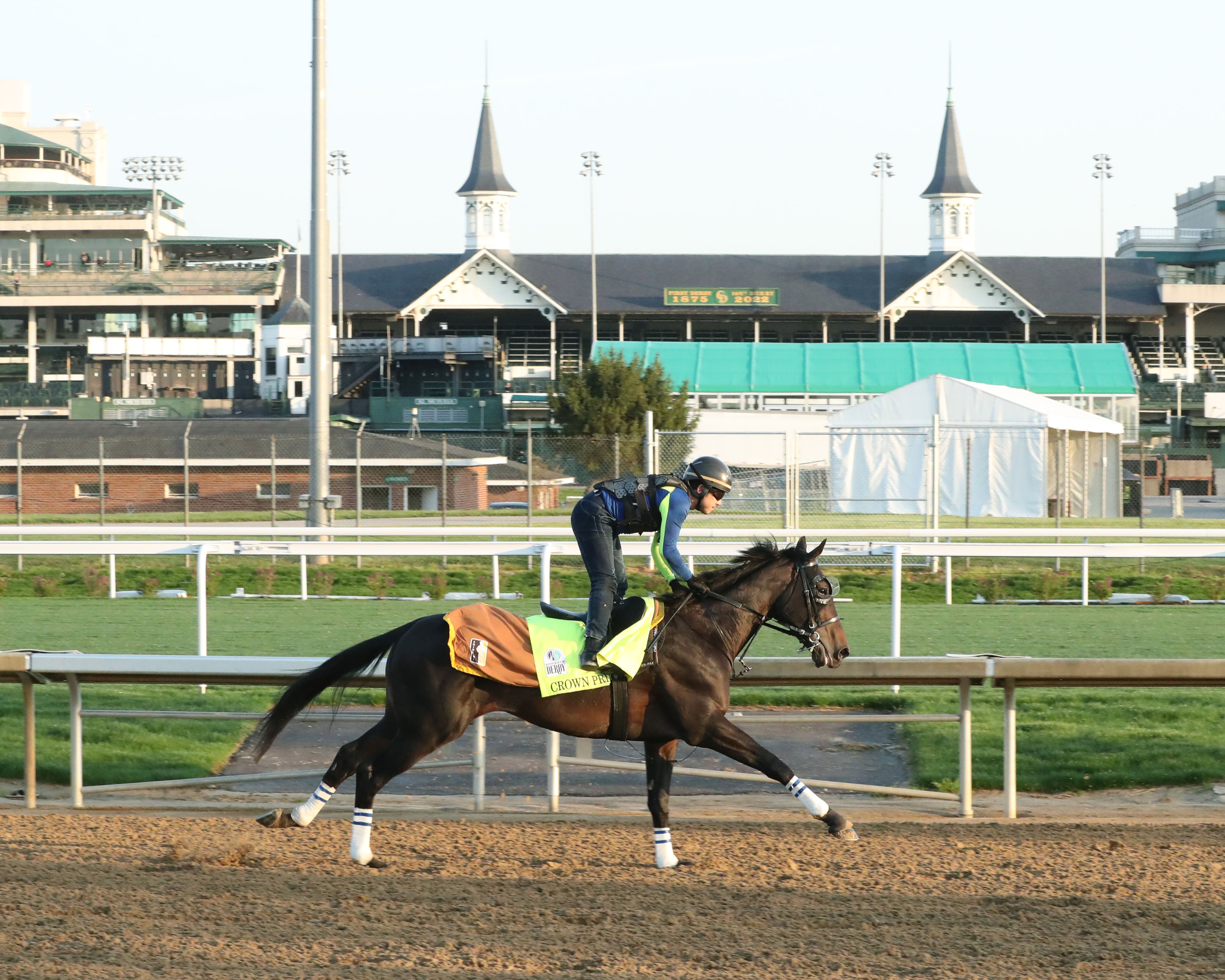 Regular exercise rider Masa Matsuda was aboard Crown Pride, who has had four works at Churchill Downs since arriving here March 30 after winning the UAE Derby (GII).

Third in the Jeff Ruby Steaks (GIII) in his most recent start, Rich Strike is 24th on the Kentucky Derby leaderboard and would need four defections from the anticipated starters to gain a spot in the starting gate for Kentucky Derby 148.

The former $15,000 weanling purchase rallied from about six lengths off the early pace in the Arkansas Derby (GI) to finish second by 2 1/2 lengths behind Cyberknife.

“I’m certainly not going to change his running style going into the Derby,” trainer John Ortiz said. “He was on the lead when he broke his maiden which gave him a lot of confidence since it was a claiming race. I think if he could be about mid-pack in the Derby it would be the ideal position.”

“It’s really exciting for my owners and for us as a barn to have a horse like this,” said Lynch, who moved to the U.S. nearly three decades ago. “We won some pretty big races in the Breeders’ Cup and Queen’s Plate but you could say it would be a dream come true to win the Kentucky Derby.”

Lynch moved from Australia and competed on the rodeo circuit riding bulls. In Australia, Lynch worked around horses and eventually bought horses on his own.

CHARGE IT, MO DONEGAL, PIONEER OF MEDINA – Trainer Todd Pletcher is watching the weather forecast as he plots the final works for his Kentucky Derby hopefuls.

“The forecast looks a little dicey for the weekend,” Pletcher said. “If the forecast looks favorable, I’d work the (Oaks) fillies Friday and the colts Saturday. I am prepared to move up a day or back a day with either of them.”

All three of his Derby hopefuls galloped 1 3/8 miles during the 7:30-7:45 morning training window for Derby and Oaks horses. Amelia Green partnered Donegal Racing’s Mo Donegal; Hector Ramos was aboard Whisper Hill Farm’s Charge It and Carlos Perez was on Sumaya U. S. Stables’ Pioneer of Medina, who is No. 21 on the Kentucky Derby leaderboard.

Crown Pride left Japan on March 17 to travel 5,000 miles to Dubai where he won the UAE Derby (GII). He traveled another 7,300 miles from Dubai to Churchill Downs, arriving here March 30. Wednesday’s work was his fourth since arriving here.

Before the work, Crown Pride warmed up in the mile chute while the track was undergoing a harrow break and following the work had a leisurely trip back to the quarantine barn.

“That is a typical Japanese training regimen,” said Japan-based representative for the Kentucky Derby Kate Hunter. “Masa was very pleased with the work. He said Crown Pride moves well over the surface with no extra effort.”

Trainer Koichi Shintani is scheduled to arrive in Louisville Sunday night and will be at the post position draw Monday afternoon.

Jockey Christophe Lemaire is scheduled to arrive in Louisville on Monday.

EPICENTER – Winchell Thoroughbreds’ Louisiana Derby (GII) winner Epicenter trained later than his normal 5:30 a.m. to school in the Kentucky Derby starting gate, which is located in the one mile chute.

Epicenter was on the track at 7:30 a.m. during the restricted window for Kentucky Derby and Oaks training. After his schooling session he had a standard gallop with exercise rider Roberto Howell in the boot.

SMILE HAPPY, TIZ THE BOMB – Lucky Seven Stable’s Smile Happy and Magdalena Racing’s Tiz the Bomb both galloped a mile and a half during the 7:30-7:45 training window for Derby and Oaks hopefuls.

Danny Ramsey was aboard Smile Happy and Edwardo Ruvalcaba was aboard Tiz the Bomb for trainer Kenny McPeek.

SUMMER IS TOMORROW – Michael Hilary Burke and Negar Burke’s Summer Is Tomorrow galloped a mile and then had a paddock schooling session under Heinz Runge.

Runner-up in the UAE Derby (GII) in his most recent start, Summer Is Tomorrow is scheduled to work Sunday.

Trainer Bhupat Seemar is scheduled to arrive in Louisville tonight.

“He walked right in there with no problem,” said Clay Courville, who rode Un Ojo through the paddock Tuesday and plans to bring him back Thursday morning after training hours as part of a walk day.

Ricky Courville is expected to make the 11-hour drive from Lafayette, Louisiana, to Louisville tomorrow.

“You couldn’t do any better than that,” Reed said of Rich Strike, who is No. 24 on the Kentucky Derby leaderboard. “Now we’ll just wait and see what happens.”

Third in the Jeff Ruby Steaks (GIII) in his most recent start, Rich Strike would need four defections from the anticipated starters to gain a spot in the starting gate for Kentucky Derby 148.