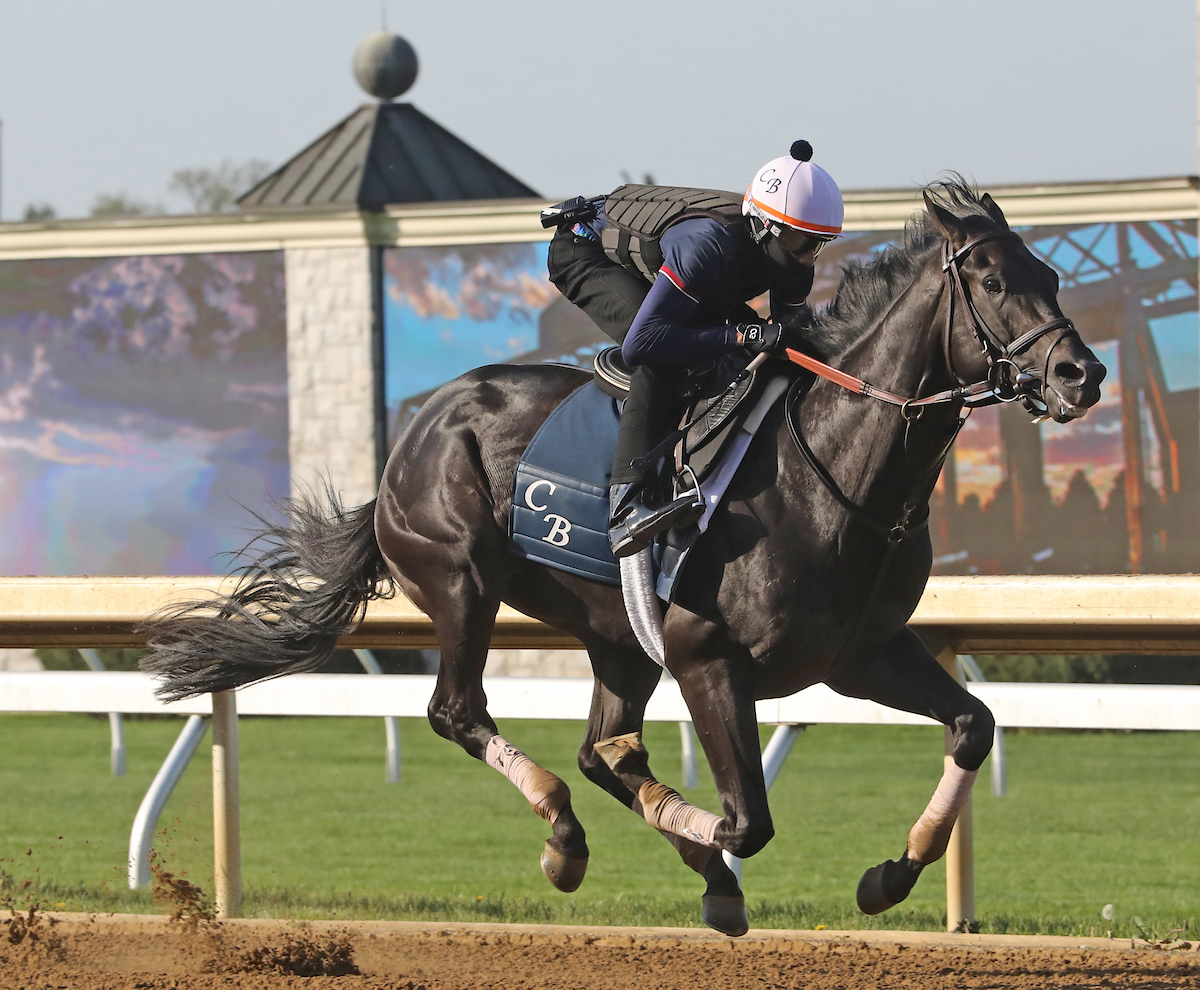 1 – Zandon (C. Brown) – Was highly impressive in victory in the Blue Grass S.-G2 while giving every indication of having developed into a true Classic contender. Raced in heavy traffic to the head of the lane but then found room and produced an electric turn of foot to win by two and one-half widening lengths before galloping out far in front. His speed figures have risen with every outing with the expectation that he will continue to improve with experience and distance. It would be no surprise if he went to the post as the lukewarm Kentucky Derby favorite. Latest workout: April 23, 2022, Keeneland, 4f, :48.3b (24/94).

2 – Epicenter (S. Asmussen) – Squashed what proved to be unfounded concerns about his ability to win without a front-running trip in the 9.5F Louisiana Derby-G2, and not only did the son of Not This Time stalk, pounce, and accelerate in his thoroughly pleasing two and one-half length victory, he did so with a career top speed figure and without being asked for his best. His numbers have risen in each of his six career starts and there are no worries about the Derby’s classic distance. Latest workout: April 24, 2022, Churchill Downs, 6f, 1:12.1b (3/4).

3 – Messier (T. Yakteen) – Pressed the pace, took command into the lane but simply couldn’t stay with stable mate Taiba in the final sixteenth and wound up second best, beaten two lengths while 10 clear of the rest, in the Santa Anita Derby-G1. Still the fastest in his class based on speed figures, the son of Empire Maker was making his first start in more than two months following a runaway a 15-length victory in the Robert B. Lewis S.-G2 in early February and could easily produce a significant forward move at Churchill Downs with this excellent tightener behind him. Latest workout: April 23, Santa Anita, 5f, :59.4h (9/48).

4 – Taiba - (T. Yakteen) - Purchased last year in the Fasig-Tipton March 2-year-old in training sale for $1.7 million, the son of Gun Runner has come from nowhere to rank among the very best in his division, winning his debut in March by more than seven lengths (when trained by B. Baffert) and then stepping into Grade-1 company, stretching out to nine furlongs, and proving clearly best over stable mate Messier in the Santa Anita Derby, with both performances earning triple digit Beyer speed figures. Will try to become the first horse since Leonatus in 1883 to win the Kentucky Derby off just two career starts. We wouldn’t put it past him. Latest workout: April 28, Santa Anita, 6F, 1:12.4h (1/4).

5 – Charge It (T. Pletcher) – Finished a troubled (mostly self-caused) second in the fair-to-moderate Florida Derby-G2 behind perfect tripper White Abarrio after getting away a bit slowly and taking dirt for the first time when settling behind the leader, appearing to climb while somewhat unsettled midway, and then lugging in and swapping leads twice from the furlong pole to the wire before going down by little more than a length. The raw talent is there but he’ll have to grow up in a hurry to have a say in a 20-runner runner field in the Kentucky Derby-G1. Latest workout: April 22, Churchill Downs, 5f, 1:00.2b, 10/47)).

6 – White Abarrio (S. Joseph, Jr.) – His only defeat came when third (beaten six lengths) behind Smile Happy in the KJC S.-G2 at Churchill Downs last fall but he remained unbeaten in four starts at Gulfstream Park with a perfect trip, pace-stalking victory in the Florida Derby-G1 that produced a speed figure a few points below what likely will be required to win the Kentucky Derby-G1. He had missed some training time prior to his most recent win due to a minor illness, so there is hope that he can step forward in Louisville. Latest workout: Latest workout: April 24, Gulfstream Park, 5f, 1:00b (5/13).

7 – Mo Donegal (T. Pletcher) – Didn’t get the best of runs when rallying too late to be third in the Holy Bull S.-G3 in early February but took full advantage of a dream run to tag pace setter Early Voting by a neck in the Wood Memorial S.-G2 two months later (he had been entered and scratched in the Fountain of Youth S.-G2 in early March). Lacks a great turn of foot but has no distance limitations and has plenty of room to develop with additional experience. Speed figures have risen with each outing though another forward move (entirely possible) will be required to win or at least hit the board in Louisville. Latest workout: April 22, Churchill Downs, 4f, :50.1b (49/62).

8 – Simplification (A. Sano) – Reverted to his prior style as a front runner/pace presser when weakening late to finishing third behind White Abarrio in the moderately-rated Florida Derby-G1 after previously being held up in traffic and then quickening late to win the Fountain of Youth S.-G2 the previous month. He clearly prefers patient handling and likely will employ waiting tactics in the Kentucky Derby-G1 but enters the race with a resume that falls short when compared to the top-rated colts in the division. Latest workout: April 22, Gulfstream Park, 5f, :59.2b (4/17).

9– Early Voting (C. Brown) – Suffered his first defeat in three career outings when going down by a neck as the controlling speed to the late-rallying Mo Donegal in the Wood Memorial-G2. Despite the gut-wrenching loss, the son of Gun Runner lost little in defeat in a performance that easily earned a career top speed figure. He should be tighter and tougher in his next start, but as of this writing his connections haven’t committed to a Derby start and in fact might be leaning towards the Preakness S.-G1. Latest workout: April 23, Belmont Park, 4f, :49.4b TT (44/118).

10 – Smile Happy (K. McPeek) – Suffered his first career defeat in a better-than-looked runner-up effort behind “loose-on-the-lead” Epicenter in the Risen Star S.-G2 at Fair Grounds in March but then failed to produce a forward move as hoped when runner-up but no match behind Zandon in the Blue Grass S.-G2 in his final Derby prep. Was forced wide early but then enjoyed a perfect stalking trip the rest of the way yet put up little resistance after hitting the front in the final sixteenth, eventually going down by more than two lengths. It is entirely possible that the Derby’s 10-furlong trip will prove to be out of his range. Latest workout: April 23, Churchill Downs, 5f, 1:00.2b (12/70).