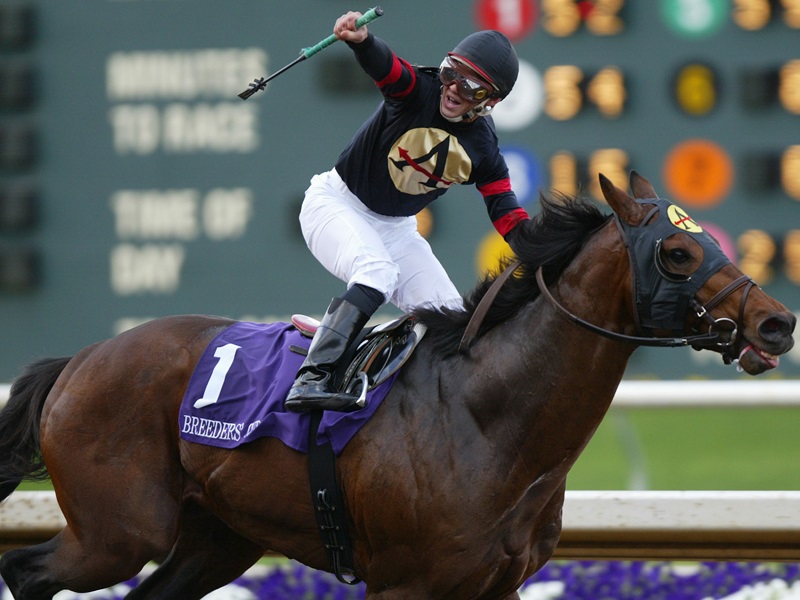 When Arrogate won the Breeders’ Cup Classic at Santa Anita Park last year for Hall of Fame trainer Bob Baffert, the colt was assigned a 120 Beyer Speed Figure. It ranks as one of the highest Beyers in the history of the Breeders’ Cup, which was held for the first time in 1984.

There have been just six bigger Beyer Speed Figures recorded by a BC winner than Arrogate’s 120. They are:

These are the remaining Beyer Speed Figures of 115 or higher to have been posted by a BC winner:

As a big Inside Information fan, I could not help but feel sad when Claiborne Farm in Kentucky announced that the daughter of Private Account and Pure Profit had died last Saturday at the age of 28 from natural causes due to old age.

In terms of the highest winning Beyer Speed Figures in the history of the Breeders’ Cup, Very Subtle’s 121 and Princess Rooney’s 120 are the only Beyers ever recorded in a BC race by a filly or mare that are bigger than Inside Information’s 119 in the 1995 BC Distaff. The same day that Inside Information won the BC Distaff, the great Cigar won the BC Classic and was assigned a 117 Beyer Speed Figure.

As a broodmare, Inside Information produced Smuggler, who was voted a 2005 Eclipse Award as champion 3-year-old filly.

I submit that we have seen three different versions of Arrogate since his first stakes victory in the Grade I Travers in 2016.

“Arrogate A” is the colt who won the Travers Stakes in 2016 by 13 1/2 lengths. His final time of 1:59 1/5 (1:59.36 in hundredths) shattered Saratoga’s 1 1/4-mile track record by four-fifths of a second. He was assigned a 122 Beyer Speed Figure. The Beyer Speed Figures listed in the American Racing Manual for the Travers go back to 1990. Arrogate’s 122 is the highest ever recorded by a Travers winner. The second-highest Travers figure is the 117 recorded by another Baffert trainee, Point Given, in 2001.

“Arrogate A” is the colt who won the Grade I BC Classic at Santa Anita in 2016. A powerful late surge carried the 3-year-old past no less an accomplished runner than 5-year-old California Chrome, the 2014 and 2016 Horse of the Year.

“Arrogate A” is the colt who, in a sensational performance for the ages, won the Group I, $10 million Dubai World Cup by 2 1/2 lengths on March 25 despite a horrible start. He ran right by no less than Gun Runner in the final furlong. As Arrogate approached the finish, Terry Spargo said during his call of the race:

“ ‘A’ is for Arrogate. ‘A’ is for absolute superstar. ‘A’ is for anointing. And we’ve seen the anointing of the Man o’ War of the 21st century, Arrogate, a brilliant winner of the Dubai World Cup.”

But we have not seen “Arrogate A” since the Dubai World Cup.

In Del Mar’s Grade II San Diego Handicap on July 22, we did not see “Arrogate A” or even “Arrogate B.” We saw what I will call “Arrogate F,” because F is the grade he earned for his lousy San Diego effort, a shocking 15 1/4-length defeat when he finished fourth as a 1-20 favorite behind Collected, Donworth and Cat Burglar.

At least we did see what I will call “Arrogate B” in Del Mar’s Pacific Classic on Aug. 19.

Arrogate lost again, but by only a half-length. Collected, who also resides in the powerful Baffert barn, won the Pacific Classic.

“Arrogate A” recorded Beyer Speed Figures of 122 in the Travers, 120 in the BC Classic and 119 in the Pegasus World Cup. This Arrogate was a super horse, one some folks said was the best seen since Spectacular Bid.

“Arrogate B” posted a Beyer Speed Figure of 114 in the Pacific Classic. This Arrogate clearly did not possess the same super powers he had exhibited in his first four stakes victories (Travers, BC Classic, Pegasus World Cup, Dubai World Cup).

“Arrogate F” posted a Beyer Speed Figure of only 85 in the San Diego.

If it is “Arrogate A” who shows up in this year’s BC Classic, which means the Arrogate who runs Beyers from 119 to 122, he probably will win. A 119 to 122 quite likely would be plenty good enough to get the job done. Keep in mind these are the career-best Beyers for the BC Classic contenders currently listed at 15-1 odds or lower at the Wynn Race Book in Las Vegas:

If it is “Arrogate B” who shows up in the upcoming BC Classic, which means the Arrogate who runs a Beyer of 114 or so, can he win? It isn’t a probability, but it would be a possibility. “Arrogate B” certainly could win or at least hit the board.

Regardless of which Arrogate shows up in the BC Classic, it has been announced that it will be the final start of his career. I am somewhat surprised this already has been determined. Considering how terrific Arrogate ran at Gulfstream Park early this year to win the Pegasus World Cup, I would have thought a decision regarding Arrogate’s retirement would not have been made until after the BC Classic in order to leave the door open for a possible defense early in 2018 of his 2017 Pegasus World Cup victory.

As of today, these are my choices in terms of favoritism for each of the 13 Breeders’ Cup races (this, of course, is subject to change):