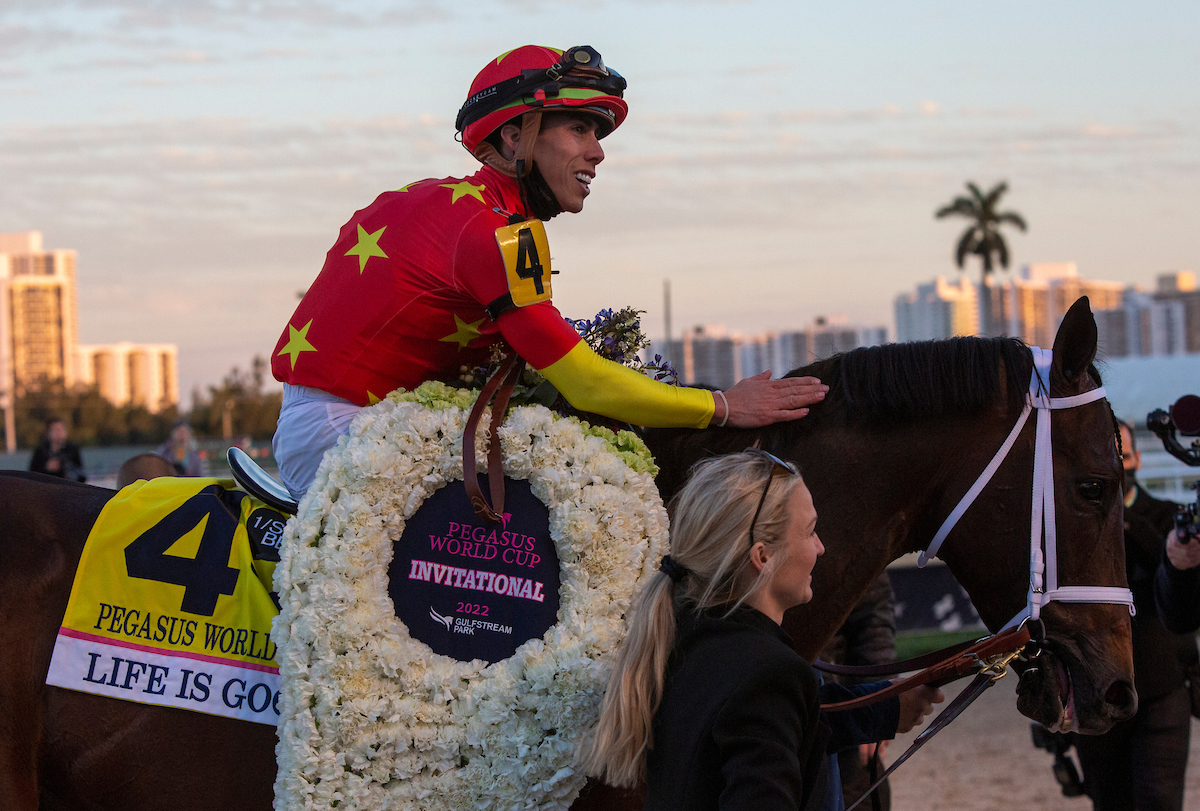 The son of the sensational second crop stallion Gun Runner has trained like a nice prospect (see below), though not a sprinter type, which is why it is not surprising he debuts going long on grass in this maiden affair for juveniles. The Steve Asmussen-trained colt attracts the stable’s “go-to” rider Joel Rosario and catches a field that on paper doesn’t look all that strong, so at 5/2 on the morning line he should offers legitimate value both in the win pool and in the various rolling exotics.

Well-regarded 3-year-old is improving with each outing and today steps into Grade One stakes company in this year’s renewal of the Saratoga Derby Invitational. Successful in three of four career outings, including the recent Manilla Stakes at Belmont Park, the Todd Pletcher-trained colt has been primarily a miler so far in his career, but this mile and three-sixteenths turf assignment should be well within his capabilities, and with a second flight, stalking position that he is projected to enjoy, the son of War Front should have every chance from the quarter pole home to seal the deal. He’s 5/2 on the morning line, and at that price he’s a win wager in the straight pool and a strong play in the various rolling exotics. Also worth considering on your ticket is 10-Stone Age, who didn’t get the best of runs in the Belmont Derby but has form overseas that make him the one to fear most.
*

Red Route One (July 29, Saratoga, 5f, 1:01.2b TT). Grade: B
Not the prettiest of movers but definitely can run some, even but slightly best outside Impressor (same time) for S. Asmussen, never really asked much, final quarter mile in :24.2 with plenty left. Juvenile son of Gun Runner seems fit, acts like a route type, and should be live at first asking.
View Workout Video

Battle of Normandy (July 15, Saratoga, 4f, :49.2b TT TC DU). Grade: B-
Even inside with Fort Washington (same time) for Shug, light coaxing only, around dogs on turf in okay move while gearing up for his debut. City of Light colt brought $500,000 as a yearling, would prefer to see one first.
View Workout Video

Safe Conduct (July 30, Saratoga, 4f, :49.1b TT TC). Grade: B
Steady breeze inside the dogs, maintenance drill for Serpe, finishing without coaxing and with something left. Does his best on or near the lead going long and seems set for a good effort in the Lure Stakes.
View Workout Video

Perform (July 30, Saratoga, 4f, :47.2b TT). Grade: B
Even but a tad the best inside General Jim (same time) for Shug, mild pressure through the lane, final quarter mile over training track in a smart :23 flat. Like the way this Good Magic colt moves, finished an okay second in debut and probably can step forward a bit next time.
View Workout Video

Arthur’s Ride (July 31, Saratoga, 4f, :49.1bg TT). Grade: B-
Best outside Jungfrau (same time) for W. Mott, not quick early but edging clear outside under some coaxing, splits of :24 flat and :36.1 in gate drill on training track. Has some run but doesn’t act like a speed type (more like a closer); eventually should do his best in an extended sprint or over a route of ground.
View Workout Video

Rocket Can (July 24, Saratoga, 4f, :47.3bg). Grade: B
Broke a tad in the air and then moved up to press Mr. McGregor (same time) outside to the turn, then was asked to pick it up and responded to pull clear from workmate under mild urging in solid drill while preparing for racing debut. Son of Into Mischief has trained well enough to expect a good effort first crack out of the box for W. Mott. Probably not a real quick type, probably more of a steady, one-paced sort.
View Workout Video

War Like Goddess (July 30, Saratoga, :51b TT). Grade: B
Under wraps outside Channel Maker (same time) in breezing drill on the main track, sharp and eager but always under cruise control. Ready for a major effort in her first start since April.
View Workout Video

Matareya (July 31, Saratoga, 4f, :49b). Grade: A-
Sat off Kinetic Sky (4f, :50b TT) and then blew on by when given her cue through the lane, breezing to the wire with a ton left and galloping out far in front, final quarter mile in :23.2. Couldn’t be doing better and will be a very short price in the Test S.-G1.
View Workout Video

Life Is Good (July 30, Saratoga, 4f, :48.1b). Grade: A-
Absolutely breezing and galloping out with a ton left in breezing drill while staying sharp as a tack. One to catch, for sure, in the Whitney. As good if not better now than he was in the Nerud.
View Workout Video

Emmanuel (July 24, Saratoga, 5f, 1:00.1b, TT TC). Grade: B
Clearly best inside Mezcal (5f, 1:00.2g TT TC) while breezing inside the dogs, very light coaxing to maintain half-length advantage most of the way. Missed his last scheduled start Belmont Derby due to due invalid paper work technicality but should fire his best shot in the Saratoga Derby.
View Workout Video

Nations Pride (July 31, Saratoga, 6f, 1:15.1b TT TC). Grade: C+
Broke off in front of With the Moonlight (6f, 1:15b TT TC) but was ridden late while unable to keep pace, dropping back by than a length at the wire. Certainly expected better, not very encouraging.
View Workout Video

Annapolis (July 23, Saratoga, 5f, 1:01b TT TC). Grade: B+
Inside the dogs, breezing through the lane outside and appearing best with Capensis (same time), nice hold through the lane while appearing sharp and relaxed. Continues to improve and rates a legit chance in the Saratoga Derby.
View Workout Video