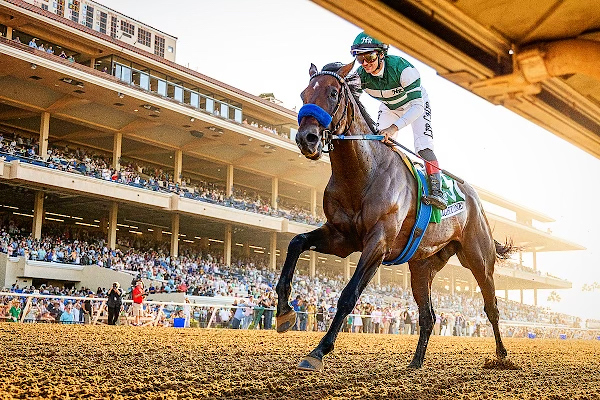 Two-year-old Secretariat’s Sept. 24 workout was his first since winning the Futurity on Sept. 16 at Belmont as a 1-5 favorite on the tote board. It was his fifth straight victory.

Four-year-old Flightline’s Sept. 24 workout was his first since winning the Pacific Classic on Sept. 3 at Del Mar as a 1-5 favorite on the tote board. It was his fifth straight victory.

Assistant trainer and regular exercise rider Juan Leyva was aboard Flightline for his Sept. 24 solo drill. You can view the workout on XBTV.

In this latest workout by Flightline, once again he was pure poetry in motion.

According to Daily Racing Form’s Brad Free, Sadler timed Flightline in :12.00 for the opening furlong, :23.80 for the quarter, then :35.80 for three furlongs. Sadler clocked Flightline completing the four-furlong drill in :48.40.

Be it :48.00 or :48.40, it was an excellent work on the part of Flightline, especially considering he did it effortlessly and on a surface playing slower than the main track at Del Mar.

As an indication of how well Flightline has been doing since his spectacular Pacific Classic performance, Free noted that this was the first time the Tapit colt has worked so soon after a race.

“He was going to work either three or four weeks” after the Pacific Classic, Sadler said. “He’s doing so well. It gives us plenty of spacing into the big one. You build in a little cushion.”

The “big one” is the $6 million Breeders’ Cup Classic at Keeneland on Nov. 5.

In Flightline’s lone other 2022 start to date, he overcame a tardy start and early adversity to win the Met Mile by six lengths on June 11. He will go into the 1 1/4-mile BC Classic having won all five of his career starts by a combined 62 3/4 lengths.

The 126 Beyer for Flightline in the Pacific Classic is tied for the second-biggest figure in any race since the Beyers were first made public in 1991 (initially in the Racing Times, then in the Daily Racing Form).

Ghostzapper owns the highest Beyer Speed Figure since 1991. He recorded a 128 when he won Monmouth Park’s Philip H. Iselin Handicap at 1 1/8 miles by 10 3/4 lengths on a sloppy track in 2004. Ghostzapper then captured the BC Classic later in 2004 at Lone Star Park. His 124 Beyer in the BC Classic is tied with 1989 winner Sunday Silence for the biggest figure in the history of that race, which was first run in 1984.

According to Andy Beyer, creator of the Beyer Speed Figures, three other horses have run a 126 since 1991. All three did it in 1997. They were Formal Gold, Gentlemen and Will’s Way.

In the Pacific Classic, Flightline also received the best Thoro-Graph number in the 35 years that they have been computing those speed figures.

In terms of Beyer Speed Figures, the higher the number the better. The opposite is true for Thoro-Graph numbers.

According to Bill Finley of the Thoroughbred Daily News, Flightline’s Thoro-Graph number for the Pacific Classic was a negative 8 1/2.

The previous lowest Thoro-Graph number was Frosted’s negative 8 when he won the Met Mile at Belmont Park by 14 1/4 lengths in 1:32.73.

How far-reaching was Flightline’s 19 1/4-length Pacific Classic victory? It even caught the attention of Queen Elizabeth II. She called Lane’s End Farm’s Bill Farish the day after that race to discuss Flightline, according to a BloodHorse article written by Eric Mitchell.

“This was purely a conversation just because The Queen is so fascinated by racing,” said John Warren, The Queen’s bloodstock and racing manager since 2001, who initiated the call.

“Because of the Baaeed story, which obviously we all have been following here [in Europe], it was fun to be able to talk about another horse, admittedly on a different surface, that was catching the American racing fraternity in the same way,” Warren said.

Farish said that The Queen “was very interested in Flightline, his history and his pedigree. It is amazing that she was still so involved. It shows how much she loved the game.”

The Queen died at the age of 96, just four days after her chat with Farish about Flightline.

SECRETARIAT: A TWO-TIME HORSE OF THE YEAR

Secretariat’s 1972 workout in 1:01 4/5 on Sept. 24 was the first of the four drills he had between the Sept. 16 Futurity and the Oct. 14 Champagne, according to the log of the colt’s training regimen compiled by William Nack. That log is listed in Raymond Wolfe’s book “Secretariat.” The most notable of the four works was Secretariat’s one-mile drill in 1:36 2/5 on Oct. 4.

To put that 1:36 2/5 clocking by Secretariat in a workout into perspective, when stablemate Riva Ridge won the Champagne by seven lengths a year earlier, his final time in the race was 1:36 4/5.

Secretariat finished first by two lengths in the one-mile Champagne Stakes at Belmont on Oct. 14. His final time was 1:35 flat. Stop the Music came in second. However, Secretariat was disqualified and placed second for bumping Stop the Music near the three-sixteenths marker. Stop the Music was promoted to first.

Following the Champagne, Secretariat won the 1 1/16-mile Laurel Futurity by four lengths. Stop the Music finished second. Secretariat then completed his 2-year-old campaign by registering a 3 1/2-length triumph in the Garden State Stakes.

Secretariat ranks second, behind only Man o’ War, on my list of the Top 100 Racehorses of the 20th Century to have won in North America. That list appears at the bottom of this blog.

Well, it turned out that Taiba is the horse I think he is.

“I still believe in Taiba,” I explained as to why I was picking him to win the 1 1/8-mile Pennsylvania Derby. “I think he is an extremely talented colt with much upside. I like the way he has trained up to the Pennsylvania Derby. He’s had seven published workouts since the Haskell, four of which were bullet drills.

Hall of Fame jockey Mike Smith rode Taiba again last Saturday for Hall of Fame trainer Bob Baffert. Smith has been the colt’s pilot in four straight starts after Hall of Famer John Velazquez rode him in his victorious career debut at Santa Anita on March 5.

In the Pennsylvania Derby, Taiba raced close up through the early stages while saving ground alongside the inside rail. On the far turn, Taiba was racing right behind dueling leaders White Abarrio and Simplification.

Turning for home, Smith angled Taiba to the outside. Exhibiting an impressive turn of foot, Taiba advanced quickly to take the lead at the top of the lane. He then powered home to win by three emphatic lengths in 1:48.67 as the 7-5 favorite in the field of 11.

Consider what has been asked of Taiba after his 7 1/2-length debut victory and 103 Beyer Speed Figure in early March. He has run in four consecutive Grade I races.

Taiba won the Grade I Santa Anita Derby on April 9 (first horse ever to win that race having made only one previous career start). Next, he ran 12th in the Grade I Kentucky Derby on May 7. After the Run for the Roses, he lost the Grade I Haskell Stakes by a head when second to Cyberknife on July 23. Taiba then avenged his narrow Haskell defeat when he finished 6 3/4 lengths in front of Cyberknife last Saturday.

Below are the Beyer Speed Figures for Pennsylvania Derby winners going back to 1992 (the first year they were listed in the American Racing Manual):

Taiba was part of an extraordinary feat last Saturday by his sire, 2017 Horse of the Year Gun Runner.

Gun Runner was the sire of five stakes winners last Saturday. Two of the five victories came in Grade I races. Besides Taiba’s Grade I win in the Pennsylvania Derby, Society “ran them off their feet,” as they say, when she won Parx’s Grade I, $1 million Cotillion by 5 3/4 lengths in front-running fashion at 7-1 Saturday.

“I have never seen anything like it,” Winchell Thoroughbreds racing manager David Fiske said of Gun Runner being represented by five stakes winners in one day in a BloodHorse article written by Joe Perez. “And neither has anybody else.”

As mentioned above, Sixtythreecaliber won a race at Churchill Downs last Saturday called the Seneca Stakes. This brought to mind something unusual that I witnessed at Louisiana Downs in 1980.

Racing secretary Bennett Parke carded the Seneca Stakes for Louisiana-bred fillies and mares on the turf to be run on July 5. Greenback Gert, ridden by Randy Romero, won it. But then Parke carded that same stakes race again on Aug. 23. When I asked Parke about it, he admitted that he simply had goofed. And so it turned out that Annie Christmas, with Marvin Holland aboard, won another running of the Seneca Stakes at the same 1980 Louisiana Downs meet.

The Super Derby for many years was one of the nation’s most important races for 3-year-olds. In addition to Temperence Hill, it was won by such sophomores as Sunny’s Halo, Gate Dancer, Creme Fraiche, Alysheba, Seeking the Gold, Sunday Silence, Soul of the Matter and Tiznow.

Sadly, Louisiana Downs managed to wreck the Super Derby, allowing it to become a shell of its former self. It hasn’t even been run since 2019.

What has happened is the $1 million Pennsylvania Derby, which Parx has done a splendid job with, has essentially taken the place of the Super Derby on the national racing calendar.

The Top 10 for this week is below:

The Top 10 for this week is below:

I also recently came up with a list of the Top 100 Racehorses (active horses only) of the 21st Century so far to have won in North America.

While Landaluce was absent from BloodHorse’s Top 100, I put her at No. 75. But after taking another look at the extremely talented filly in Mary Perdue’s new book “Landaluce: The Story of Seattle Slew’s First Champion,” and after I recently wrote about Landaluce for Xpressbet.com, I concluded that by ranking her No. 75, I wasn’t giving Landaluce nearly enough credit that I now think she deserves.

Landaluce won her five career races by a combined 46 1/2 lengths and drew comparisons to the legendary Ruffian. I have decided to move her all the way up to No. 34 on my Top 100 Racehorses of the 20th Century

It so happens that Landaluce is just one of a number of female Thoroughbreds who raced in the 20th century that I have given much more respect to than BloodHorse did in its Top 100.

BloodHorse had the great Ruffian ranked No. 35. I have her all the way up at No. 11.

Personal Ensign was ranked No. 48 by BloodHorse. I have her No. 33.

Below is my list of the Top 100 racehorses of the 21st century so far to have won in North America (active horses excluded):