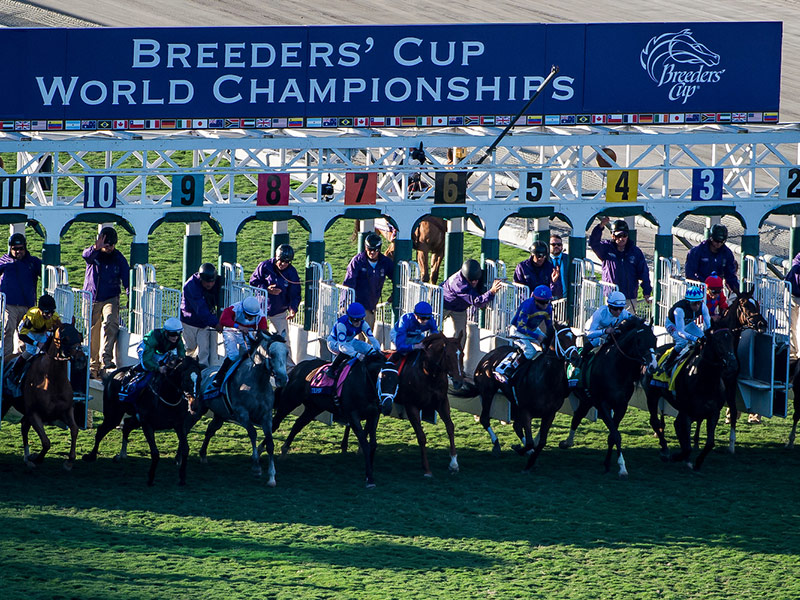 With all 13 Breeders’ Cup races drawn and the past performances out, there’s little left to do but fine-tune some opinions and run the races. I could rehash all the contenders, talk betting strategies and give out picks, but at some point, we all get a little sick and tired of all that and it becomes overload. So instead, I thought I’d go through each individual race (in order) and toss out a bold prediction that just may prove true.

In a race with very little speed and a few tight turns that could throw the Euros in disarray, not to mention leave heavy favorite Rushing Fall with a lot to do late, there’s an always dangerous “Lone F” in Ultima D, who should be able to have her own way on the front end. When you’re only going a mile on the Del Mar turf, that’s a very good thing.

Mor Spirit looked about 3/5 in this race in June, after he walloped Sharp Azteca, among others, in the GI Met Mile, but he hasn’t been seen since and that was at one-turn, while at two he hasn’t been quite as brilliant. Stablemate Cupid, on the other hand, has never been brilliant and seems like he was in the right place at the right time when he won the GI Gold Cup at Santa Anita. both rate as real tweeners here, which could be their ultimate undoing.

Juvenile Turf: The Euros won’t hit the board

The somewhat shocking defection of Coolmore’s defection U S Navy Flag left the Euros a bit light, and he wasn’t that heavy to begin with. Stablemate Mendelssohn seems second, if not third, tier, and Beckford, Masar and James Garfield were never remotely close to being considered in the upper echelon across the pond. And while the Americans are hardly world beaters, the gut here says they hold the aces, as Untamed Domain has some class to him, Catholic Boy has looked like a horse ready to come out of his skin locally, Voting Control is only scratching the surface of his potential and Hemp Hemp Hurray looks loose.

I like Stellar Wind. I want to pick Stellar Wind. I will root for Stellar Wind. But she won’t win. For whatever reason, on racing’s biggest day, she always seems to find one of two better. She couldn’t run down Stopchargingmaria (I still have trouble typing that she actually won the Distaff) in 2015 then didn’t fire last year behind Beholder and Songbird in a race for the ages. Neither of those gals are here this year, and Stellar Wind has seemingly never been better and is a very important 3-for-3 over the track, but between a loose Paradise Woods and a streaking Elate, she seems destined to find one better once again.

Juvenile Fillies: Someone will blow up the board…underneath

While race favorite Moonshine Memories is rock solid, and Heavenly Love looks like the main danger, the other “favorites” seem to have as many questions as answers, which could mean someone completely out of left field can sneak into the number. Alluring Star, Wonder Gadot and Separationofpowers all hail from powerful barns and enter off big performances, but none of them seem a real threat to the top pair and could be vulnerable. The former was no match for Moonshine Memories last time and looks more like a one-turn horse, Wonder Gadot has never been on dirt and seems like a filly without a race, and Separationofpowers drew poorly, has never been two turns and will be wildly overbet. That leaves a chasm of gals at big prices who won’t have to improve all that much to spice up your tri or super. Gio Game freaked in her two-turn dirt debut, Piedi Bianchi looks like a stayer and could pick up a lot of the stragglers in the lane and Caledonia Road is bred to love two turns and impressed when a clear 2nd behind Separationofpowers off nothing but a maiden win in the slop.

Turf Sprint: Marsha is up against it

Yes she beat the heavy favorite Lady Aurelia last time, but crack Euro sprinter Marsha doesn’t seem the type who will relish a very snappy 5 furlongs on the Del Mar turf. Lasix could help, and she is a 5-furlong specialist, but Marsha has been running in Europe, where even the turf sprints have a slow late-fast early race flow, which is nothing like she’s going to see here. In a big field where early position will be crucial, I just don’t see Marsha being close enough early to make a dent late. If you watch her run in Europe, she’s usually midpack before making a late run. Midpack across the pond, where the races are a lot slower during the initial stages than they are stateside, is nothing like being midpack here, which I fear will be her ultimate undoing.

Filly & Mare Sprint: Unique Bella isn’t the lock you think she is

Yes she’s brilliant. Yes all she does is win for fun. Yes she has yet to face a real challenge. But heavy favorite Unique Bella is in unchartered territory here, as she’s actually facing some stiff challenges, off just one prep too, and without any real advantage in the speed figure category, all while running in her first ever grade I. Sure, none of it may matter and she might win her sixth straight with ease, but at about 7/5 she’s the type you’re supposed to play against, as you’ll be getting a much better price on several other gals—older gals—who have been battled-tested in top grade I company and lived to tell about it.

It would be awesome to see Lady Eli close out her career with another Breeders’ Cup win. She’s proven to be one of the most heartwarming stories in the past decade or so, and only her will and determination rival her talent. But much like Unique Bella, you’re going to have to take 8/5 or so on a mare who isn’t that imposing on paper, and one who also has a penchant for cutting it close and waiting on horses in the stretch. It’s also noteworthy that this year’s renewal of the Filly & Mare Turf is a much saltier one than last year’s, though it’s also right to mention the cutback to 1 1/8 miles will help Lady Eli as much or more than anyone else. But again, at extremely short odds, do you want a mare who has won her last three by a half-length, a head and 1 ½ lengths, or the rest of the field, which have a combined eight grade I wins among them? Lady Eli is clearly the horse to beat, but stablemates Dacita and especially Grand Jete are rock solid, Avenge owns a pace advantage and will like the cutback too, and Rhododendron is all class for the Coolmore boys. Don’t be surprised if one of them gets there first.

I don’t really know why, but the gut says Calculator, who once gave American Pharoah all he could handle as a 2yo, might finally have a bit of sunshine after a potentially heady career got derailed by myriad injuries. He doesn’t really fit in a 6F race, but there’s a ton of speed in here and just maybe he picks the right day to put it all together and he remembers the horse he was once cut out to be. His closing 2nd in the GII Pat O’Brien here going 7Fs in August was sharp, and they are going to go a lot faster than the :45 he saw that day, so while he hasn’t tried 6Fs before (which seems impossible), just maybe he comes rolling through the lane and gives them all a big scare when it starts to fall apart late.

Mile: Ribchester is over the top

Ribchester, the best miler in Europe, almost seems here as an afterthought, as Godolphin looks to squeeze a few more drops out of the lemon before he’s retired after the race. The worry is that even an 80% Ribchester is good enough to win, but his European form is a bit spotty, even though he’s got three GI wins to his credit. And yes, winning the Queen Anne at Royal Ascot is heady stuff, and the Lockinge and Prix du Moulin are legitimate group I’s too, but there was no one of any real quality in those spots, and, right now, his claim to fame was beating a seriously exposed Churchill last time in the GI Queen Elizabeth II at Ascot on Champions Day—except he beat him for 2nd. Now he’s shipping across the country on two weeks’ rest and will be an underlaid price; no thanks.

Juvenile: Bolt d’Oro is a superstar

With all due respect to the 11 others in the Juvenile, there’s the winner, and, well, the 11 others. Bolt d’Oro should be able to name the score over a relatively non-descript group that are slow on paper and facing a champion that has been dazzling for many different reasons in all three starts and wins. Take the free square and move on, but get a hint of value in your exacta by hammering a straight punch with the maiden Good Magic, who has yet to scratch the surface of his talent and should relish two turns.

Turf: No, this is not a replay

Last year, to the surprise of many, Highland Reel blitzed to the front and held his position every step of the way to win the turf. His campaign has been a bit dicey this year, but expect him to do much the same again, as not only is he the fastest horse early, but he’s drawn inside too, and his main pace rival, Oscar Performance, showed his connections last time in the GI Joe Hirsch, that he wants nothing to do with 1 ½ miles. I don’t know if Highland Reel will repeat in the Turf, but I do know he’ll be clear and winging again.

Classic: Get the golden sombrero ready for Gun Runner

By all indications, Gun Runner, the top-ranked horse in the country, has never been better and is ready to run the race of his life. Except there’s a big elephant in the room, and that is that he’s 0-for-3 at 1 ¼ miles. Sure, he may be a better animal now than the one who was third in the Derby and Travers and 2nd in the Dubai World Cup, but until he shows he can do it, it’s just not something to bet on. And there’s a lot to think he won’t do it Saturday, as there’s legitimate pace to his outside in Collected, now to mention his old nemesis Arrogate is back and the streaking 3-year-old West Coast is here too. I’ve said it for well over a year and I’ll say it again right now; Gun Runner is this generation’s Medaglia d’Oro, which means he’s Hall of Fame up to 1 1/8 miles, and simply just very good at 1 ¼ miles.