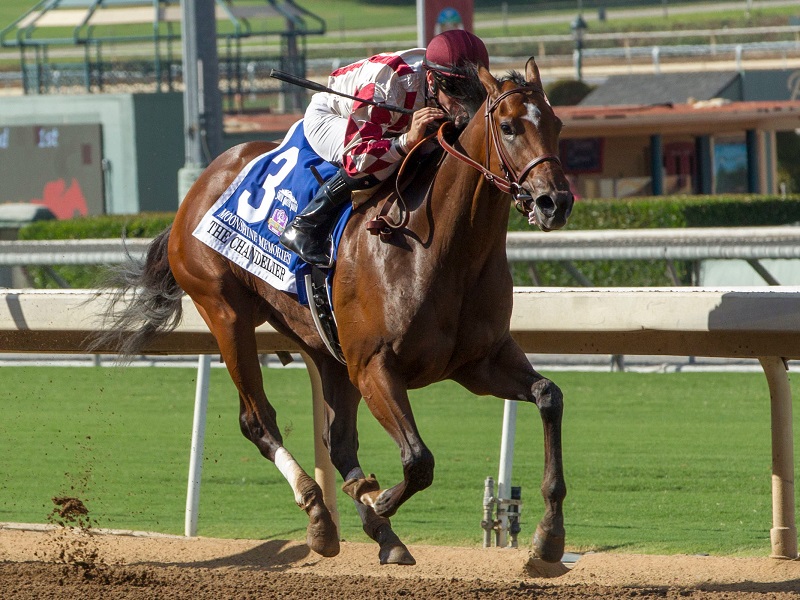 This is Day 2 of the Breeders’ Cup, when you approach clicking your online bets with a little more vim and vigor that you would on a Wednesday, and it’s always an exciting time when you decide to tackle this great challenge.

While the events culminate with a great Classic, nothing takes a back seat today. Here’s how I see the Breeders’ Cup races shaking out today:

If you’ve been waiting for Moonshine Memories to do something wrong, you might have to wait even longer. The Malibu Moon filly has done everything asked of her, including stretching out to two turns in the Chandelier. Flavien Prat will not allow her to drop more than a stride or two off the lead and she can grind out another win over the track over which she’s won two of her three starts.

Moonshine Memories is 7-2 on the morning line, which seems like a fair price. I’ll look at a straight win play and will also use her with Heavenly Love, Caledonia Road and Separationofpowers  in the exotics.

Hard to find a horse in better form than Disco Partner. He’s a short distance specialist and can tune it up for the five furlongs.He’ll have to do it from well off the pace, which is tough at the distance, but he’s generally answered the call when asked for his best in the stretch. He’ll go when he needs to go.

Clearly Lady Aurelia and Marsha bring top credentials and will likely get their share of it. But for the value, Disco Partner is a good win-place play to begin, and a good partner with the two aforementioned fillies and Washington DC in the exotics.

Unique Bella is 9-5 and beating her will be a chore. She’s been dominant and distance really hasn’t mattered. Her only seven-furlong try resulted in a romp, and she is no stranger to the track as this is where she broke her maiden by 10 1-4 lengths.

Finley’sluckycharm, Paulassilving and Highway Star are the choice here to share in the payoffs, and while this is chock full of proven fillies and mares, Unique Bella looks solid.

Avenge is 8-1 on the line and won the Grade 1 Rodeo last time out and will have a chance to pop to the lead and set all the pace. It will not be an easy task, to be sure, but if she can back them up a bit on the front end, her chances of an upset are legit. War Flag, Lady Eli and Grand Jete are the top challengers and Avenge will have her work cut out for her. But the reward will be a good one for her supporters if she can get it done.

Beating Drefong will be a tall order, but the Sprint always has sharp frontrunners, and there should be plenty of pressure out front.  When looking for a deadly closer in a such a race, a horse like Whitmore jumps off the page. Exclusively a sprinter since last December, he’s been a one-turn specialist. He’s 7 of 9 at the distance and will should be rolling at the end. In addition to Drefong, Roy H and Ransom the Moon are definitely worthy of hooking to Whitmore in the exotics.

Ribchester gets the edge in a wide-open race, and there are many possibilities for healthy payoffs. World Approval has been lights out lately and will be the one to catch, and Suedois and Karar also are in good form and warrant a long look.

Ribchester just missed to Persuasive in the QE II Stakes at Ascot and just doesn’t seem to ever be knocked far off his perch. He’s 14 of 15 on the board and takes a load of support everywhere he surfaces. With so many contenders, a win ticket should be play from your bankroll, along with exotics plays from Ribchester to World Approval, Suedois and Karar.

Bolt D’Oro is the powerful home team in this one and they’ll have to improve to keep this one from getting his 4th straight win against no losses. What makes him so very strong is his ability to adjust to any pace or at any distance up to this point.

Bolt D’Oro is probably the closest thing to a single, if you feel you need one. While seeing him a definitely the one to beat, I use extreme caution in such cases. This is the Breeders’ Cup and while others don’t have the same credentials, there really isn’t a bum in the lot. Firenze Fire, Solomini and Free Drop Billy look like the toughest challengers and if any of those can pull the upset, the monetary reward will be a big one.

Ulysses is one of the top runners in Europe and will have a chance to make amends for his 4th-place finish behind Highland Reel and others in last year’s Turf. He’s coming in for a solid 3rd in the Arc and de Trimophe after a sharp win in the Juddmonte International.

Ulysses is 7-2 and might not be that short. And if that’s the case, a win play would be a good place to start. Hooking up with Highland Reel, Sadler’s Joy and Beach Patrol in the exotics will bring a decent play. There’s nothing like an odds-on favorite here, so anyway you slice it, there are enough serious contenders and a good payoff will be bad regardless of how it comes.

I jumped on the Gun Runner bandwagon early in the year, and I don’t see this as a jumping-off point.

His victories have been achieved in such easy fashion, there’s no other approach than to believe he’s just getting better and better. He’s been punched around a couple times by Arrogate, but those two horses seem to be much closer together than they were early in the year.

An Arrogate win, of course, is highly possible, and if he runs back to his very best races, the others – including Gun Runner – likely will be running for second. But things change, horses get closer together in ability, and anyone who thinks Gun Runner might be too highly regarded simply hasn’t been watching him lately. Gun Runner and Arrogate are the anchors of the multi-race exotics, but Collected and West Coast supporters would be handsomely rewarded if one of those two up-and-comers can pull the upset.